January 15, 2019by Will MichaelsNo CommentsAll, History 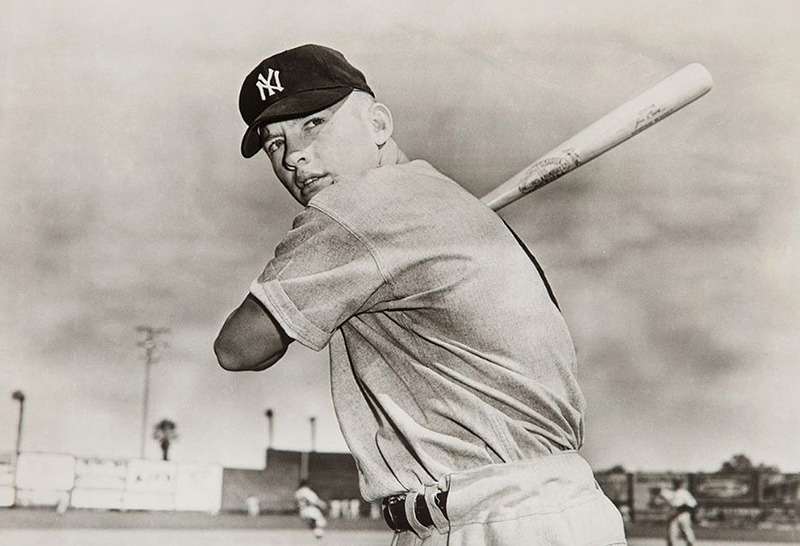 Among the many Major League baseball greats to walk the streets of St. Petersburg was Mickey Mantle. Mantle was three times Most Valuable Player, Triple Crown winner in 1956, and still holds the record for World Series home runs at 18. He was a switch hitter, one of only 8 among position players on MLB rosters in 1951. Many regard him the greatest switch hitter ever. His collar size was 18, and one of his nicknames was ‘Muscles.’ But he did no weight training, nor did he use a protein diet, or work with a personal trainer in the off seasons. 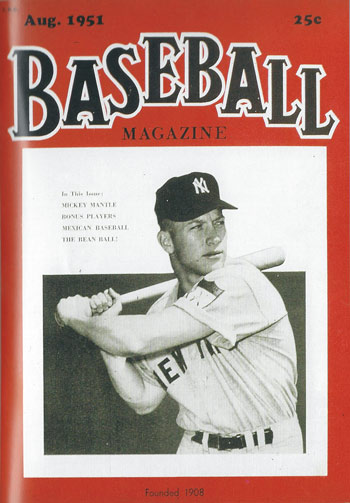 At the age of 17 in 1949, Mickey Mantle was recruited by the New York Yankees. After three years in the minor leagues and the Yankees instructional camp, he was called up to the Yankees Major League Team in 1951 at the age of 19. The Yankees won the pennant in 1951 and Mickey found himself at right field in the World Series. In the second game of the World Series, Willie Mays hit a fly ball to right-center field and Mickey ran for the ball as did center fielder Joe DiMaggio. Joe called for the ball and as Mickey maneuvered out of his way, he tripped over an exposed drain pipe and severely injured his right knee. This was the first of numerous injuries that plagued his 18-year career with the Yankees. He played the rest of his career with a torn ACL, but his leg injuries did not slow him down. He had the highest stolen-base percentage in history at the time of his retirement.

In the 1950s, St. Petersburg could rightly claim to be the Spring Training Capital of the World. Between 1914 and 2008, nine major league teams spring trained in St. Petersburg, sometimes two in the same year. The Yankees first arrived in 1925 – with Babe Ruth – and continued through 1961, with some gaps in between. They were in St. Pete continuously from ’52 to ’61 and so was Mickey Mantle. During that time, the Yankees used Miller Huggins Field at Crescent Lake while the St. Louis Cardinals used Al Lang Field. Typically, the spring training season started in late February and ran through early April.

While a major reason for the Yankees selecting St. Pete for their spring training was our mild, sunny weather, the 1952 season began with unseasonably cold weather. Some of the Yankees wished they were back in Arizona where they spent the ’51 season. Mickey began the season with a light workout, still favoring the knee he injured in the previous year’s World Series. When interviewed in St. Pete about his less-than-stellar performance, he stated that he was “doggone scared” of the American League pitchers he had never seen but had read so much about. “I don’t think I’ll be scared any more. Not that I think I know all about the pitchers. Far from it. It is just that I think I have been through the mill. A year’s experience… means so much.” When asked about being groomed to be Joe DiMaggio’s successor, he stated, “I don’t consider myself that. How can anyone think that when I haven’t proved yet I can play here regularly. I’m just out to win a regular job. I don’t even know if I can make it, although I’m going to try my best.” 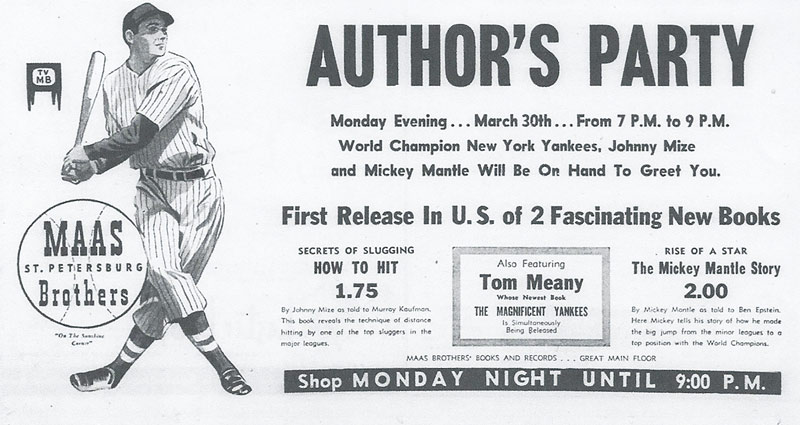 Yankees manager Casey Stengel maintained the suspense about who would replace DiMaggio. “I’ve got five outfielders, any one of whom could be a regular on any other club.” He went on to name names, saying of Mickey, “Mantle is a big leaguer all the way. He is going to be great.” Stengel proceeded to experiment with his team during spring training, even trying Mickey out at shortstop. Associated Press (AP) sports writer Joe Reichler – in summing up the ’52 spring training season throughout Florida – did not have much to say about Mickey, describing him merely as the “most reticent” of all the players. That most reticent player went on to be the Yankees hitting star in the 1952 World Series with an on-base percentage above .400 and a slugging percentage above .600. 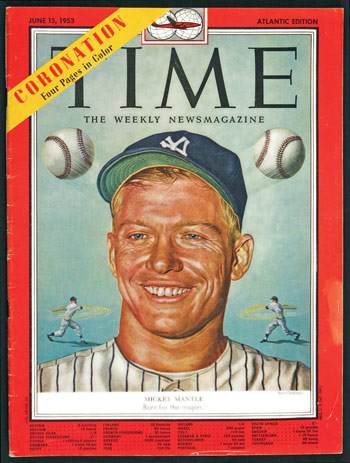 The ’53 spring training season began with nationally syndicated sportswriter Grantland Rice declaring, “St. Petersburg now happens to house the two greatest ballplayers in the game. Their names are Stan Musial and Mickey Mantle. They are the two best left today.” He continued, “One is just coming up with most of his career ahead. The other is at the top of the hill, going over, with most of his career in the past.” He described Mickey as having “speed, power, great natural skill, and all the distinct signs of superior class.”

Another nationally syndicated sports writer, Red Smith, reporting from St. Pete observed, “This is St. Petersburg in the spring, as seen on any sunny afternoon from the rooftop press box at Al Lang Field. The green benches which line the streets are all occupied by spectators watching the cars pour past at 12 miles an hour. Beyond the left field fence, white sails scud across the blue waters of Tampa Bay, and now and then a plane drones over the waterfront airport. From a small stadium beyond the parking lot comes the clink-clank of horse shoes as the bloods of the town do battle, neither giving nor asking quarter. Down on the velvet geometry of the diamond, professional ball players are running, hitting, throwing, sweating.”

One of these ball players was Mickey Mantle. Smith noted manager Casey Stengel watching Mickey closely. Stengel had positioned Mickey batting clean-up (4th) for the spring season. Red Smith fantasized Stengel thinking, “Can a man who struck out 103 times in the 1952 season really be my clean-up hitter?” The answer appeared to be “yes.” In the game Smith was watching, the Yanks beat the Tigers 5-0. It was reported “Mantle continued his batting rampage with two singles… boosting his Spring training average to .444.” Later, on March 9th, the Yanks beat the Red Sox 6-4 in nearby Sarasota. Mickey was described as having “the biggest batting day for a Yankee against a trio of Bosox rookie righthanders, getting a double and a single in addition to his long [425-foot] home run.”

While the Yanks were in St. Petersburg that season, two new baseball books appeared on the shelves. One was The Mickey Mantle Story by Mickey Mantle as told to New York Daily Mirror sports writer Ben Epstein. It included a forward by Casey Stengel. The other was How to Hit by Yankee first baseman Johnny Mize. Both Mantle and Mize launched their books with a signing at Maas Brothers department store, now St. Petersburg College’s downtown location.

Following the ’53 spring season, Mickey went on to hit 21 homers during the regular season including a famous “tape-measure home run” initially said to travel 565 feet at Griffith Stadium in Washington, DC. (Years later, experts concluded the home run at somewhat over 500 feet in the air, rolling further after it hit a house.) 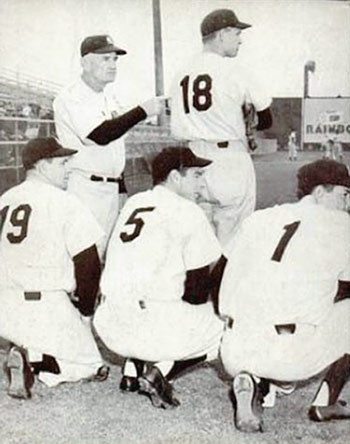 Casey Stengel and team. New York Yankees
act out hopes for their 18th pennant in 1951.
Manager Casey Stengel points to #18 on Bob
Muncrief’s back, while combined uniforms
(L-R) Frank Shea, Joe DiMaggio, and Jim
Brideweser form the calendar year. The
Yankees won both the pennant and the World
Series, with Mickey Mantle briefly playing
right field in the Series

The ’54 spring season began with the press again reporting on the condition of Mickey’s knee. In November, he had torn cartilage removed, and in February a cyst was removed. Referring to Mickey as “a baby-faced baseball player just past voting age,” news of the cyst was carried by Associated Press on its ‘A’ wire, a line reserved for news of the greatest importance.

Mickey began training restricted to jogging and hitting righthanded to reduce the weight on his healing right leg. (Righthanded hitters put more weight on their left leg.) But these restrictions did not interfere with his batting. During practice, he hit the centerfield fence at Miller Huggins Field, a distance of a little over 400 feet. Then he did the same with the rightfield fence.

Needless to say Mickey had many fans that came to see him at spring training in St. Pete. One in particular was Billy Gerhards, a ten-year-old boy who lived with his parents in Germany. His father was an Army sergeant. Billy was selected from among hundreds of American boys in Germany to tour the USA as guests of NBC-TV. In addition to baseball, one of Billy’s hobbies was building model planes. When asked what he wanted to do most, Billy said, “Shake hands with Mickey Mantle.” Before arriving at Miller Huggins Field to get his wish, Billy visited the History Museum to see a model of the First Airliner flown by Tony Jannus, and a game played by the famed Kids and Kubs Softball League of players 75 years of age and older. (The ‘Kids’ still play weekly at Northshore Park.) 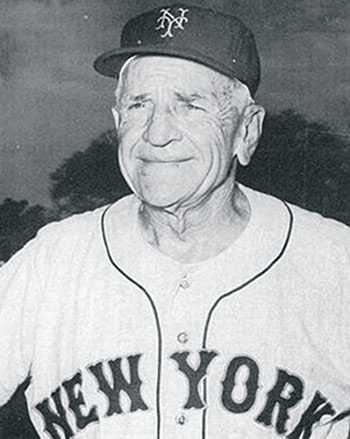 
Times sports writer Jack Ellison noted regarding the ’55 spring season that “there are so many St. Petersburg datelines appearing in the nation’s press these days that I hear the Reds are kicking themselves for changing the name of that city from St. Petersburg to Stalingrad.” He went on to note the Havana Yacht Race, the St. Petersburg Golf Open, and of course the Yankees and other major league baseball teams playing in St. Petersburg.

For Mickey, the season began very much as a family affair. In addition to Mickey, his twin brothers (Ray and Roy) had also been signed by the Yanks to a Class D team and were playing at Crescent Lake at the Rookie School which preceded spring training. His cousin Max – also a Yankees minor league player – was there as well. None of his brothers or cousin, though, ever made it to the major league.

Mickey did not make his mark that year in spring training until an away game with the Milwaukee Braves in Bradenton in mid-March. Up until that game, he was hitless in 12 times at bat. But at the Braves game, he drove in six runs with a grand slam homer and three other hits. He also went on to be one of three major-leaguers to ever clear the rightfield fence at Lakeland. It was there that after a game, a young boy ran up to him while he was waiting for the bus and asked him to autograph a ball. “It’s the one you hit the homer with I went and got it.” Mickey looked at the boy quizzically and asked, “How’d you get back so soon?” 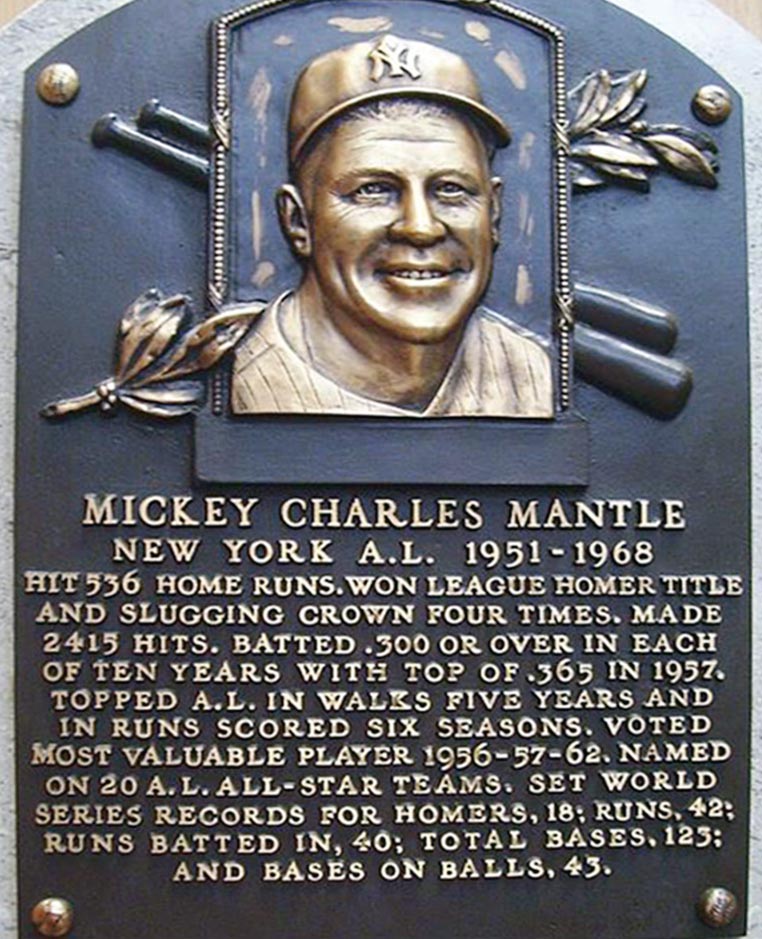 Mickey’s plaque at the National Baseball Hall of Fame. Mickey was inducted in 1974.

This is Part 1 of a two-part series. Part 2 will include the story of St. Petersburg native Bill Bond, Jr. who was a Yankees’ batboy in 1960 among others. Persons having recollections of Mickey Mantle or comments are invited to contact Will at wmichaels2222@gmail.com or 727-420-9195