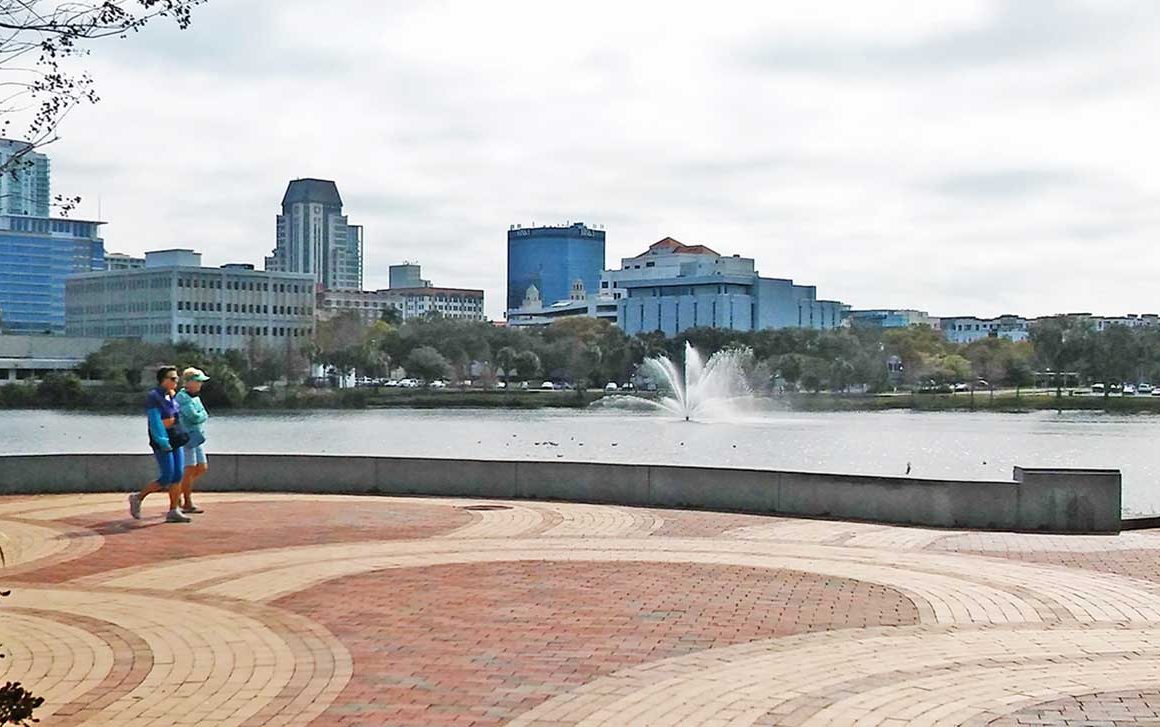 Take a stroll around the Mirror Lake neighborhood and soak in the beauty and history of the area, as well as the unique architecture of the buildings. The neighborhood is rich in 1920s-era architecture and a feast for the eyes. Styles include Beaux Arts, Masonry Vernacular, Mediterranean Revival, Modern, and Moorish. More recent buildings include the modernist Judicial Building, the Sebring State Offices, and Wannemacher-Jensen Architects.

Mirror Lake itself is the only lake downtown and believed to be part of a string of ancient lakes that also includes Crescent Lake. The lakes offered Native Americans a source of fresh water long before Europeans arrived. H.A. Weir acquired 40 acres near Mirror Lake in 1876, and for a while the lake was known as Weir Lake. The city’s original plat included about two-thirds of Mirror Lake, then called Reservoir Lake. It was of quite different shape than the present arrowhead configuration.

During the Spanish-American War (1898), the US War Department sought a supply of pure water for troops stationed in Tampa. The Tampa water supply was inadequate and brackish. Tests were made of the water in Reservoir Lake, and it was shown that the water was of excellent quality, despite the many alligators present. A pipe was run from the lake to the end of the railroad pier at what is now Demens Landing, and water was taken by boat to Tampa. In 1889, the city constructed a water tower at the corner of 5th Street and 2nd Avenue, and ran several water mains connecting the downtown to the lake, providing water to downtown residents.

The City Council passed an ordinance in 1910 establishing all lands owned by the city around Reservoir Lake as a city park. In 1912, developer C. Perry Snell ceded land that he owned west of the lake to add to the park. The last piece of private land abutting the park was acquired by the city in 1916. The city dredged and filled the lake to give it the shape seen today. The sand dredged from the lake was used to fill a swampy area to the north. Katherine Bell Tippetts – founder of the St. Petersburg Audubon Society, and perhaps the city’s most renowned environmentalist – had the city rename Reservoir Lake as Mirror Lake in 1915. The lake may be appreciated from virtually any side, but there are two special viewing plazas, a small one at the northeast corner and a much larger one at the northwest corner.

A host of historic buildings surrounds the lake, including six designated city landmarks. Let us begin with City Hall at the corner of 5th Street and 2nd Avenue North. City Hall was built in 1937 largely with federal Depression-era “stimulus funds.” One of the stipulations of the grant was that it could not be used for city halls, so the structure was declared a “Municipal Utilities Building.” The architecture is elegant Mediterranean Revival with Moderne elements. It is as beautiful on the inside as on the outside. The building has recently been refurbished. The City Council chambers include Florida landscape and wildlife murals by noted Florida artist Christopher Still.

Just to the north of City Hall is the little-noticed Poulson Apartments built in 1919 in the Masonry Vernacular style. At the foot of 3rd Avenue is the 1915 Mirror Lake Carnegie Library, certainly one of the most architecturally distinctive libraries in the city, built in the rare Beaux Arts style. Securing a Carnegie Foundation grant for the library was the work of early city councilman Ralph Veillard, St. Petersburg Times editor William L. Straub, and civic activist Annie McCrae.

To the north of the library is the Mirror Lake Recreation Complex, but just before the complex is a giant Banyan-like tree, the equal of the historic Banyan trees on Beach Drive. The complex itself encompasses several distinctive buildings: the Sunshine Center, the Lawn Bowling Club, the Shuffleboard Club, the Chess Club, and the Coliseum. The Lawn Bowling Club (1915) is the oldest lawn-bowling club in Florida and the 10th oldest in the nation. The Chess Club dates from 1931. The Shuffleboard Club is the first organized shuffleboard club in the United States. By 1944, it had become the world’s largest with 5,000 members. North of the Shuffleboard Courts is the Coliseum, which has hosted dances, graduations, musical performances, inaugural balls, Martin Luther King t was built, the Coliseum was considered the “largest and finest” dance hall south of Washington, D C. The original white-maple flooring was overlaid with red oak in 1989. Over the years, entertainers such as Harry James, Rudy Valee, and Will Rogers, performed there. Aimee Semple McPherson evangelized there, and in 1985, Ron Howard’s film Cocoon filmed dance scenes there.

Strolling west on Mirror Lake Drive is St. Petersburg’s third high school building, which operated from 1919 to 1926. It later became an adult-education center and is now the 70-unit Mirror Lake Condominiums. Built in the Mission Revival style, the high school’s main features include seven grand arched windows, each with a coat-of-arms-like medallion at the top, and the richly finished columns on each side of the main entrance.

At the northwest corner of the lake is the 1926 Mirror Lake Lyceum, originally First Christian Church, built in the Mediterranean Revival and Spanish styles. The church’s two-story-high sanctuary was built to accommodate 1,000 people. The building is now occupied by Bridgepoint Church, with the Lyceum sanctuary still available for rentals.

Next in line walking south is Tomlinson Adult Education Center, originally built in 1924 as a junior high school. The building is in the Mediterranean style with two large owl statues gracing the top of the main entrance columns. In 1935, the school was named after Edwin H. Tomlinson, St. Petersburg’s greatest benefactor. Tomlinson’s beneficence included the Manual Training School next to City Hall, a 2,500-seat gymnasium and auditorium no longer standing, and St. Peter’s Episcopal Church (now Cathedral). He also helped donate the city’s first hospital.

Several residences still exist on Mirror Lake Drive. One of the most unique is a 1936 home constructed by master builder Cade Allen, most known for his use of stone, marble, and granite employed in the Allendale neighborhood. Close by is the 1929 Unitarian Universalist Church built in the Mediterranean or Mission style complete with bell tower and buttresses. A modern addition is the work of noted architects William Harvard and Blanchard Jolly. The office of Wannemacher-Jensen Architects is most recent structure on Mirror Lake Drive.

We end our tour with two mid-century buildings. One is the St. Petersburg Judicial Building, one of the city’s rare examples of Brutalist architecture. Unique features are the elevated plaza and arcade. The building was designed by Glenn Quincy Johnson. Johnson also designed the very different ‘Bird Cage’ homes at Pinellas Point with George Ely. A second structure is the modern Sebring State Office Building, also designed by Johnson with other partners.

A proposal to designate Mirror Lake as an Historic District in order to better protect the community character of this special place is currently under study by the city. St. Pete resident Drexey Smith has no regrets about moving from her previous home in the Old Northeast to Mirror Lake. “I am the same distance from downtown as I was before, but it is much different. Now my view is Mirror Lake with Tampa Bay in the distance, the beautiful sky, birds on the lake, and the tremendous building boom going on downtown,” said Smith. “I wake up each morning to a lovely sunrise. My neighbors are supportive and kind and many have lived here for over 30 years. I can walk around a lovely lake, go to the library, stop in for coffee, walk, and visit the Pier. Mirror Lake is a special place that needs to be preserved from being over-built by developers moving west. That is my greatest concern. I love it here.”