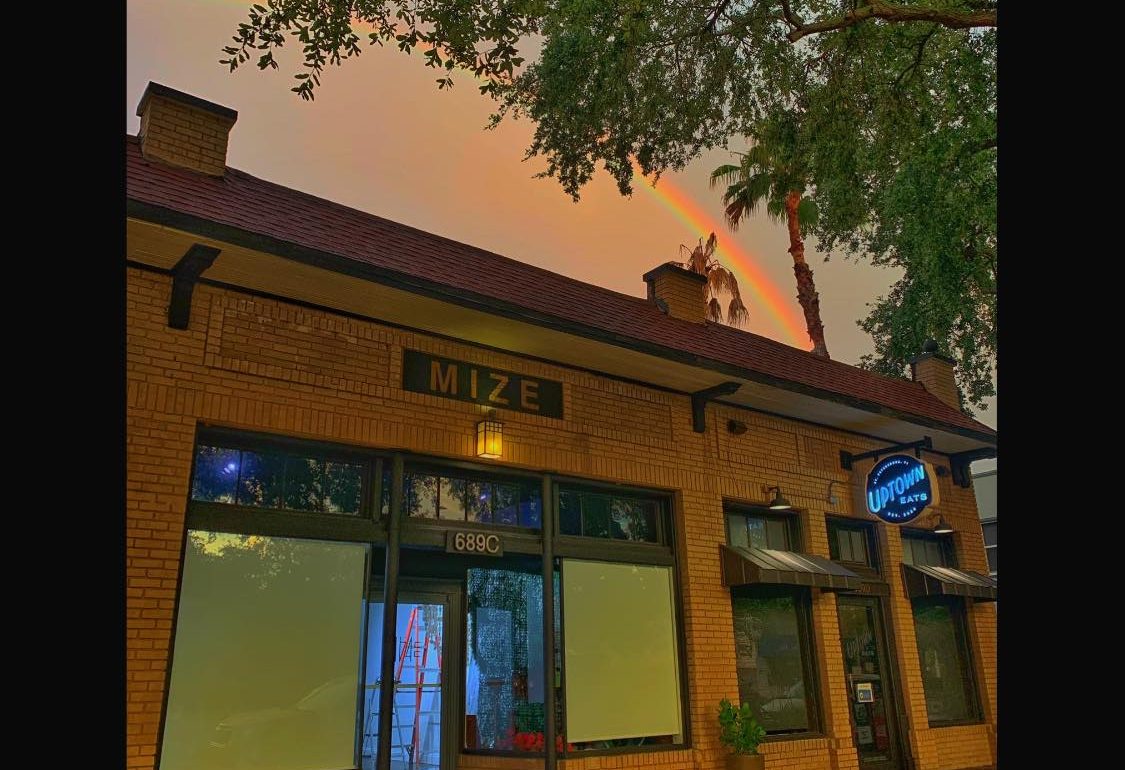 Chad Mize, a St. Petersburg artist known for his punchy graphics and mural work, is closing the locally renowned MIZE Gallery this December. The space will become an extension of Uptown Eats, a breakfast and brunch spot next door. In 2017, Mize opened the small space after swearing to never open another gallery again; he previously owned now shuttered St. Pete gallery Blue Lucy.

“I just got the itch and I had too,” Mize said of his change of heart. “So, I opened MIZE. I think it turned out.”

For five years, Mize put on one exhibit a month and invited artists, art-lovers, and anyone eager to check out local art to his gallery on M.L.K. Jr St. N. The gallery showcased creators with both big and small reputations, and held exhibits ranging from the famously annual STUFF & THINGS & STUFF holiday show, NUDE, and LGBTQ+ themed events such as 2021’s celebratory Pride show, Rainbow.

Rhys Meatyard, a nonbinary graphic artist and painter in St. Pete, says the MIZE Gallery owner got them back into the art scene. “The first show I participated in at MIZE was Sup Cones 2 in 2019, which was the first show I’d been a part of in many years,” Meatyard said. “I’d been encouraged by Chad to participate in his shows for years, but I felt for the longest time that I didn’t have what it took. If it wasn’t for the encouragement of people like Chad in the community, I’m not sure I would have gotten back into it.”

New Orleans-born Mize grew up in Tampa Bay, lived in Boston for a brief bit, and moved back to the Pinellas area in 2003. He’s been creating art here ever since.

The gallery’s closing is, more than anything, a much-needed change for Mize. On top of running the gallery, he is a muralist and is responsible for many public art pieces in the city, including the famed “Twiggy” mural downtown.

“I did hit fatigue after about four years,” Mize told the Northeast Journal in October. “But I wanted to keep the gallery open for at least five. I didn’t want to flake. I wanted a community space to be established, where emerging artists could be displayed next to people like Nancy Cohen.”

Though the gallery is closing, its location is staying in the family. The space that once housed MIZE will be absorbed by Uptown Eats, a popular breakfast spot owned by Dan Schmidt, Mize’s fiancé.

“I look at it all very positively, knowing that Chad knows exactly what is right for him and will succeed in whatever his future path is,” said Schmidt. “For the restaurant space, it’s natural growth, giving us more space to work and serve people.”

The new space from the former gallery will become an additional seating area and storage unit for the restaurant. And yes, there will be art, including a few pieces from Mize himself.

Aside from the artists Mize exhibits in his gallery, his right-hand employee was graphic design artist Andrea Pawlisz. The two met socially at an event in 2010, and Pawlisz began working for him as well as exhibiting her pop-art inspired work. She’s sad to see the gallery go, but being one of the first people to know, she understands Mize’s position.

“At first, yeah I was sad, but life is about certain cycles,” Pawlisz said. “The gallery took up a lot of time, and I respect his personal aspirations and goals. He’s wanted to do this for years; it wasn’t like I was left out in the cold.”

Pawlisz has been with MIZE through 30 shows, including her own solo show, and worked at the gallery through the COVID-19 closure. The artist says it wasn’t uncommon to see 500 people pooling in and out of the gallery on an opening night, typically Friday.

Always-on Mize was the man who put together marketing, promotion, and front-of-house work. Pawlisz jokingly calls herself “the bad cop” and was more hands-on with the physical work behind each exhibit. “What makes it special is that Chad never pushed sales; he just has a knack for bringing people together,” she told the Northeast Journal.

The building’s lease is up December 31, and Mize plans to enter 2023 with a fresh start, and a heartfelt goodbye. “The uptown neighborhood has changed so much since we opened,” Mize said. “It’s a powerful community.”

The gallery’s last show will be the STUFF & THINGS & STUFF exhibit this December. Mize says he’ll end the era with a block party outside MIZE, which sits in St. Pete’s historic uptown neighborhood at 689 Dr M.L.K. Jr St. N.

What’s next for Mize personally? It’s open-ended, but it’s likely he’ll keep creating magic in Tampa Bay. “Anything he touches turns to gold,” said Pawlisz. “Chad’s thing at the gallery was the fact that it was approachable, it was for everybody. I’m sure he’ll carry that feeling on.”