September 9, 2016by adminNEJ3 CommentsAll, Spotlight on the Arts 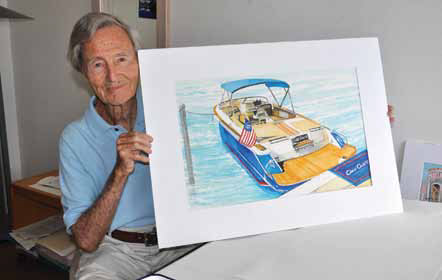 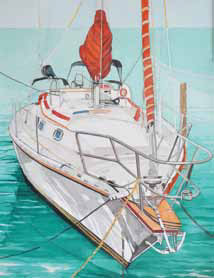 The tortured artist he is not. In fact, John Harte is quite the opposite: an octogenarian with a ready smile and friendly disposition whose work in watercolors is well known by many in St. Petersburg. Fortunately for us, he is displaying some of his work at USF St. Petersburg. The exhibition will feature John’s delicate and precise paintings of butterflies, moths, and other insects. This exhibition is currently on display at the Nelson Poynter Memorial Library at USF located at 780 3rd Street South.

John’s use of watercolors represents a certain amount of control, and his style allows for very detailed and colorful depictions. His favorite compositions are inspired by nature. His clean style of painting may be attributable to his early career as a commercial artist with the Continental Can Company. John’s assignments incorporated both text and illustrations, promoting Continental Can’s packaging capabilities. Some of these assignments included can labels to attract consumers purchasing a diverse array of contents.

An adventurer and outdoorsman, John was initially inspired by the nature surrounding his childhood home in Nebraska. His undergraduate studies brought him to the University of Wyoming, where his love of the outdoors led to a decades-long interest in hiking. John attributes his good health and continued mobility as a senior to the great amount of walking he does. He doesn’t own a car anymore… nor a television or computer. It seems that from an early age, the outdoors beckoned to John, and he follows, finding inspiration along the way. 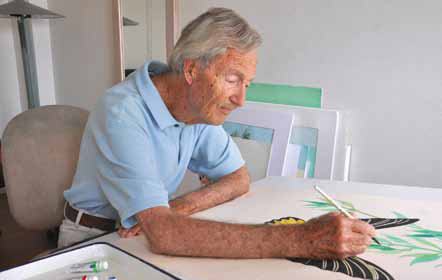 During his stint with Continental Can in Chicago, John continued his studies at the Chicago Art Institute. He spent time working in New York, on Park Avenue, amazingly across the street from Grand Central Station. Then, in Washington, DC, he met his wife, Dorothy, who shared his love of the outdoors. Next, his career took him in a new direction when he was hired by Chevron and once again relocated, this time to the San Francisco Bay Area. The Bay Area provided continuing opportunities for John to expand and exercise his artistic talents. His passion drove him to become one of the promoters and contributors to the Marin County Society of Artists. One of his very first exhibitions came at the Lucien Labaudt Gallery in San Francisco. He continued his artistic studies at the College of Arts and Crafts in Oakland.

John and Dorothy immersed themselves in the beauty of the outdoors, and used their free time to explore many destinations. With obvious enthusiasm, John told me about visits to Mt. Hood, Mt. Ranier, Yosemite Falls, and a long list of other destinations. Memories about his adventures with Dorothy included a story about glissading in tin pants down a glacier! Seriously, look it up on the internet… You can still buy tin pants for what is termed, a ‘controlled slide’ down snow-covered mountainous terrain. It is recommended that you carry a pick ax for controlling the speed of descent.

In 1978, John took early retirement and moved to Key West, where he restored a Bahamian-style home earning it recognition on the National Historic Register. The lush tropical foliage of the Keys and other destinations south were incorporated into John’s love of painting. John and Dorothy have enjoyed an active retirement lifestyle, travelling to many thrilling destinations. They flew around the world with what was then known as Pan Am Airways, with stops in India, Greece, and Turkey. A month in Spain allowed John to practice his Spanish language skills, a minor in his college career. 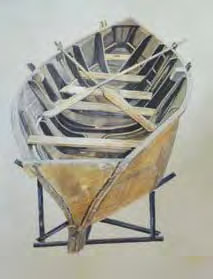 Several more cities were home for John and Dorothy before they moved to St. Petersburg in 2001. Of note, the Palm Springs area of California was inspirational to John’s artistic side, and he began to specialize in one-man exhibits featuring the plants, animals, and vistas of our beautiful National Parks such as Mesa Verde, the Grand Canyon, and the Joshua Tree National Park. His beautiful works can be seen in permanent collections of many museums from Miami (Historical Museum of Southern Florida) to Palm Springs, CA (Palm Springs Desert Museum).

In St. Petersburg, John found more opportunities to share his art including a one-artist exhibition at The Studio@620 (named for its location at 620 1st Avenue South) in 2014. His work has been commissioned by individuals and corporations alike, including Loews Hotels. His work can be seen nearby in the Don Cesar Hotel at St. Petersburg Beach, Museum of Fine Arts on Beach Drive, and Red Cloud Indian Arts, to name a few permanent collections. In addition, locals have discovered John’s talent and he has been commissioned to paint the likeness of boats, homes, and even pets.

« Previous post
A Vision from Our Youth: We Built this City!
Next post »
The Neighbor Everyone Knows