November 18, 2020by Jon Kile3 CommentsAll, Miscellaneous, Spotlight on the Arts 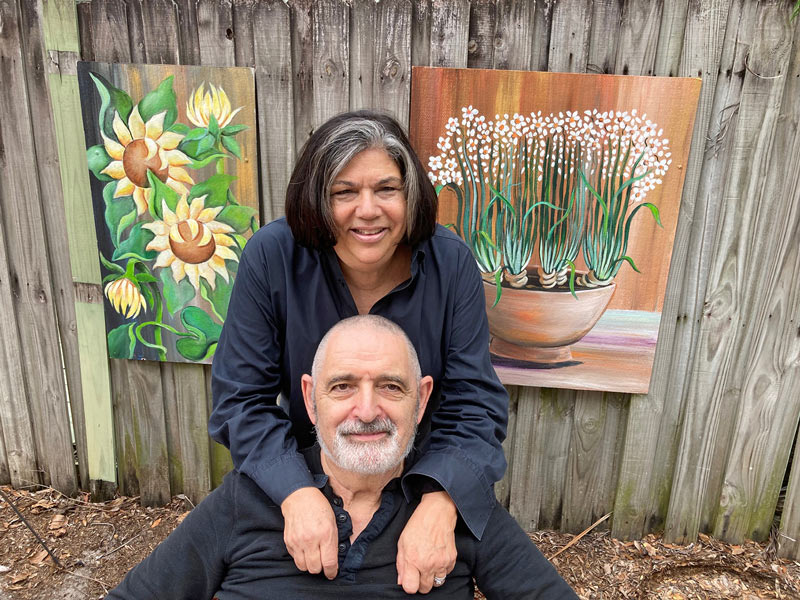 Not long after I arrived at Michelle Passoff and Andre Kupfermunz’s home in the Old Northeast, Andre informed me that although he was born in 1943, he’d just received the first copy of his actual birth certificate. The reason that Andre was born with a false birth record and the harrowing circumstances of his birth were just one of the many reasons I was there to talk to this fascinating, creative couple.

Both Andre and Michelle see obstacles as opportunities. And in Andre’s case, it might just be in his genes. He was born in Nazi-occupied France during World War II to Polish-Jewish parents who were Resistance fighters in the French “M.O.I.” When his mother went into labor, she was admitted to the hospital under a fake identity with the help of a friend who worked there. At Andre’s birth, he was also given false papers and baptized Catholic. But that was just the start. At a very young age, he was sent to live with distant relatives and friends in the countryside, who raised him as a young Catholic child in order to keep him safe from the authorities. It was not until after the war that he was reunited with his parents again in Belgium, where the family eventually emigrated.

Andre went on to have a long, successful career in international trade and to raise a family in Belgium. In addition to brokering import and export deals, he was fluent in five languages and specialized in trading with Communist countries. “I had to figure out how to buy and sell products in countries that had limited foreign exchange currencies,” he said, explaining the nature of his work.

The collapse of the Soviet Union changed the course of Andre’s life, setting him on a totally new path as an artist. He turned to sculpting as a way to access the emotions and trauma of his early childhood years when he had been separated from his parents. As he gained a reputation for his art, he visited New York City, where he hoped to exhibit, but the local art galleries were hesitant to take a chance on him based on just looking at photos. Not to be deterred, Andre found studio space at the prestigious Pratt Institute and before his six-month visa expired, he had created a series of ceramic sculptures that would demonstrate his talent. Eventually, Andre decided to move full-time to the U.S., first living in New York, then in the is first wife became ill and died.

Michelle grew up in New Jersey and graduated from the Newhouse School of Communication in Syracuse, NY, which led to a coveted public relations job at Coca Cola’s worldwide headquarters in Atlanta. Later, she worked in television media, first in Atlanta, and then New York, followed by a career as a public relations executive with major agencies. But, it was her interest in the idea of decluttering one’s life as a path to enlightenment and empowerment that set her on a new course. She began giving talks and seminars on the topic, which eventually led to writing a book.

“I started promoting my classes by taping up flyers with those little tear-offs on bus stops up and down Broadway in Manhattan,” she recounted. “After attending one of my classes, a reporter for the New York Times wrote an article about my unique viewpoint on being neat and tidy, and the next day I had an agent and a publisher for a book.”

Michelle was the late 1990s version of today’s Marie Kondo, the popular Japanese consultant, author, and TV show host known for encouraging people to discard knick-knacks that no longer “spark joy.” But, Michelle’s advice was more than just how to get rid of superfluous things – her focus was on the “power of energy in stuff” and the possibility of making room for productivity and fulfillment through addressing one’s environment. Her bestseller, Lighten Up! Free Yourself From Clutter, was a huge hit and she began giving talks all over the world.

She met Andre at a self-awareness workshop in New York City. “Andre and I were paired together to talk about relationships,” Michelle said with a laugh. They ran into each other again a year later in a related workshop conducted on a cruise and they have been together since. They’re about to celebrate their 15th anniversary. In 2002, after Michelle presented a decluttering workshop in Tampa, the couple decided they liked the area enough to buy an investment property here. To Andre’s amusement, it looked like Michelle was packing for more than vacation, and their move to South Tampa was soon permanent. They eventually expanded their property portfolio to include rentals in St. Pete, and three years ago, they decided to move over to this side of the Bay and make one of the rentals their permanent home.

Although Andre has been sculpting and painting for decades, it is only recently that Michelle has actively pursued her artistic side. “I hadn’t done art since kindergarten after I decided I wasn’t artistic because one of my classmates was praised for painting the best picture,” said Michelle. But one day when their grandchildren were visiting, what was initially just an idea for decorating a backyard gate soon transformed into a unique splatter-paint artwork on a section of corrugated metal. It was so striking, they hung it on an outdoor wall of their home, where it started to get noticed by friends and passersby.

After refining their technique, the couple began collaborating to create indoor and outdoor residential and commercial metal wall paintings for sale and commission. A large piece is installed on the storefront of Retrospect Furniture, a vintage store at 1820 16th Street North.

This past year, as COVID hit, they let go of their art studio in the Warehouse Arts District. And they reached out to the community with unique arts-related projects. Andre spearheaded Mask-R-Aid, inviting local artists to create unique, fantastical masks that went on display at Zazoo’d on Central Avenue, and then were auctioned off to benefit the St. Petersburg Arts Alliance Relief Fund. Michelle brought together local songwriters, performers, dancers, and music and video producers on Zoom to create an original music video to raise awareness about voting. Voice Your Vote generated over 50,000 hits on YouTube. The Northeast Journal covered the story in the last issue.

What’s next for them? Until Michelle and Andre moved to St. Pete in 2017, Andre had been offering a weekly Coffee and French Conversation With Andre at the Tampa library for the many Francophiles who live in the area. But driving across the bridge during rush hour traffic proved too much for him. Now, thanks to Zoom, Andre has decided to reinstate the group. It’s free of charge and held every Tuesday evening from 7-8pm. “It’s wonderful. We talk about everything and anything in French,” says Michelle, who joins in. While not as fluent as Andre, she’s conservant enough to talk to the grandchildren and to have acquired a Belgian citizenship. She and Andre are now dual citizens of the U.S. and Belgium. He invites readers to email him at andre@kupfermunz.com or call 813-598-7254 to get the Zoom link.

Michelle and Andre have a charisma and spirit that is contagious and it would have been easy to sit socially distanced with them for another two hours and talk over fresh-squeezed lemonade. Their lives have shown a resilience and adaptive quality that allows them to not only survive adversity, but to thrive as well. In addition to the art they do together, Andre continues his work in ceramic sculpture and Michelle enjoys photography. To see their work visit their website at www.mpakartanddesign.com.