One Night Only: Our Elusive Nightblooming 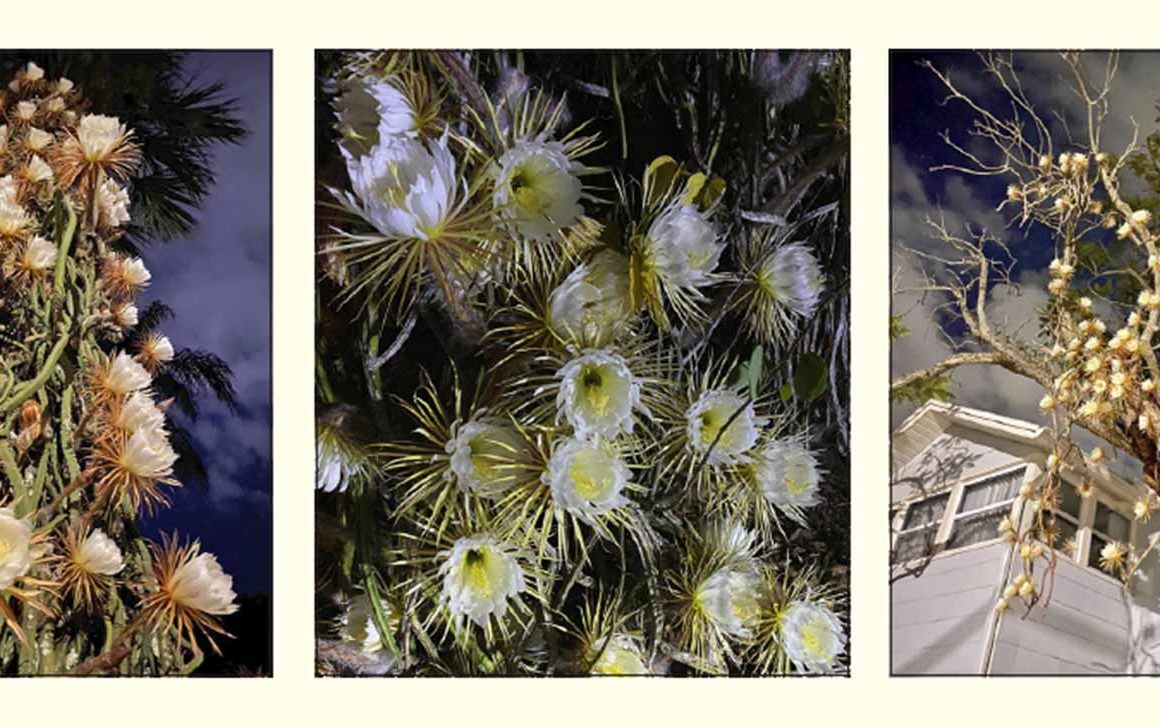 Emily Elwyn’s on a mission, and she won’t be stopped. Not by a pandemic, not by the summer heat, and certainly not by the elusive nature of what she seeks – the nightblooming cereus. You may have seen one, but probably not in bloom.

Unbloomed, the nightblooming cereus looks like a cactus and a vine had a spiky love child. When it blooms, though, it’s a spectacle of light and majesty, a post-twilight celebration. The white chalice-shaped blooms unfurl from the spiny cactus vine that can climb 30 feet into the air. For only a few hours – on just one night each year – they turn trees, telephone poles, and fences into summertime Christmas trees.

Elwyn, the past president of Preserve the ’Burg and an Old Northeast resident, learned about this sturdy, yet somehow delicate plant, as an undergrad at Emory.

“I had a roommate at Emory who was from Mississippi and a [writer] Eudora Welty fan,” Elwyn says, “who introduced the plant to me and the motto of Welty’s nightblooming cereus-watching friends: ‘Don’t take it to cereus, life is too mysterious.’” (Welty even started the “Night-Blooming Cereus Club” in Jackson, Mississippi.) “I have always been obsessed and tracked some blooms. Things changed in the summer of 2020.”

That’s when she realized she wasn’t the only one paying attention to the nightblooming cereus. While not unique to Old Northeast, the neighborhood boasts its share.

“During [the] first pandemic summer, I noticed I was not alone in my love for the plant,” says Elwyn. “I think because we were so starved for entertainment and lots of folks who travel in the summers were home, I kept running into groups of people gathering around the night bloomers.”

A group chat grew into a Facebook group that helped neighbors track the plants, when they might bloom, and – the best part for those who missed the fleeting blooms – photos of them in their full, white-night glory. Her fascination deepened, and she scoured the web, looking for historic references to the blooms in St. Petersburg – and found several mentions of newsworthy blooms, the earliest of which dated to 1908:

“The night blooming cereus are in bloom now. Dr. Ambercrombie has a large number of them and N.P. Hayes at his Central Avenue house has many,” the St. Petersburg Times article read, continuing on with a scientific description of the luminous blossoms and the vine. Although the article doesn’t give addresses, it does suggest that those who can find the homes should attempt to visit the flowers. A 1929 article in the same paper lists a night blooming cereus at 2770 1st Avenue North, and in 1937, a photo of the nightblooming cereus appeared – finally! – in the paper.

Elwyn calls them magical. “The night blooming cereus are one of the many things that makes St. Pete so special: Where else can you gather with a group of friends on hot June nights and watch the flowers open?”

Where else indeed. Technically, the plants are invasive, although not invasive enough to demand their removal. “I like to think they are the nice kind of invasive,” Elwyn says. “Like an exotic friend who found love in St. Pete, and decided to stay.”

« Previous post
What’s the Story Behind Your Home?
Next post »
A Venue for All: The Palladium Past and Present