Our Sunshine Center: A Community Treasure for Seniors 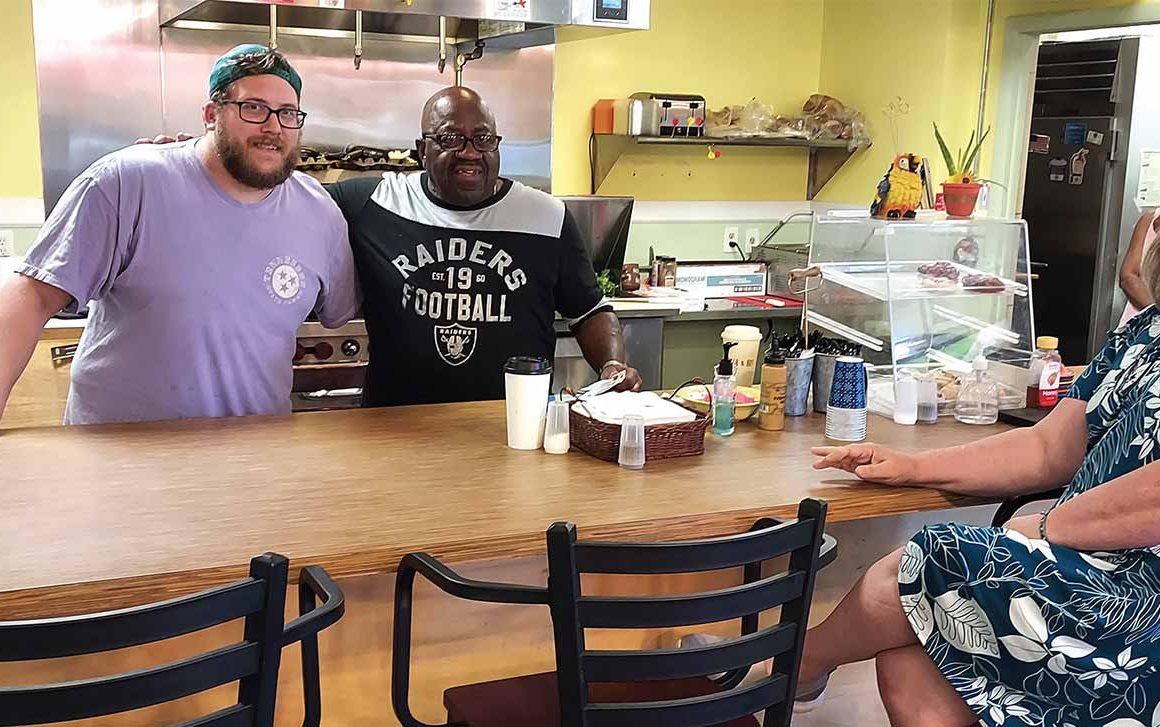 St. Petersburg was once known largely for its senior population, but that demographic did not begin to develop until about 1950. Between 1930 and 1940, the proportion of those 65 and older ranged from 10% to 15%, although this was still substantially higher than the total US population. In 1960, the percent of those 65 years and older was 28%, and peaked at 31% in 1970. As of 2019, the percentage was a fraction over 20%, still above the national average around 17%.

St. Petersburg has a long history of its senior population supporting the city, and the city offering a helping hand to seniors who need it. Retirees from other areas of the state and country invested their wealth in St. Pete and contributed substantially to the economy, especially in years of recession. To help sustain quality of life for all seniors, the city established a Commission on Aging and an Office on Aging in 1973; the first director of the City’s Office on Aging was Connie Rudd. It was Rudd who initiated the planning of what is now the multipurpose Sunshine Senior Center. Rudd obtained approximately $500,000 through a federal Community Development Block Grant to build the center and their mission is “to serve as a community focal point to enhance the quality of life of our citizens aged 50 and over.”

Located at 330 5th Street North and facing Mirror Lake, the Sunshine Center was specifically designed and furnished for use by seniors. True to its name, it’s a bright, cheerful place with lots of big windows to let the sunshine in. The windows open to a view of Mirror Lake and Banyan Tree Park. The slightly inclined walkways into the building and the sloped floor of the auditorium – named in memory of former center supervisor Martha M. Frappier – make the center accessible for wheelchair users and those with impaired mobility. Signs designating rooms and activity areas are large and contrasting, making it easier for visually challenged people to find their way. There are small, contained areas ideal for private conversation.

Gerald Buchert followed Rudd as director of the Office on Aging in 1976. Buchert was exceptionally qualified for the job, having previously served as bureau chief of Adult Services for the state. As director of the Office on Aging in St. Pete, he oversaw the opening of the Sunshine Center in 1977 and supervised its operation for 22 years. The Sunshine Center was the first senior center to receive the prestigious Florence R. Goldmann award from the Florida Association of Senior Centers. It was also the first center in Florida to achieve national accreditation from the National Institute of Senior Centers.

The Sunshine Center now offers a nice mix of small group activities, such as arts and crafts, table tennis, and creative writing, combined with large group activities like arthritis exercise classes, tai chi, yoga, Caribbean aerobics, and many other activities. In addition to other support groups, the center recently started an LBGTQ group. The resources and activities available at the center help many older people remain a vital part of their communities. A popular center offering is field trips, including recent excursions to the Victory Ship in Tampa, many parks, the Ringling Museum in Sarasota, the Strawberry Festival, and of course, Rays baseball.

Recently, while City Hall was being remodeled, the Sunshine Center served as an alternate City Hall location. Council and many city commissions and committees held their meetings in the auditorium. For many years, the Council of Neighborhood Associations (CONA) held their monthly Town Hall Membership meetings there. CONA is still meeting by Zoom, but plans to resume in-person meetings at the center when the Covid-19 situation improves.

Sally Marvin is the current supervisor of the Sunshine Center. She has worked there for 31 years and remembers that after she interviewed with the city, she was offered two jobs: One was an administrative job; the other was working with seniors at the Sunshine Center. At the center, she interviewed with Buchert, who was affectionally known as “Mr. B.” When Buchert heard that Marvin had a young daughter who needed looking after, he told Marvin to bring her to the interview. After Marvin was hired, her daughter, Jennifer, visited the center frequently. There she acquired many “grandmothers” – seniors making use of the center’s programs and services. There was “Dollar Grandma,” who gave her a dollar; “Dresses Grandma,” who handmade dresses for her; and “Hug Grandma,” who always gave her a hug.

Marvin recalls that Buchert was a “towering presence.” In addition to shepherding the center’s opening, he initiated much of the programming, which was cutting edge for the time.  This included “Job Marts” for seniors (defined as over 40). An associated program is the AARP Foundation’s Senior Community Service Employment Program, which provides job training by nonprofits leading to good-paying employment. He instituted the “Senior Hall of Fame,” annually honoring seniors who volunteered significant service to the city. They are honored with a key to the city at a reception, and their photos are permanently displayed in the center auditorium. An intergenerational sensitivity training program was created called “Hands Across the Ages” for high school students and seniors, as well as an intergenerational choir. Another initiative, “My Favorite Older Person,” saw youngsters write essays on their favorite senior.  Under Buchert, and with the help of Sister Margaret, founder of the Free Clinic, the center also established a program on spirituality.

Marvin reflects: “Mr. B was such a great guy. He had a passion for seniors advocating that they be treated respectfully and with dignity. He personally would greet each senior he encountered at the center, addressing them by name and asking about their welfare.” Even after Buchert’s retirement, he was still actively involved in supporting the center. One of his last projects was to install a new arbor for the center’s courtyard. Buchert passed away in August of 2021.

At one time, the center offered a program called “Seniors vs. Crime.” Seniors who were victims of scams were encouraged to report them to the program. Over $1 million was recovered and returned to the victims. Other notable center services and events over the years include health fairs, and the Florida Department of Health used the center as a test site for new health technology devices. Seniors at the center also played extras in the films Cocoon – notable centenarian Charles Rainsbury played Smiley – and H.E.A.L.T.H., filmed at the Don CeSar. The center has been visited by a host of politicos over the years, including Lawton Chiles, Tom Gallagher, Bob and Adele Graham, Bill Young, Paula Hawkins, Jeanne Malchon, Hillary Clinton, and Charlie Crist.

In 1981, the Enoch D. Davis Community Service Center was established at 1111 18th Avenue South. Adult and senior programming is also currently offered at Azalea, Bay Vista, and Roberts Recreation Centers. Over the years, the Office on Aging, in addition to operating the Sunshine and Enoch Davis Centers, also took on administration of the Shuffleboard Club, the Lawn Bowling Club, and the Chess Club, all at Mirror Lake, adjacent to the center.

In her 31 years at the Sunshine Center, Marvin has seen many changes. She remembers that in the early 90s, participating senior women usually wore house dresses and engaged in passive activities, such as sewing. Most men just sat around (unless they played softball with the Kids and Kubs). Now the outlook on senior life has changed. There is major emphasis on physical activity, much of it is medically driven.

Marvin estimates that about 60% of senior participants come from the downtown area – many from senior housing such as Peterborough Apartments, Lutheran Apartments, The Princess Martha, Presbyterian Towers, John Knox Apartment, Town Center, and others. She is concerned, however, about condos and expensive apartments displacing several affordable, vintage apartment complexes in the Mirror Lake area.

The Friends of the Sunshine Center, a nonprofit corporation, helps raise funds not provided by the city to enhance center activities. The group was recently recognized by the center as “Volunteers of the Quarter.” A citation reads, “They help bring awareness to the community about the center and promote our events, programs, and activities. Their continued advocacy is a fierce support system for the Sunshine Center, one for which we thank them endlessly.” The Friends raise funds for special center activities and have purchased fitness and café equipment. The center also has a Senior Fee Waiver program funded through a trust fund that allows low-income seniors to attend fee classes and field trips at no cost.

The Sunshine Center has about 40 active volunteers, but there is a need for more to help at the reception desk, the resale shop, and the café. The center also welcomes instructors for line dancing, a book club, and Mahjong.

A popular current program is amateur dramatics. Participating seniors will hold A Murder Mystery Dinner on September 10. Tickets are $15. The center is also preparing for an auction, “Sunshine on My Mind,” on November 3, and is seeking donations of items to be auctioned off. Those interested in donating or volunteering with the Friends of the Sunshine Center may call 727-821-2323 or email sunshinecenterfriends@gmail.com.

For more information on the center and its services, visit stpeteparksrec.org/sunshinecenter or sunshinecenterfriends.org.