January 18, 2021by Will MichaelsNo CommentsAll, History 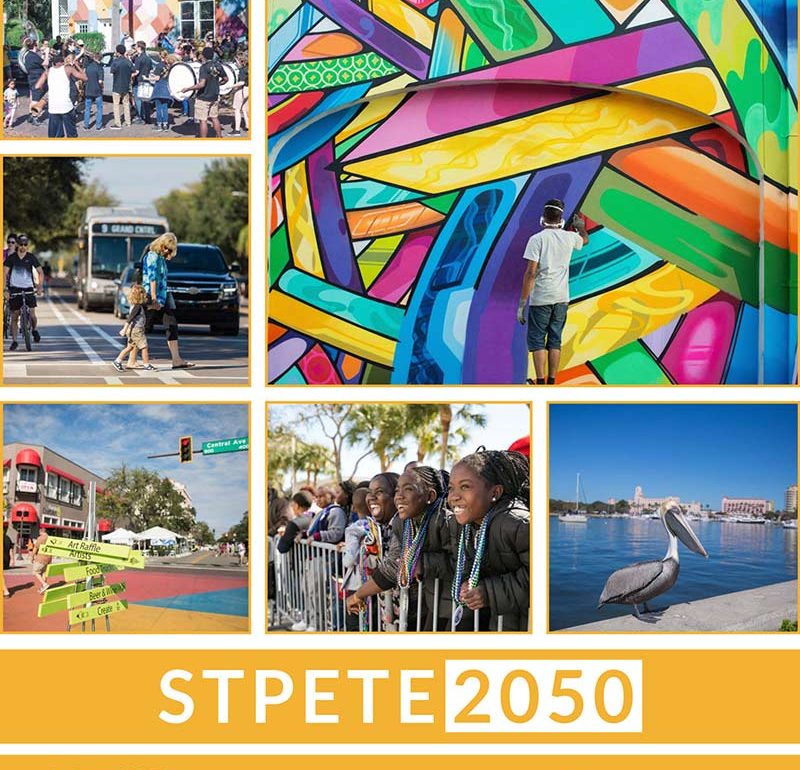 StPete2050 is a city-government-initiated visioning process to explore and create a picture of what St. Pete should look like 30 years from now. It’s an update of the 2020 visioning process that took place 20 years ago. StPete2050 will result in significant revisions to the city’s Comprehensive Plan and Land Development Regulations (LDRs). They are two of the city’s most important ordinances.


A particular challenge for Vision 2050 will be to maintain community character while managing new development. Looking forward, city administration projects that by 2050 there may be as many as 367,000 residents, a 36 percent increase in population. According to the 2050 plan, this would create an additional need for between 2.3 and 4 million-square-feet of new office space; 31,000-47,000 residential dwelling units; 1.1- 1.9 million-square-feet of retail space; and 3,300-5,600 hotel rooms. However, as the plan notes, it’s unclear how the pandemic might change these numbers, which could include diminished in-person shopping and dining with more use of home delivery services and an increased acceptance of work-from-home solutions that may change the office market. Corporations may conclude that it is far more economical to have employees work from home rather than in large office towers.

StPete2050 is organized into 10 Community Themes with each theme containing a varying number of goals. Because of space considerations, we will cover just two themes: 1) Growth and Community Character, and 2) Sustainability and Resilience.

Perhaps the boldest of these goals is to “Encourage the highest use mixes, densities, and intensities…” and “Prioritize infrastructure improvements that support population and economic growth strategies.” Smart managed growth is important. We do want a city that will provide jobs for our children. But as Peter Kageyama states in his book The Emotional Infrastructure of Places, “Though economic growth is generally a good thing, explosive growth is not without its drawbacks.”  He cites in particular skyrocketing housing prices and homogenized, monoculture neighborhoods.

“Protecting the character and viability of neighborhoods” and “Expanding housing choices within the neighborhoods, corridors, and centers” are also important goals within Growth and Community Character. But, only one of these goals speaks to historic preservation. Peter Belmont, former president of Preserve the ’Burg, questions whether there are adequately identified strategies to sustain St. Petersburg’s ‘sense of place,’ which includes historic preservation, the arts, local business, our neighborhoods and parks. Belmont recommends that 2050 Plan “include goals calling on the city to create and implement a comprehensive strategy to maintain and preserve our community’s character and to support partners working collaboratively on keeping St. Petersburg special.” Perhaps this should be prioritized, in line with “Protecting the character and viability of neighborhoods.” The 2020 Vision declared that “St. Petersburg’s greatest asset was the diversity and quality of its many neighborhoods.” The same idea remains true today. Consider that the Growth & Community Character theme of “Shared Economic Prosperity” includes the goal, “Continue to have and implement a comprehensive economic development strategy.” It seems appropriate to include a similar goal to protect and develop our community’s character.

Another theme, Sustainability and Resiliency, addresses the challenge of climate change and sea-level rise, along with more frequent and intense storms and the resultant wind damage and flooding. Florida is the most hurricane-prone state. Just a Category 1 hurricane is projected to flood 41 percent of St. Petersburg’s land area. One of the six Sustainability goals is to “implement a resiliency strategic plan that protects and adapts public infrastructure from forecasted sea-level rise and other impacts of climate change.” Another is “allow/incentivize and regulate redevelopment in the Coastal High Hazard Area [CHHA] to achieve reductions of at-risk properties and populations, and increases of resilient development structures.”

The City has recently changed its policy of prohibiting increases in residential density in the CHHA, and now permits increased density in portions of the CHHA. While building standards for such construction have been commendably increased, mandating two more feet of elevation, the strategic plan and related risk vulnerability assessment and infrastructure plan are yet to be accomplished.  The challenge is considerable. Cathy Harrelson, president of the nonprofit St. Petersburg Sustainability Council, notes, “Raising sea walls in response to sea-level rise won’t solve the problem, given the porous karst hydro-geology underneath us. Raised sea walls simply drive water from rain and storm events more quickly and further into neighborhoods (for example Shore Acres). Expanding estuarine mangrove forests and wetlands along St. Pete’s coastline will be most protective… Raising roads and underground water/sewer infrastructure is and will be very expensive for all taxpayers, long after developers who benefit from the recent density increase move on to develop higher ground.”

There is much that is positive and encouraging for St. Pete’s future in the StPete2050 Vision. But given its breadth, it remains a challenge to discern the full implications of the plan. Can the current Land Use and Zoning Maps actually accommodate a 36 percent increase in population? If not, how might boundaries and zoning categories change? In addition, including the suggested comprehensive strategy or master plan for fostering community character is fundamental.

To see the entire StPete2050 Plan go to www.StPete2050.com/index.html. Send comments to Derek Kilborn at derek.kilborn@StPete.org. Also a survey may be taken online.