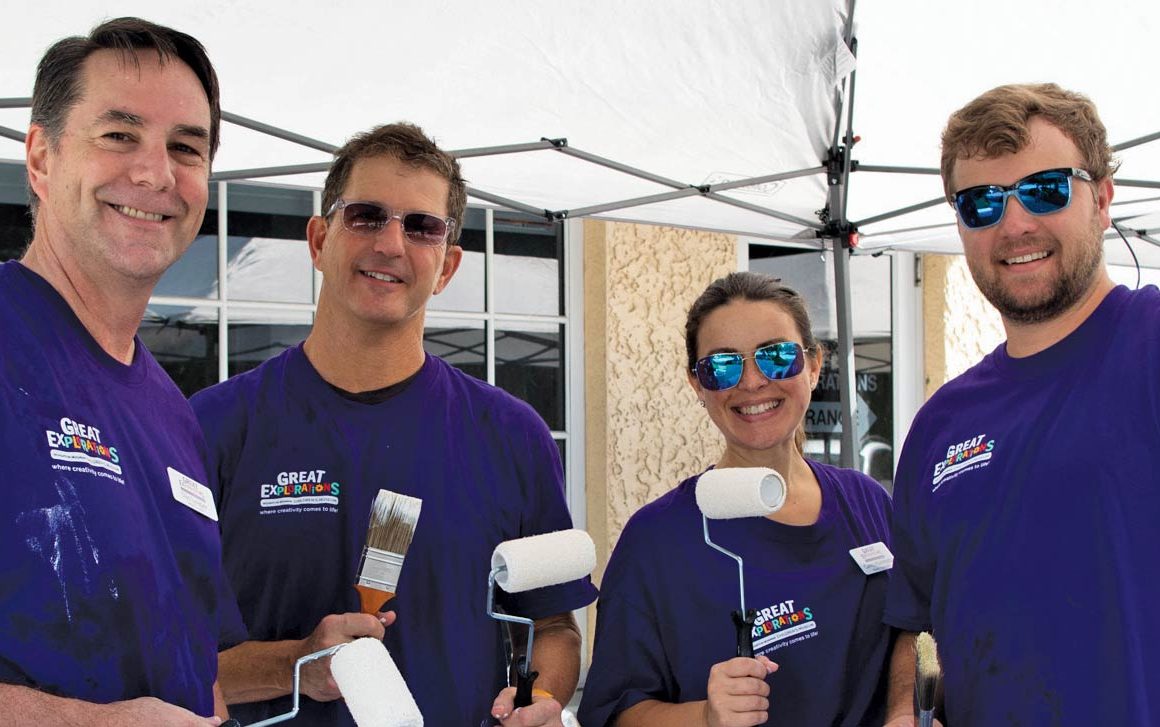 Habitat for Humanity focuses on affordable homeownership for families. Great Explorations Children’s Museum focuses on children. So it was only natural that when Habitat launched a new program creating playhouses for children, Great Explorations was the first organization to get involved.

Last fall, you might have noticed a small painting party underway in the parking lot on 4th Street North which Great Explorations shares with Sunken Gardens. Great Explorations’ staff, board members, and even some of the children from the museum’s after-school program joined in the fun to assemble and paint a playhouse under the guidance of the local Habitat team.

The finished playhouse, which is large enough to fit four children, has an arched doorway that opens and closes, windows on the side, and an actual roof to protect against the elements. It’s painted in bright Great Explorations’ colors – purple, blue, red, and green. At the request of kids participating in the painting project, the playhouse has a sign that reads “Kids Only.” 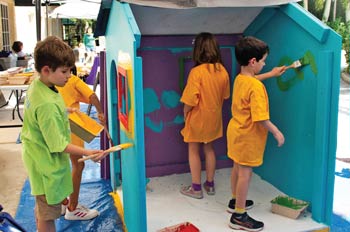 Kids add a creative touch to the playhouse.

Mandy Paige, public relations director for Great Explorations, notes that this was the first time the museum has partnered with Habitat and the project was a great success. “We were all covered in paint, but we learned new skills. Our staff is talking about doing it again,” says Paige. “Habitat is such a fantastic organization, doing amazing things. It’s not often that nonprofits find that kind of synchronicity where you can work together side-by-side so easily.”

Alison Riley, vice president of corporate partnerships and marketing for Habitat for Humanity of Pinellas County, agreed that the build was seamless. “It was such a great experience to watch a team of people smiling and laughing together as they created something for children that will likely change their world.” She notes Habitat’s program traditionally focuses on homeownership for the parents and not generally on the children. “The Playhouse Program gives us the chance to provide children a playful retreat that they get to call their own, while helping to support our overall mission of affordable housing,” says Riley.

When Riley first joined the Pinellas Habitat team in 2017, she had a goal of introducing more local businesses to the organization’s mission. She also wanted to implement the playhouse program, which had originated in the East Bay/Silicon Valley Habitat office in California. “Just as important, I wanted to find a special way that we could partner with the children served by Habitat, who often work side-by-side with their parents to help earn their family a chance at homeownership.” 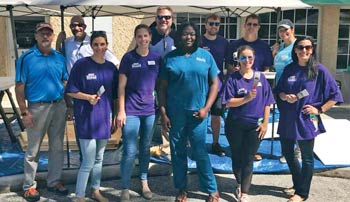 The team poses for a photo.

It was through connections made during the Leadership St. Pete Class of 2018 that the local  playhouse program was born. As  a member of that class, Riley met Darryl Feldman of Great Explorations, and Lisa Suprenand of Ronald McDonald House Charities. As luck would have it, Suprenand happened to send Riley an article about a playhouse  being built in Austin, TX and the seed was planted. Riley contacted Feldman, discussed it over coffee, and says, “That meeting at Panera blossomed into an amazing idea that we are looking to spread through the business community.”

According to Riley, the playhouse program is designed to be a corporate team-building opportunity. The Habitat of Pinellas website notes that teams contribute a tax-deductible donation of $2,500 per playhouse to cover the cost of materials and support our work in the community. Habitat Pinellas provides all the materials, tools, training, and supervision needed for a great experience. 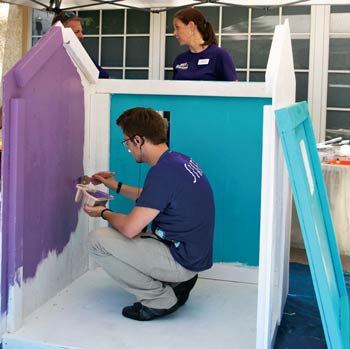 It’s the ideal corporate community involvement. Instead of companies having to commit to a long-term project, the playhouse is tailored to be completed in about a half a day. The playhouse pieces are pre-cut, ready-to-prime/paint/assemble, and delivered to the sponsor organization site. Four hours later, with the guidance of Habitat’s talented team, a playhouse is constructed. While each of the playhouses is designed similarly in layout, paint colors selected by the participating organization help make each one more unique and personal.

“Participating in the playhouse project gave us the chance to provide these children a playful retreat that they get to call their own, while helping to support our overall mission of affordable housing,” says Paige. “Not only did we build playhouses that day, we also built a lot of good will. As a museum, we are trying to expand our reach into the community. We wanted to show our commitment to the community beyond our four walls.”

A Vision For The Future

Riley hopes that Habitat will be able to fund and complete 10 more playhouse-building programs. She says that in the long run, she hopes “we can fully fund a home sponsorship through the Playhouse program which would amount to $50,000.” 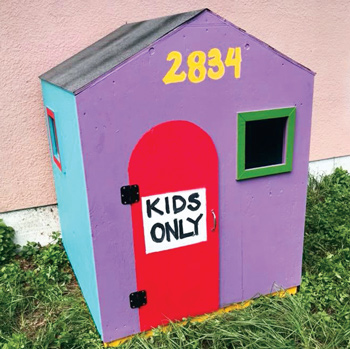 Her vision for the future? “My hope is that Habitat Pinellas can be an advocate for this innovative means of fundraising, and help others to focus on the children of the Habitat Program. These individuals are the leaders of the future, and we need to make sure we support them and allow opportunities to grow their imagination and creativity.”

Riley adds that Habitat is working toward creating a world where everyone has a decent, affordable place to live. “Children are the first to benefit from living in a stable, secure home,” she says. “They are healthier, have fewer behavioral problems, and perform better in school.”

Our city is fortunate to have these two wonderful organizations working side-by-side to help nurture our children and guide them to a brighter future.