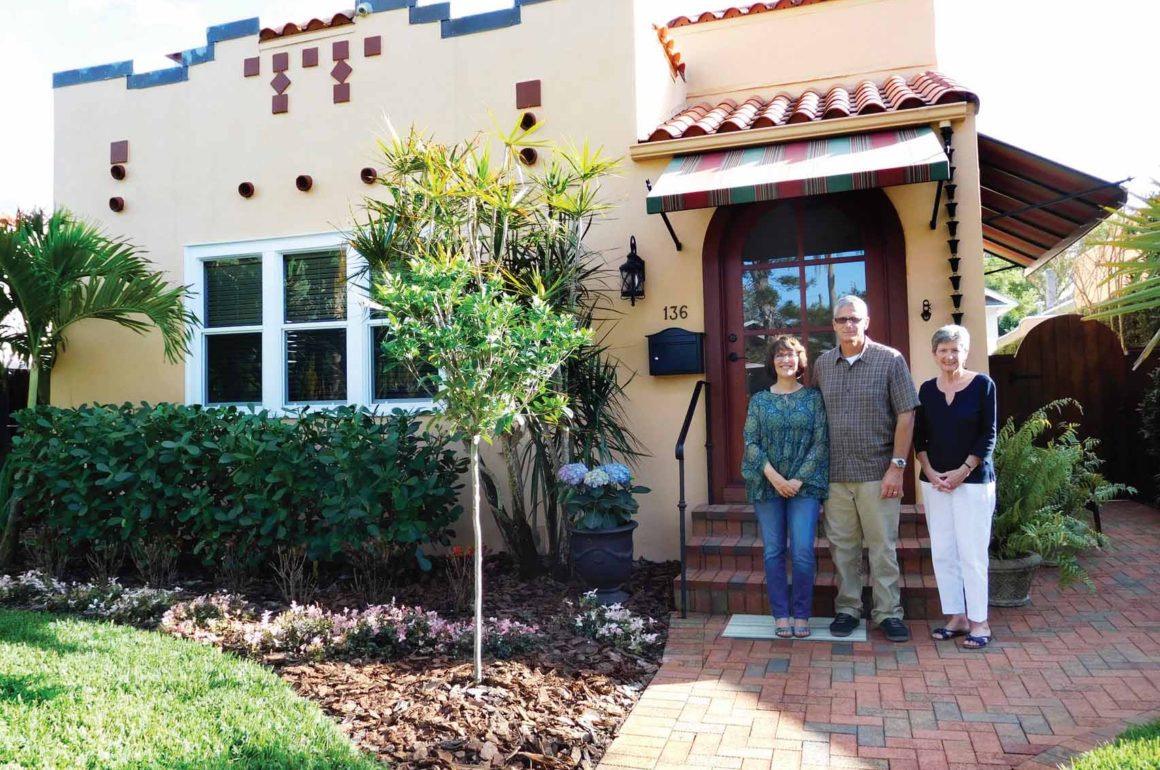 Cities rich in history have a patchwork of buildings, old and new, historic and modern architectures, side by side. How do cities like Rome or Paris become treasures of the world today? Time. Quality. Care.

Organizations like St. Petersburg Preservation – recently rebranded as Preserve the ’Burg – are doing just that: serving as champions for making sure future generations can enjoy the ’Burg’s interesting and eclectic heritage.

It was a beautiful evening at Nova 535, an historic event space on 9th Avenue North, as Preserve the ’Burg celebrated its 40th anniversary this past January with a party and panel discussion featuring local experts talking about the organization’s accomplishments, as well as the direction for the future.

While initially Preserve the ’Burg counted just a handful of preservation activists, today the organization has over 1,000 members. “We are lucky to have a group that educates people to the city, curates and looks out for the city, and finds those jewels that are all around us,” Mayor Rick Kriseman said in his opening remarks at the 40th anniversary celebration.

One of the earliest examples of public support for saving the city’s historic buildings took place in 1977, when a few citizens picketed against the demolition of the 1913 American Bank and Trust Company. Unfortunately, only two columns were saved. They’re now a part of the Veterans Memorial in Williams Park. But, the event ushered in a new era of interest in preservation.

Two years later, Francis McSwain Pruitt successfully launched a dramatic effort to save the historic 1901 Veillard House. Henry Dupont – of Don Cesar Hotel fame – designed this unique masonry bungalow and Queen Anne style structure. Pruitt purchased the home and moved it two blocks down to its present location at the corner of 3rd Street N and 4th Avenue N, where it still stands today. The home was listed on the National Register of Historic Places in 1982.

It’s interesting to note that Ralph Veillard – the original owner of the Veillard House, and a member of City Council in 1908 – wrote the resolution of city’s intention to purchase the entire downtown waterfront, preventing its development by private investors, and thereby preserving it for all the public to enjoy. “If we didn’t have the waterfront parkland, we wouldn’t be what we are today,” says Natalie Pruitt Judge, one of the panelists at the 40th anniversary celebration and the daughter of Francis McSwain Pruitt.

Preserving the city’s history is vital, said Judge. “It’s so important that we know what our identity is,” she says. “This sense of place – it’s an identity that people can see when they come here. It’s comfortable because it’s authentic.”

“We are excited that the homeowners in these neighborhoods have come together to seek local historic district designation,” says Elwyn. “It provides them with a tool to help maintain the character that makes living in their respective neighborhood special.”

Still pending is a section of 10 homes on the south of 19th Avenue NE between Bay and First Streets. Designated as Welch’s Mediterranean Row, the homes were designed by C. Sedgwick Moss and constructed in 1924 and 1925 by contractor M.B. Welch. Guy Keirn and Dr. Susie Wehr feel fortunate to live in one of the distinctive homes in Welch’s Mediterranean Row. “Nowhere else in the US are there 10 Mediterranean Row homes in a single block like this. We feel that we are the stewards for these houses,” says Keirn.

Dr. Susie Wehr and Guy Keirn stand in front of their Welch’s Mediterranean Row home with Robin Reed, board
member of Preserve the ’Burg

The couple originally lived in Treasure Island, and then for a short time in a condo on Snell Isle, before buying their Old Northeast gem a year-and-a-half ago. “We looked at these houses for probably 10 years,” says Keirn. “Susie told me, ‘If one ever comes on the market, we’re going to buy it.’” One day they drove by and saw a for-sale sign in the yard. “We hit the brakes,” jokes Keirn. “We sold the condo and bought the house.”

Over the years, Preserve the ’Burg has counted both success stories and lost opportunities to save historic buildings from demolition. As panelist Dr. Ray Arsenault, a professor at the University of South Florida St. Petersburg, pointed out, one of the biggest losses was the 1924 Soreno Hotel, St. Pete’s first ‘million-dollar’ hotel. In the late 1980s, when downtown was struggling, the hotel was demolished as part of a scene in the movie Lethal Weapon 3. “That episode changed everything for us. It was a David and Goliath moment,” says Dr. Arsenault. The Soreno became a rallying cry for preservation.

Panelist Keisha Bell – an attorney and member of the city’s Community Preservation and Planning Commission – talked about Preserve the ’Burg’s successful efforts to save Mercy Hospital, the only hospital open to African Americans during St. Petersburg’s era of segregation. Keisha recalled a conversation with her grandmother where she learned that her mother had actually been born at the hospital, now a local landmark in the city’s Midtown district. “People have emotional ties to buildings,” says Bell. “If they’re demolished, then history’s been lost. Once we lose history, we lose our people.”

Tim Clemmons, principal of Mesh Architecture, highlighted Preserve the ’Burg’s efforts to create a Downtown St. Petersburg Historic District, which was approved in 2004. “We may be only 110 years old, but the city has a rich collection of historic buildings downtown,” says Clemmons. He shared some of the interesting comments the group received during the application process when reviewers noted the eclectic nature of downtown buildings dating from the 1880s through the 1950s; and the city’s history as a recreation, leisure, and tourist town, with the Shuffleboard Court, Lawn Bowling, and Chess Clubs as prime examples from that era.

Sharon Winters moved to the Old Northeast from Tacoma, WA, two-and-a half years ago and was among local residents attending the event. She and her husband love the character of the city, the historic buildings, the waterfront, and walkable neighborhood. “We find there is community wherever you go, but there is a real unique sense of place here,” says Winters. Her favorite building is the open-air post office, which she describes as ‘quintessential Florida.’ Her husband was sold on the city’s bike co-op program and overall lifestyle and culture.

A librarian by training, Winters is accustomed to meticulous detail and research, and not a stranger to preservation since she founded the preservation society in Tacoma. She says HONNA – the Historic Old Northeast Neighborhood Association – does “a great job to support and celebrate the community, working with people who want to preserve their older homes.”

As Mayor Kriseman stated during his remarks, “I feel very fortunate to live in a city where people care so much. When I travel around and talk to other mayors from other cities, I get to brag about us and organizations like this. Thank you to Preserve the ’Burg for all your hard work, and for making the sun shine so brightly here in St. Pete.”