Reinvention at the Museum of History 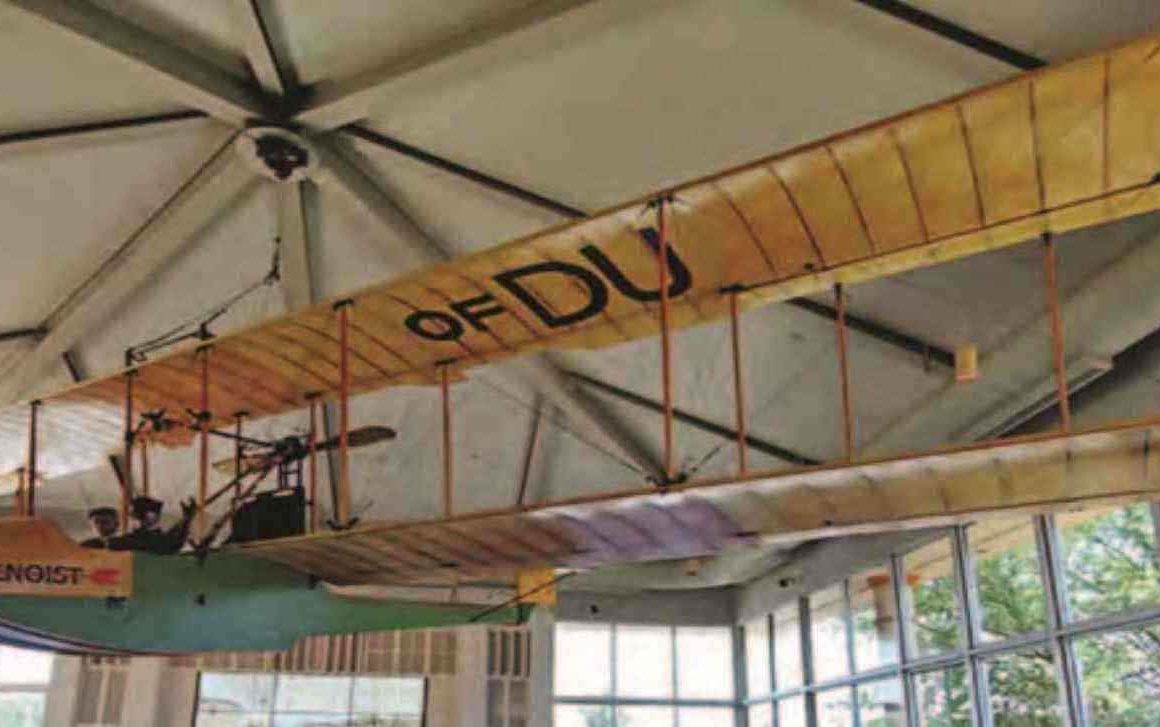 The St. Petersburg Museum of History is about ready to again reinvent itself. I had the honor of once serving as the museum’s executive director and as a trustee on its board. I thoroughly enjoyed my time there. The museum gave me to an opportunity to apply my education in anthropology, and it was while there that I began writing the history column for the Northeast Journal back in 2004.

At the time I was with the museum it was also undergoing a major renovation. A new entrance and gift shop were fashioned off 2nd Avenue NE. The Strum Family Gallery was created, now where Schrader’s Little Cooperstown renowned Signed Baseball Exhibit and Collection is displayed, and the administrative offices were moved from the front of the museum to a new wing on the back of the museum. The Hops and Props Dart Room is where my office used to be. The main gallery was renovated and a new signature exhibit on the History of St. Petersburg was put in place, new storage space and a conference room were created, and the museum’s treasured archive of photos and other ephemera was given a new second-story home, better protecting it from possible flooding.

The museum dates back to the 1920s, and as such it is the oldest museum in both St. Petersburg and Pinellas County, and the third-oldest history museum in Florida. In 1920, Mary Wheeler Eaton and a few other community leaders founded the St. Petersburg Historical Society. A year later, St. Petersburg weathered its last direct-hit hurricane which flooded a privately operated aquarium on the downtown waterfront. The Historical Society bought the damaged aquarium and this became the home of what is now called the St. Petersburg Museum of History. The land upon which the museum operates is owned by the City and leased to the museum.

Museum executive director Rui Farias recalls that the museum was contemplating an expansion that would happen a few years from now, but about a year-and-a-half ago, after talking with Skanska the Pier construction company, and the City of St. Petersburg, it was decided now was the time to begin! The area around the museum was being torn up anyway because of the new St. Pete Pier construction. By starting an expansion now, tearing up the newly built Pier facilities could be avoided later on. Additionally, by substantially completing construction by the time the new Pier opened, the museum would be in a position to capture the estimated 1.7 million visitors projected to visit the Pier in its first year.

The renovation and expansion will be in three phases. The first phase has already been accomplished. This involved the installation of fire sprinklers in the museum for the first time. Also, the prior St. Petersburg Signature Exhibit gallery has been renovated. The carpeting that was put down in the 2004 renovation was removed and the original 1950s-era terrazzo flooring uncovered and brought back to life. Wooden stairways have been replaced with cement so they no longer vibrate as you step on them. This gallery will now be used primarily for temporary exhibits. Recent such exhibits have included Fighting for the Right to Fight: African American Experience in WWII, La Florida – The Spanish Exploration, and Odyssey Treasures of the Deep. 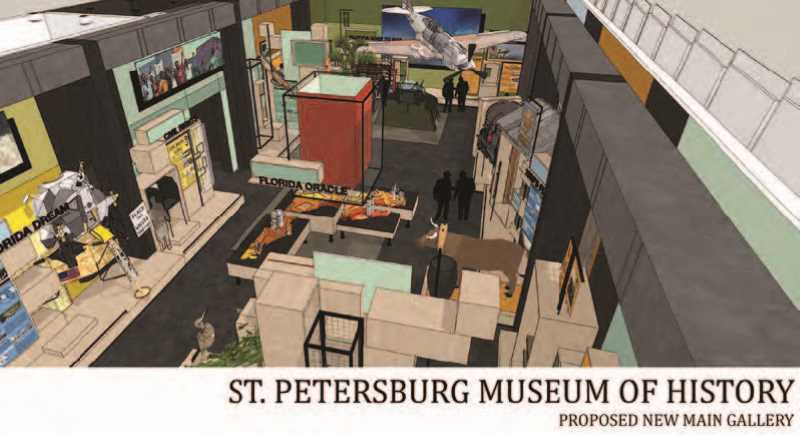 The second phase is scheduled for this October and calls for a new 8,000-square foot two-story wing to be attached to the east side of the museum. The first floor will serve as a new visitor’s center providing information regarding not just St. Petersburg, but all of Pinellas County. This will include an information desk, gift shop, and a ‘live gift area.’ The live gifts or art will feature such attractions as artists at-work painting wall murals, and other artists and storytellers such as a sponge diver from Tarpon Springs explaining the skill of diving and demonstrating vintage diving equipment. There will be kiosks for other cultural venues such as the Dr. Carter G. Woodson Museum and the Florida Holocaust Museum, as well as historic Tarpon Springs, Dunedin, and Heritage Village. 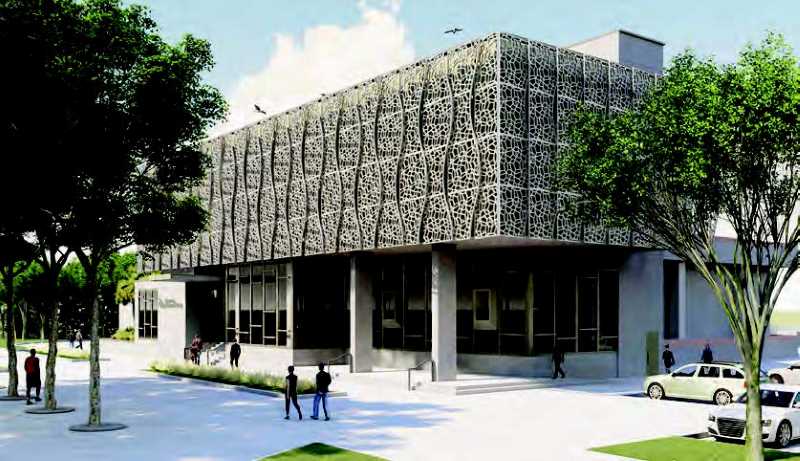 Architect renderings of the East Perspective

The Visitor Center will also serve as the ticket location and starting point for walking, bicycle, Segway, and trolley tours. And there will be a state-of-the-art conference room available to community groups. The entrance to the addition will be off the south sidewalk alongside the Pier Market Place. The second floor will house a completely new Signature Exhibit focusing on St. Petersburg, Pinellas County, and Florida, displaying artifacts and interactive features, one of which is a huge Florida map. As you put your hand over the map, information and visuals about that part of Florida will suddenly come to life. And yes, for those of you who grew up in St. Pete and took school field trips to the museum, the mummy and two-headed calf will continue to be on display.

A final touch on the addition will be a roof-top terrace looking out over the entirety of the Pier District and adjacent yacht basins. This will be dedicated to rentals for weddings, anniversaries, and other special occasions. A metal skirt – popularly known as a ‘cheese grater’ – will decorate the exterior of the addition. The current images are conceptual only and the exact form is yet to be determined. One idea is for this to take on the appearance of the city’s 1920s skyline. 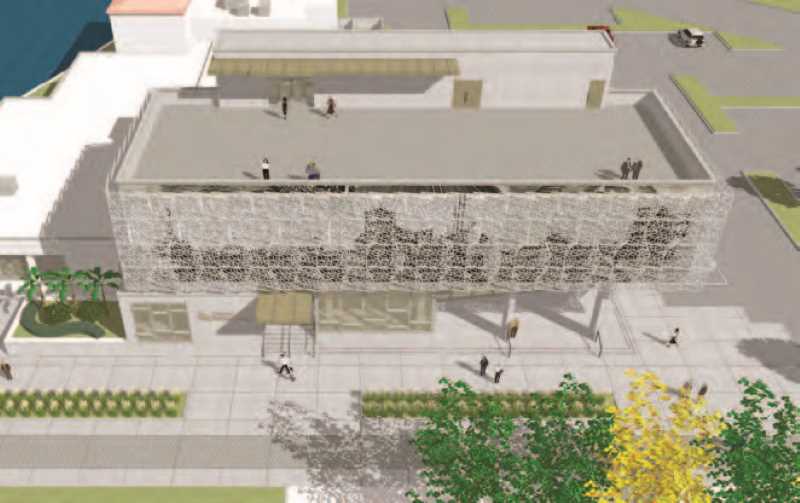 My wife, Kathy, and I celebrated our 50th anniversary a few years back in the gallery dedicated to the story of the World’s First Airline.  Maybe we can celebrate our 55th on the rooftop. The Flight Gallery will also be upgraded to include a new aviation history timeline and flight simulator. It will complement the new monument to the World’s First Airline to be located just to the south of the museum. Importantly, the Museum will continue as a Florida History Teaching Facility for teachers and students through partnerships with the University of South Florida, the Florida Studies Program, Florida Humanities Council, Eckerd College, St. Pete College, and Pinellas County Schools. 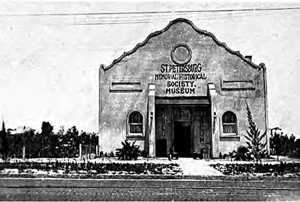 The original museum building was an aquarium. The History Museum has
been at its present site on the approach to the Pier since 1922.

Overall cost of the renovations and addition will be approximately $7.2 million. The City of St. Petersburg has committed to $1 million, half of which has already been allocated. Various grant requests are pending. Private donations are also being sought. Interested parties should contact Rui Farias at the museum (727-823-7276).

“We have the opportunity to create a premier museum that not only shares the history of the Sunshine City, but also the unique history of the entire state right here in St. Petersburg,” says Farias. “Our goal is to create a visitor experience that will educate, entertain, and leave our guests wanting to come back for more.” Upon the cusp of the museum’s centennial, it’s wonderful to see the museum grow and evolve, continuing to reinvent itself in so many ways.

« Previous post
Paper Reimagined at the Museum of Fine Arts
Next post »
St. Pete Bees Create Quite a Buzz