There are certain tragic occasions in our country’s history that will forever linger in our collective memory. The bombing of Pearl Harbor. John F. Kennedy’s assassination. Hurricane Katrina’s destruction in New Orleans. And 9/11.

Placido Bayou resident Jo Brower is making it her life’s mission to keep the memory of 9/11 alive by honoring and supporting our military, veterans, first responders, and their families. Over the past six years, her nonprofit organization RHS (Remember, Honor, Support, Inc.) has raised more than $500,000 for this worthy cause. 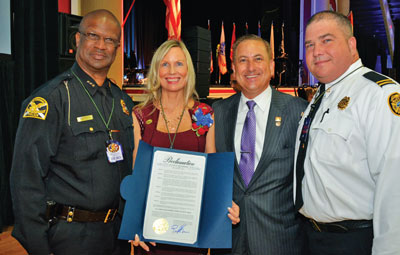 “It’s about remembering the price of freedom, honoring the sacrifices made by our men and women, and taking care of our own local heroes,” says Jo. “We’re also keeping the memory of 9/11 alive and educating our youth, many of whom were very young when it happened and aren’t aware of its significance to our country.”

The idea for RHS came after Jo and her late fiancée, John Stross, co-owner of Leverock’s Seafood, helped a friend and group of women organize a 10th anniversary 9/11 prayer breakfast. That was in 2011. “John and I were so touched with the event that afterward, we looked at each and said, ‘let’s do this and kick it up a notch,’” Jo recalls.

The two formed a nonprofit organization, added a board of directors, and an advisory board of first responders, military, and community leaders. They also began planning fundraising events. The inaugural RHS-sponsored Patriot Day Memorial Breakfast was held in 2012 at the Vinoy and raised $70,000, a significant start for a fledging organization. Each year since has brought a bigger crowd of attendees and notable guest speakers. This year’s event – held on Tuesday, September 11 at the Coliseum – was one of the largest so far. The guest speaker was retired Master Sergeant Scott Neil, a Special Forces veteran whose story of going into Afghanistan after 9/11 was retold in the movie 12 Strong and the documentary Legion of Brothers. Neil is also a local St. Pete resident and co-founder of St. Pete’s new American Freedom Distillery with three fellow Green Berets. 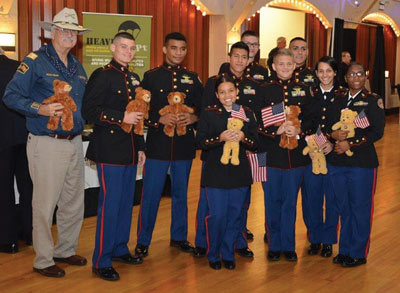 “Six years ago, when we started RHS, we were pioneers in bringing the community together to honor our first responders and our military. John and I did not know where we would go with it and here we are today ,” says Jo. “What we do is more than a fundraising event, it’s also a memorial and a way to highlight different military and first-responder organizations in our community. We do it for all the right reasons. After losing my only son, Barry, I have found our mission rewarding and purposeful. I love my country; I am a true patriot with purpose and passion.”

John passed away in 2014 following a battle with leukemia, but Jo says she is more committed than ever to continue his legacy and support for philanthropy. Last year, RHS launched the Ride 4 RHS Heroes, a new bi-annual fundraising event held on Memorial Day and Veterans Day in which participants ride the Pinellas Trail to raise funds. Jo is also working on getting a nationally recognized First Responder Appreciation Week from September 11-17.

“It’s been hard work but very meaningful,” says Jo. “Our amazing warriors and their families were there for us and we must be there for them.”