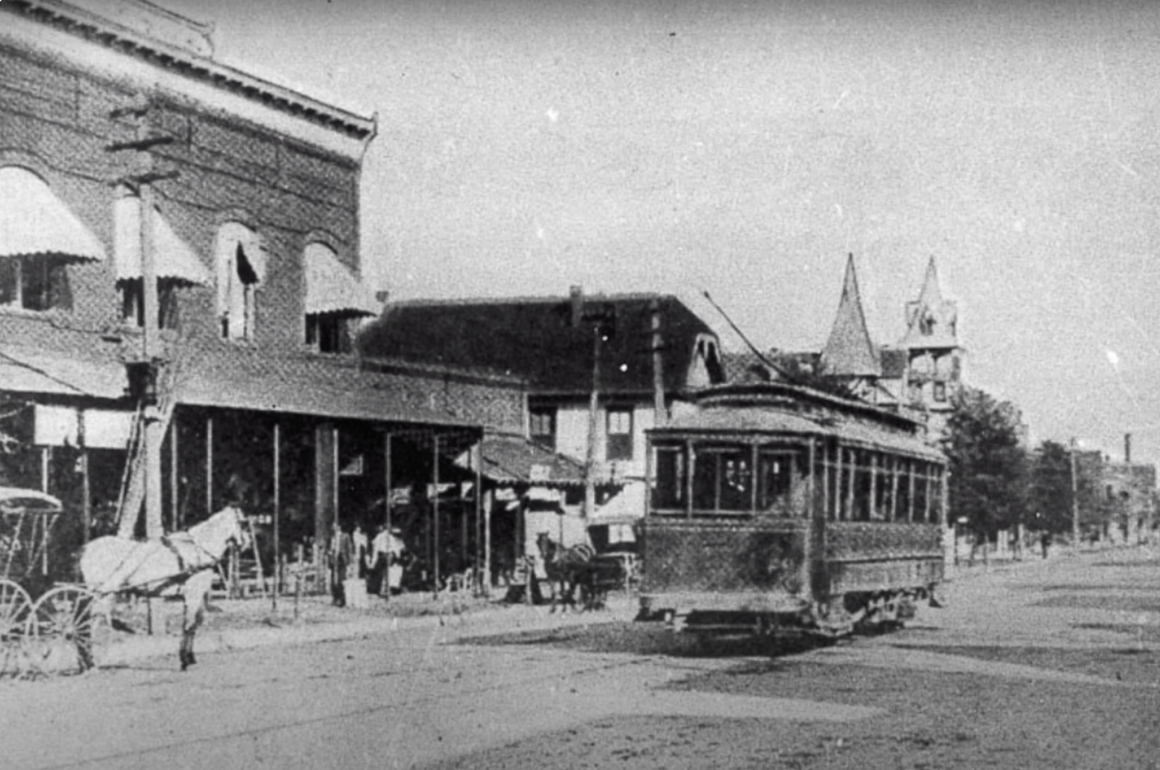 As my husband and daughter ride their bikes to the closest SunRunner stop every Tuesday evening (read more here), I find myself lamenting the loss of St. Petersburg’s streetcar system, a line of which once ran from Coffee Pot Bayou to downtown, along Locust Street, passing our house on 17th Ave NE. I frequently come across references to the trolley, or streetcar line (terms used interchangeably here in St. Pete and elsewhere), when I’m researching historic homes in newspaper archives. Proximity to the line was a popular selling point for houses, and phrases like, “three blocks from car line” abound in old real estate advertisements. (In a wonderful example of how life comes full-circle, current real estate ads similarly mention their proximity to the SunRunner line!)

St. Pete’s streetcar system was born in 1901 as the St. Petersburg and Gulf Railway Company, the brainchild of early St. Pete businessman F.A. Davis. A successful publisher of medical journals in Philadelphia, and a risk taker by nature, Davis moved to St. Pete in 1897 and founded the city’s first electric company, followed later by the famous “electric pier,” a precursor to today’s municipal pier (read more on the history of the pier from Will Michael’s here). Proposing a trolley line in a city of fewer than 2,000 people seemed foolish, but the first line opened on New Year’s Day, 1905. The original line ran along Central Avenue, turned south at 9th Street, and continued down to 11th Avenue South. Later that same year, the route was extended to Tangerine Avenue (today’s 18th Avenue South), before heading out to Gulfport, then known as Veteran’s City. By 1913 a line ran straight down Central Avenue to Boca Ciega Bay, which real estate developers happily used as transportation for the droves of tourists interested in buying property in the Sunshine City.

Both the Tangerine Line and the Jungle Line became tourist excursions in their own right, traveling through the exotic, dense Florida foliage where passengers could pick oranges directly off the trees. Fishermen were known to string their catch on the front of the trolley on the way back to town to show off the day’s catch, adding to St. Petersburg’s image as a city of leisure.

By 1915 a line ran north along 9th Street to 34th Avenue North, as well as through the North Shore development (today’s Old Northeast) to Coffee Pot Bayou. Despite the demand for the streetcar line, it went bankrupt in 1919 prompting the city to take it over as a municipal service in 1920. Throughout the next decade the line was popular enough that some trolleys were standing-room-only during peak hours, but the Great Depression and the increasing affordability of personal cars and gas-powered buses caused a decrease in ridership in the 1930s.

The line enjoyed a surge in use during World War II, when the city was full of military trainees and the rationing of gas and rubber impacted the availability of buses. Over 100 trolley operators were employed by the municipal streetcar line during WWII, including 14 women, but the future of the line was bleak. Post-war, as new neighborhoods were designed around automobiles, the city noted a steep decline in trolley use. In 1947, the city council voted to phase out the streetcars; within six months, most had been taken out of circulation. The final trolley ran through St. Petersburg’s streets on May 7, 1949. Its windows were draped in black crepe, and it bore a sign that teased “Not Dead, Just Retired.”

Will those streetcars ever come out of retirement? Not likely. The infrastructure for the streetcar lines has long since been removed. But the 21st century versions – bus rapid transit and light rail – offer tantalizing visions of a future where residents (including my husband and dancing daughter) can board public transit within just a few blocks of their house.