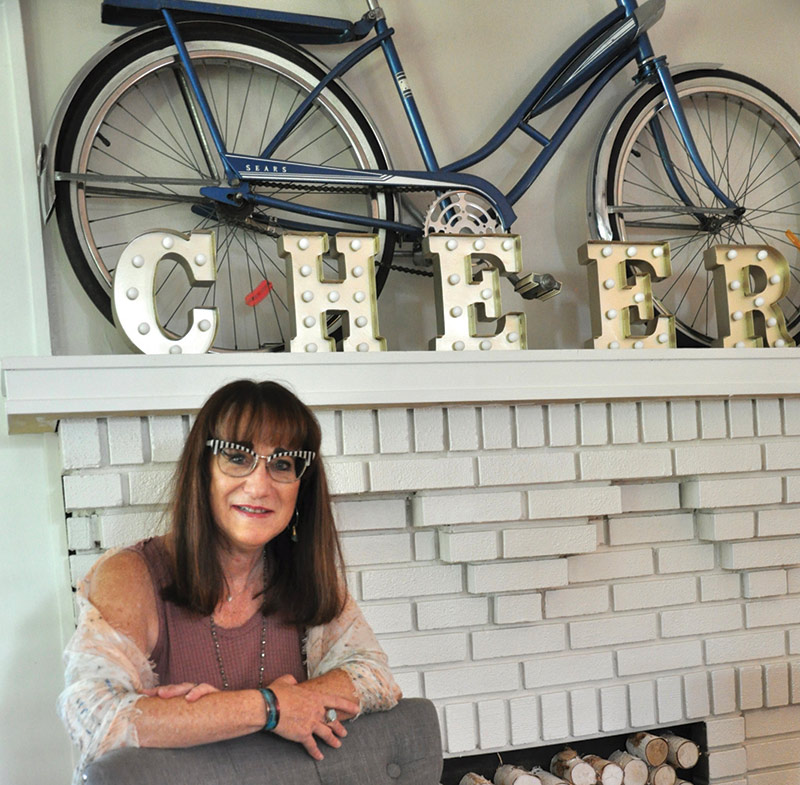 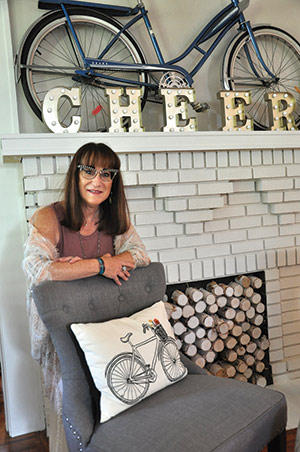 Robin Roth-Murphy highlights her living room mantel with her favorite found object: a bicycle from the 1950s.

Elton John has one of the ‘Heeling Soles’ artistic shoes created by Robin Roth-Murphy in his Woodside Estate in England! Now that is quite a story, just one of many, about Robin and her specialized art that is created from found objects (mementos, keepsakes, souvenirs, relics, or “stuff” as Robin puts it). Old Northeast residents may know her better as The Alley Recycle Artist or The Little Free Library Lady. Whatever she is called or does, it just provides more stories to tell.

This spring, Robin, a mixed-media artist, decided to decorate part of her alley wall with recyclables: plastic bottle caps! She needed a lot of them in order to finish the project – a mural really – in a reasonable amount of time. So she posted a sign on the fence above a bucket saying, “Please leave plastic lids here.” She also posted a request for more caps on the Nextdoor neighborhood online network.

Word got around. “I was expecting this project to last many months, gluing lids to the fence, a little at a time,” explained Robin, “but it only took two months! That’s a lot of lids! Now, the mural on the fence is really an eye-catching, smile-inducing, rainbow of colors that generated a lot of fans. Thus…the ‘Alley Recycle Artist.’ 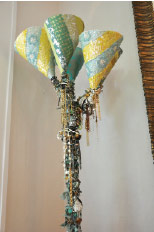 Robin used grandmother’s old dress fabric to cover the shade of a standing lamp from Target. And she used tons of costume jewelry to adorn the entire column, a perfect example of Robin’s unexpected ideas for design.

Now, let’s talk about Robin’s Little Free Library box, designed as only Robin would do, covered with relics. Robin embellished an old cabinet and collaged copies of books on it, adding playful figures on top. (They are actually her children’s discarded Happy Meals figures from the ’80s.) It is situated in plain view in the front yard with a ‘reading’ bench nearby. It is well known throughout the neighborhood, even attracting a visiting Japanese exchange student and her host family recently.

“It’s a great way to interact with the neighborhood,” reflects Robin, adding, “People take photos of it, moms with kids come by to check the books, and teens sit on the bench. It gives me a lot of joy.”

So, how does Robin’s idea of Heeling Soles artwork connect to Sir Elton John? Robin was one of a few select artists commissioned to modify recycled shoes as art pieces to decorate windows for Stuart Weitzman, Inc., a high-end footwear retailer in New York City. She used her ‘Girls-at-Play’ style to create one-of-a kind display pieces. The shoes were also part of a traveling display at Weitzman retail operations nationwide.

The recycled, reconstructed single pumps are wildly creative, decorative, and high-style, embellished with vivid silk, tapestry, glass beads, and vintage buttons and gems. According to Robin, each shoe, as it is created, takes on a personality of its own. Sounds like Elton John style for sure! 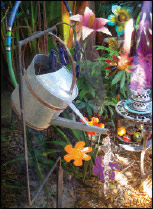 In Robin’s ‘magical garden,’a metal watering can hangs from a wrought iron stand, with clear crystal ‘water’” drops spilling out – a perfect art sculpture and a perfect view from the repurposed dining room table, below.

At the time, Robin lived in the Buckhead section of Atlanta. She knew from a friend that Elton John had a penthouse in a neighboring high rise. Everyone said that one of the shoes in her collection was in the style of Elton John. So, on a whim, she put that shoe in one of her vintage hatboxes and delivered it to his building. The next day she received a handwritten note from him thanking her and saying he was sending it to England and “putting it in his Oxford Collection.” Oh my!

But, he was not the only celebrity to receive one of Robin’s creations. Joe Biden was gifted one of her dolls when he became a major donor for a Louisville, KY charity. The Mary Byron Foundation supports innovative programs against domestic violence. Robin was commissioned to create dolls for them and she chose to stitch the MBF logo on their faces. It’s significant perhaps to mention that the dolls are anywhere from 20 inches to life-size. One wonders which one Mr. Biden has. (Not a life-size one, Robin assures us.)

Yes, Robin is well known for her Girls at Play Timekeeper dolls and Frazzle Dazzle dolls. She doesn’t plan the look of each doll, but allows her intuition free reign. Bits and pieces of wood, often vintage, are cut to size, and exposed areas are painted, stained, or wrapped in fiber, according to Robin. The creation of each doll involves machine- and hand-stitching, woodworking, and painting. Both kinds of dolls are made from vintage fabrics, trims, and recycled materials. 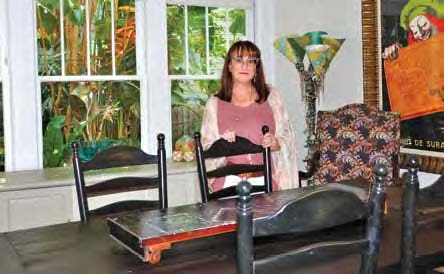 A leaf from Robin’s childhood dining room table (painted years ago in Robin’s funky design) has been repurposed yet again – with help by ONE resident David Calvin – into a rolling tray and is now an oblong ‘Lazy Susan.’ Robin’s Whimsical Garden can be viewed out the dining room window.

Her house itself is Robin’s studio. Every step through each room becomes slower and slower as one gazes at unique objects d’art on a wall, the floor, or in a corner. The bicycle standing on the living room mantel makes quite a statement. That’s because Robin loves its story of devotion. Robin found it recently at an antique store in St. Petersburg. This Sears bike was ridden for years by its original owner, a woman in her 70s who grew up in St. Petersburg.

The magical view out the dining room window embodies how Robin places art in all of her world. Known as Robin’s Whimsical Garden, found objects and relics, metal flowers, and small iron tables – all become really magical when lit up at night. This is a perfect garden – no weeding, no fertilizer, no watering.

When talking to Robin, one finds her very open and highly descriptive, so telling her story is easy. How did a girl from Louisville who loved living in Atlanta end up here in St. Petersburg? 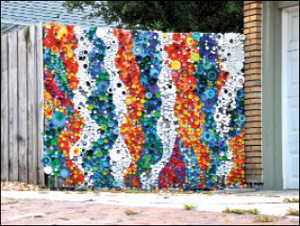 Robin’s husband, Mike, accepted the headmaster position at Shorecrest Preparatory School 11 years ago. They moved to the Old Northeast from Atlanta, where he was headmaster at Pace Academy in Buckhead. According to Robin, “When he [Mike] shared with me he was ready to search for a new school, I told him I supported his decision 100% (even though I loved Atlanta and never wanted to live anywhere else).”

Robin adds, “The only thing I said about moving was I will move anywhere but Florida. Yep, that’s right! I hate the heat, which is why I said that. So before Mike accepted the position of headmaster, I told him the only way I would move there is that I would have to have a swimming pool – and I do. Shorecrest turned out to be the best fit for Mike, and so here we are! The rest is history.”

“Mike loved it here instantly,” she continues, “I can say now I love St. Pete (still not loving the heat though). I have incredible friendships and I love the feeling of community with the local shops, art scene, and people in general.  After getting used to the laid-back mentality of St. Pete, I started enjoying this area more and more. I love Old Northeast, and the opportunity to have downtown at our fingertips.”

Atlanta was the meeting place for Robin and Mike. They were both married before and between them have three boys. Robin and Mike love to tell the story of that auspicious meeting.

According to Robin, they both had blind dates at an upscale restaurant and had arrived early. As they waited, Mike walked up to Robin to talk. She could tell he was nervous as he asked her for a future date. “I gave him the once over, noting his plain blue suit, and told him he was too conservative for me. He responded with, ‘Are you always this judgmental?’” Before they parted for their blind dates, he gave Robin his card. She did call him of course, and they celebrated their 19th wedding anniversary in July! 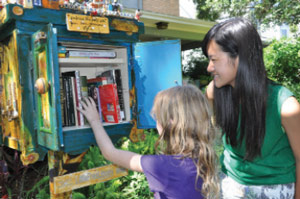 But, what about Robin the artist, what is her story? “My intention 11 years ago was to continue creating as a business once I got situated in Florida, but I never could get myself motivated until recently. The timing is right to reinvent myself as a mixed-media artist.” After a hiatus, she has evolved into sculptured mixed media; jointed dolls are gone and sculptures now have more grown-up faces. She has pursued other careers, but always comes back to art. “Creating with my hands makes me feel most alive. I lose myself in my artwork and I derive great pleasure in sharing it with others,” she declares. After studying at the Louisville School of Art and the Atlanta School of Art, she exhibited in a myriad of juried American Craft Council shows. Her work has appeared on the cover of several publications and she has contributed to many charitable causes.

“It was my mother’s homespun artistry displayed in our house on the walls and cupboards that inspired me to pursue a career as an artist,” recalls Robin. But, it was her grandfather’s influence on her that was most profound. It “both haunted and enchanted me,” she says. Her grandfather, Nahum Tschacbasov, was a world-renowned Russian-born, Paris-educated artist whose paintings and poetry were steeped in abstract surrealism.

“A small art school suited me best,” muses Robin. “I am mostly self-taught,” she explains, adding, “My love of art is in-born. I was always into stuff – I created stuff! Even as a teen I collected found objects.” She loves texture and textiles. Robin remembers being fascinated with things found on the ground like scraps of telephone wire, broken pieces of pottery, or vintage dishes. When her boys were younger, they would come home from school and look for her in her garage studio and show her what they had found during the day. 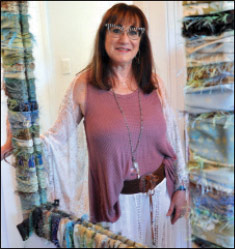 Robin reflected in her handcrafted mirror

Robin can still be found creating things in her studio – now a rather hot garage. Here they are, bins of ‘found’ things! Works in progress. Stuff. The door itself has been chalkboard painted and has a meaningful quote: “Life Lessons from Dr. Seuss, Be positive. Don’t cry because it’s over; Smile because it happened.”

Speaking of quotes, Robin loves to display them and changes them frequently. To the right of the front door is an old cabinet door that has also been chalkboard painted. Written in chalk by Robin, found on Facebook, is a telling sample: “Never ask a woman eating ice cream straight from the carton how she’s doing.”

It’s only fitting to have a quote directly from Robin: “We fill our homes with art that speaks of who we are. Our collections range from the whimsical to the profound. Varied art forms, from textile to jewelry, and painting to sculpture, express and often unearth our passions.”