Rotary Club Celebrating a Century of ‘Service Above Self’ 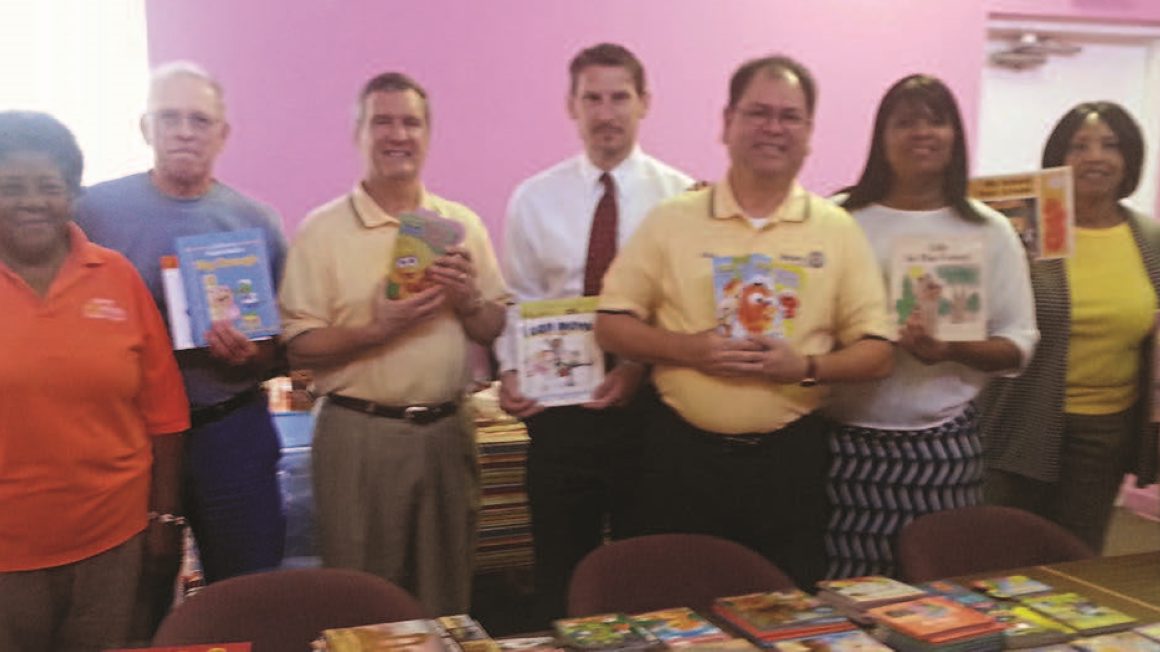 The Rotary Club of St. Petersburg will be celebrating its Centennial on January 25, 2020. The club was founded by none other than William L. Straub, revered editor of the St. Petersburg Times and father of our downtown waterfront parks, among many other accomplishments.
The St. Petersburg Club was ‘installed’ by the Tampa Rotary Club in a humorous ceremony at the Detroit Hotel on January 2, 1920. In this ceremony, the new St. Petersburg Rotarians played the part of infants being both ‘weaned and baptized.’ Bill Straub was garbed as the ‘mother’ and behind him came the new would-be Rotarians, each dressed in the flowing robes of an infant, carrying a rattle, and, according to the Times, rendering the air with ‘balloon-made’ cries. 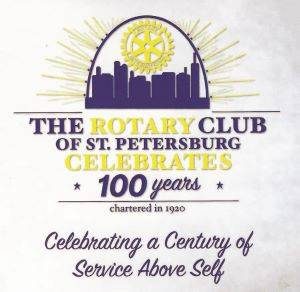 The purpose of Rotary is to bring together business and professional leaders in order to provide humanitarian service and to advance goodwill and peace worldwide. Rotary was founded in Chicago in 1905. The name came from the initial practice of rotating meetings among members’ places of business. While this practice did not last long and regular meeting places were soon designated, the name stuck. The St. Petersburg Rotary Club was among the first 200 clubs. Today there are more than 35,000 clubs worldwide. Rotary’s mantra is Service Above Self.

The first regular meeting of the St. Petersburg Rotary Club appears to have been held on February 20, 1920, at the Spa on the Approach to the Municipal Pier. Straub served as the club’s first president. At that time, Straub was taking a hiatus from the Times to serve as
city postmaster. Banker and city commissioner Alfred F. (“Ferdy”) Thomasson served as the club’s first vice president, and L.A. Whitney served as secretary-treasurer. Whitney was the secretary of the Board of Trade who invested $1,200 of his personal funds in 1914 to help underwrite and bring the World’s First Airline to St. Petersburg.

Aside from these three officers, the club’s charter members reads like a Who’s Who of 1920s St. Pete. A few of the notable names include Lew Brown, editor of the Evening Independent; George S. Gandy, an investor and builder of the Gandy Bridge; Roy Hanna, a prominent Republican, conservationist, and city postmaster; Al Lang who brought Major League baseball spring training to the city and served as mayor; and Frank Fortune Pulver, owner of the Detroit Hotel and the city’s flamboyant 1920s millionaire mayor. 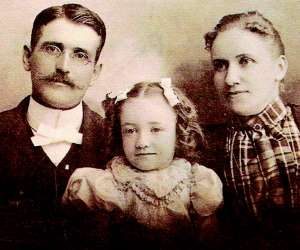 William L. Straub – with wife Sara and
daughter Blanche, longtime editor of
the St. Petersburg Times and champion
of the Downtown Waterfront Parks –
was the founder and first president of
the Rotary Club of St. Petersburg. A
monument to his legacy is located in
South Straub Park. Circa 1899.


soon established at the First Baptist Church opposite Williams Park. One of the first programs was a fund-raising drive for Armenian relief. A weekly newsletter, the Sunbeam, was launched likely with the help of Bill Straub and the St. Pete Times. The club has faithfully kept an archive of these newsletters dating back to 1922. They provide a unique insight on life in St. Petersburg over the past 100 years. Space does not allow a recount of all the club’s many decades of fellowship and service to the city, but a few examples from its earlier
history follow.

The 1920s was a boom era for our city and this is reflected in the Sunbeams. Volume 1, Number 1 summarized the message of new President Charlie Carr who succeeded Bill Straub. Carr was also a principal at the Times, serving as manager. Quoting his predecessor, he embraced the slogan “Rotary is different” – meaning that Rotary was a service club as distinct from a social club – and also called upon the club to be “the vital force in the development of the Sunshine City.” In that same edition of the Sunbeam, it was noted that $1,653.80 had been
given by club ‘Rotes’ (early acronym for Rotarians) for the benefit of county schools. This amounts to $25,000 in today’s currency. In the previous year, the club underwrote a baseball field for use of schools at Waterfront Park. The following year, the club boosted
the city’s economy by sponsoring the Rotary District convention attracting some 1,000 Rotes.

The 1930s Great Depression was tough for St. Pete, just as it was for the nation as a whole. This is reflected in the tone of the 1930s newsletters encouraging members not to be disappointed by poor economic conditions. As one newsletter began, “Smile! The world is blue enough without you feeling blue.” But the Depression did not dampen club civic activity. A 1931 newsletter reported the sponsorship of bands in the school system. Among all the bands were some 200 harmonica players. The best players were selected for a special band made up of 46 students. They were given uniforms composed of white trousers, a coat of blue-trimmed gold, and a naval cap. The newsletter
reported, “They’re a snappy bunch and they know how to ‘strut their stuff.’” Also the club was energized by a visit from Babe Ruth in 1935 arranged by Rotarian Al Lang, our great baseball mayor.

With the onset of World War II, the tone of the Sunbeams became more somber, as one would expect. Members began to volunteer or be called up for wartime service. The first member to be called was Russell Stratton, Times credit manager, joining the Navy, soon to be followed by Dick Carlisle, joining the Army. Club speaker topics such as “St. Pete’s Civil Defense Program” began to appear. At that program, the Rotes were informed that in case of attack, the city was prepared to evacuate 60,000 to 70,000 people in six or seven hours.

While the club’s 1920 installation ceremony was unique with ‘mother’ Straub and his baby Rotes, the club achieved a new plateau in January 1949 when new members were inducted by telecast from Maas Brothers Department Store to the club’s meeting at the Suwanee Hotel (now the County Building). This was the first actual television broadcast in Florida. The Radio Corporation of America (RCA) promotion
manager commented on that occasion, “You people in St. Petersburg have the greatest weather and natural beauty in the world to sell. If you don’t use it, your competitors will. Imagine what would happen now if the people of Denver could be shown a sample of the summer weather St. Petersburg is enjoying at this moment.”

The Sunbeam summarized the club’s history as of 1973: “The St. Petersburg Rotary Club was founded January 2, 1920 by the Rotary Club of Tampa. Being a tourist town, we soon adopted the name ‘Winter Home of Rotary International.’ The peak came in 1950 when we were host to 714 visiting Rotarians at one meeting, and we were glad to share this honor with Gulf Beaches, West St. Petersburg, Clearwater, Pinellas Park, and Sarasota clubs which we helped to charter. Our oldest active project is our service to handicapped children which consists now largely of dental correction. We sponsor three Interact Clubs and a Boy Scout Troop at Nina Harris School for Exceptional Children. We recognize leadership in speech and scholarship, and in the Police Department.” Interact is a school-based Rotary service program for young people ages 12-18. Services to handicapped children included support of the American Legion Hospital for Crippled Children, now Johns Hopkins Children’s Hospital.

The club began with a membership of 49 in 1920-21. This peaked at 240 in 1964-67. Current membership is 100. In the club’s earlier years, attendance was taken particularly seriously. At one meeting in the 1930s, the attendance committee arranged for a corps of ambulance attendants with their ambulances and husky cops with a ‘Black Maria’ (a police vehicle for transporting prisoners) to be present to search out late and absent members. On occasions, the St. Pete Club held national records for 100 percent attendance. But, due to the demands of present-day business activity often requiring frequent travel, this standard has been relaxed. A major reason for membership decline is that the club sponsored formation of many other new clubs over the years in St. Pete and nearby. Rotary also assigns each member an occupational classification. At one time, in order to encourage occupational diversity in the clubs the number of members holding a particular classification was limited. While classifications are still assigned, previous restrictions on the number of members having them have also been relaxed.

While the club maintained active women’s programs from its inception, the first actual female member was Beth Houghton, who was until
recently the executive director of the Free Clinic, and is now executive director of the Juvenile Welfare Board. Georgia Brandstadter-Palmer served as the first woman club president. The first African American member of the St. Petersburg Club was civil rights leader and educator Emmanuel Stewart, who joined in 1971. Educator Elliot Carr was the club’s first African American president. 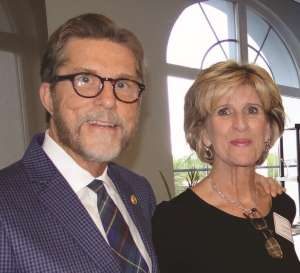 Bob Carter – pictured with his wife Yvonne –
was specially elected by his fellow  Rotarians
to serve as club president during the
centennial year. He is the only Rotarian to
serve as president twice, having previously
served in 1990-91.


Over the past 100 years, the club has engaged in innumerable civic and charitable causes. Some of the more recent ones include helping to build Habitat for Humanity homes; supporting the Salvation Army’s Sally House with volunteers; reading to children and providing books at Happy Worker’s Day Care; mentoring young people through Rotary programs such as Rotoract, Interact, and Rojans; annually honoring local law enforcement through the Ned March and Bud Purdy award for outstanding service; providing US Constitution handbooks for school civic classes, and supporting summer camps for challenged children and adults. Annually, dozens of local charities are provided with financial support, and major fundraisers have generated as much as $50,000. In times of crisis such as hurricanes Michael and Dorian, volunteer and cash support is provided. Internationally, the club participates in Rotary’s Polio Eradication, Clean Water, Health Clinic, and Mini-Business Support programs.

This year the club is all abuzz organizing its centennial. Club president Bob Carter notes that “the club has been exploring its unique history and legacy the past few months. The next six months will be devoted to determining future directions building on that legacy. Our club has been absolutely essential in the molding of our community and will continue to be the preeminent club for the next decades to come. I am very honored to be the only repeat president in the club’s 100 year history.” One of the club’s immediate goals is to highlight its community service by raising $100,000 for the St. Petersburg Free Clinic “Pack-A-Sack Program” benefiting undernourished and hungry children throughout the city. Another project will be the total refurbishment of the monument to William L. Straub in the northeast corner of South Straub Park across from the Museum of Fine Arts. A Centennial Banquet will be held at the Yacht Club on Saturday, January 25th.

Sponsorships are available. Call 727-822-3277 for more information about the Centennial Banquet or Rotary Membership.