Saving Tampa Bay Waterways One License Plate at a Time

Sometimes it’s easy to tell why – out of the endless options available – the driver in front of you chose that particular specialty license plate for his or her car. They may support one of the branches of the armed forces, have graduated from that college or university, or are pledging loyalty to an athletics franchise. What isn’t always clear is where that extra fee you pay for the license tag goes.

If you see a plate with a silvery tarpon leaping out of the water against a greenish-blue background, consider this: Since 2000, proceeds from this tag have generated funding for 330 grants which support Tampa Bay restoration and education projects across the region. At $27 for the first year,and $17 every year after that, the Tarpon Tag is one of the lowest-cost specialty license plates in toward mini-grants for school, neighborhood associations and other organizations that are working to restore and protect Tampa Bay waterways. 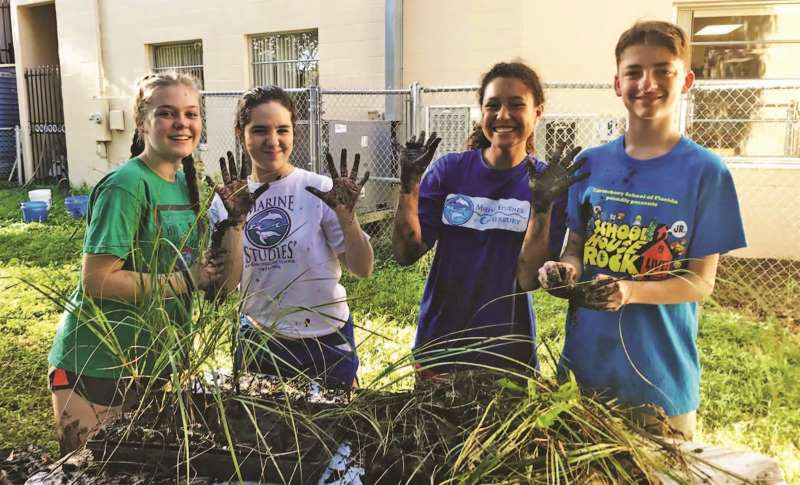 Established in 1991 and administered by the US Environmental Protection Agency under the Clean Water Act, the Tampa Bay Estuary Program is charged with restoring and protecting one of 28 “estuaries of national significance.” To help raise funds for cleanup efforts, Florida Senator Jim Sebesta (R-Pinellas) and Florida Representative Bob Henriquez (D-Tampa) co-sponsored a bill to create the Tarpon Tag, which went on sale in 2000 after being signed into law by Governor Jeb Bush.

The Tampa Bay Estuary Program’s governing board voted to commit proceeds from the Tarpon Tag toward community-based restoration and education projects through its Tampa Bay Mini-Grants program. The idea was to make protecting the Tampa Bay Estuary a community effort, empowering citizens to take ownership of caring for their little slice of the bay.

Since then, several local organizations in the greater Northeast communities of St. Pete have been active participants in this grant program, which offers funding of up to $5,000 for projects that not only meet the Tampa Bay Estuary Program’s mission, but also educate the community on how to sustain the health and well being of the bay. 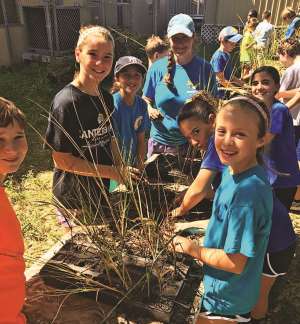 Canterbury School of Florida has been the recipient of multiple awards over the years, with its Marine Studies Program using mini-grants for such projects as expanding a marsh grass nursery, and creating an outdoor classroom where teachers from several area schools can promote Tampa Bay awareness and education. “Part of our mission statement is making environmental stewards for the world,” says Jenna LoDico, director of marine studies at Canterbury, “and Tampa Bay Estuary Program makes that happen for us.”

Coffeepot Bayou Watershed Alliance (CBWA) used its mini-grant this year to support the purchase of water quality sampling equipment and to host cleanup events which included invasive-plant removal and planting of native plants. In April 2019, nearly 80 volunteers from nearby schools and neighborhoods put in close to 175 hours removing plastic bottles, styrofoam, and 100 pounds of cigarette butts from the bayou. As part of these events, Canterbury and North Shore Elementary School students conducted ecological surveys and learned ways to reduce debris entering Coffeepot Bayou.

Walt Jaap, a former scientist, Snell Isle resident, and coordinator of the CBWA, says that his group is “grateful for the Bay Mini-Grant we received from the Tampa Bay Estuary Program to do good things inCoffeepot Bayou.” He adds, “Funds support water quality monitoring, deploying, and cleanouts for a WATERGOAT trash containment net, cleanup events, removing invasive species, and planting native plants.” 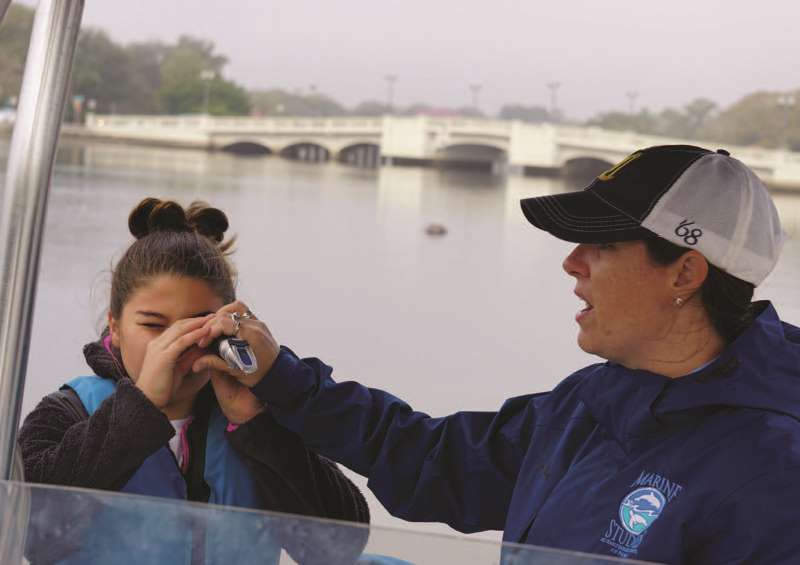 Lucy Trimarco of the Friends of Crescent Lake (FOCL) asserts that funding from the mini-grant program has helped volunteers transform Crescent Lake “from a barren aquatic desert to a rich ecosystem.” When the group began 12 years ago, FOCL made an agreement with the city that its volunteers – which include motivated residents, scientists, planners, and educators – would plant and manage wetland marshes in the lake if the city committed to not spraying the marsh plants with herbicides.

Four grants later, a wetland ecosystem has evolved, which, according to Trimarco is “capable of assimilating nutrients, improving water quality, and creating a bird and wildlife habitat.” She goes on to add that, “Last winter there were 100 American White Pelicans at Crescent Lake, feasting on the small fish and little critters that the marshes provide.” 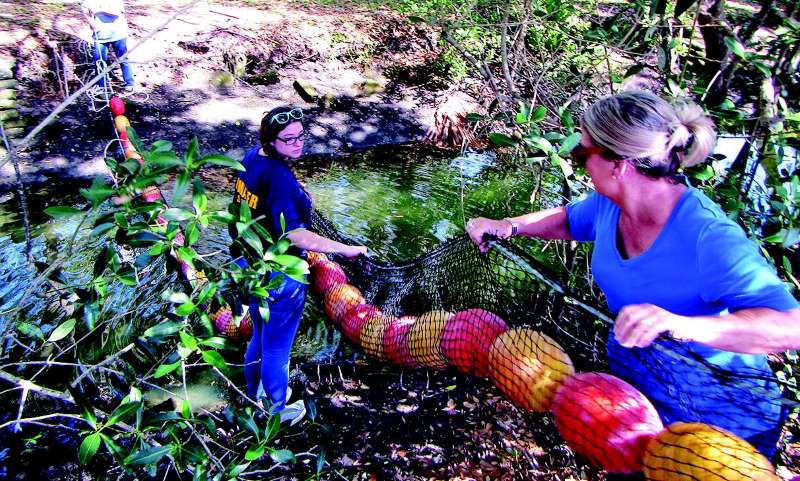 The results of these efforts are clear. “Water quality in Tampa Bay has improved steadily in recent decades due to pollution-reduction projects and restoration of bay habitats,” says Ron Hosler, program administrator for the Tampa Bay Estuary Program. He adds that Tampa Bay has “shown steady and consistent seagrass growth in recent decades,” nearly doubling the acreage mapped in the early 1980s after declining for years.

“No one project makes a big difference,” says Thomas F. Ries, president of the Ecosphere Restoration Institute in a short film documenting TBEP’s work, “but collectively, we have major improvement underway in Tampa Bay.” 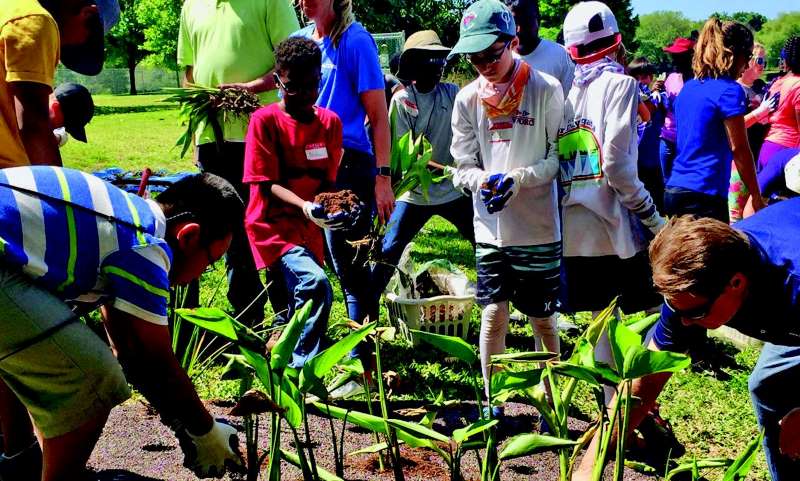 Friends of Crescent Lake have helped restore the lake.

Keep The Success Going: How You Can Help

Maintaining the forward momentum requires more than cleanup and goes beyond even restoration. Coaching the public on how to keep Tampa Bay’s waterways from falling into disrepair again is vital. This is why TBEP – in addition to conducting research and implementing strategies for bay restoration – also develops programs to educate citizens about ways to prevent water pollution and protect Tampa Bay. Education initiatives include making free downloadable publications available on its website, as well as providing expert guidance to mini-grant recipients. Walt Jaap, of the CBWA points out, “The funds, expertise, and advice we have received from the TBEP are a huge reason for our success.”

The Bay Grants program supports community-based restoration and education projects focusing on the Tampa Bay Estuary. Empowering citizens through programs such as this helps foster an environmental ethic and promote community stewardship of the bay. The Tampa Bay Estuary Program is, as Hosler puts it, “an effective partnership of federal, state, and local governments, private industry, and our community.”

Across TBEP’s region, which encompasses Pinellas, Pasco, Manatee, and Hillsborough counties, as many as 19 community organizations were awarded $77,000 in grants during the 2018-2019 funding cycle. But, that number is down significantly from the program’s peak year in 2010, when $122,000 worth of grants were distributed. The reason is directly related to sales of the Tarpon Tag. Fewer Tarpon Tags have been sold in recent years, which means fewer community projects can be funded. “Dressing a vehicle up with the Tarpon Tag is a simple, inexpensive step that can contribute to healthier waterways,” says Hosler. Projects and organizations benefiting from the program vary greatly, but the common goal remains consistent: protect and restore Tampa Bay.