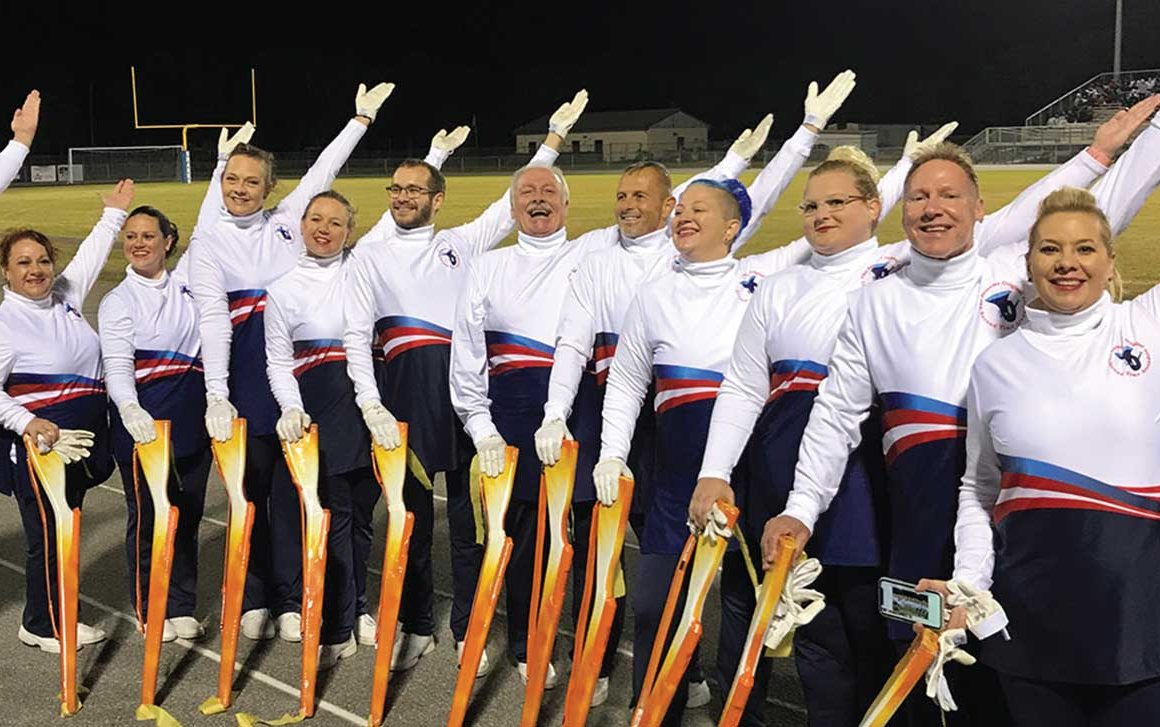 As if St. Petersburg residents needed one more reason for civic pride… In case you didn’t know, we are home to the Awesome Original Second Time Arounders Marching Band and Auxiliary. This not-for-profit organization is for those who spent time in a marching band in high school, college, or military service and now miss it. They are easy to recognize. When a drumbeat starts, they start humming the tune and unconsciously begin marching in place. This is the place for those who would like to experience the thrill of it all again. Last year, the group – now 450 performers strong –  was invited to participate in the Thanksgiving Macy’s Day Parade, considered the ‘Super Bowl’ of marching bands. St. Petersburg was well represented, and we have the inside scoop from two of our very own performers. 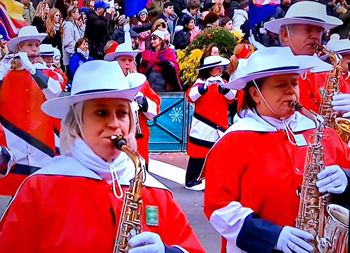 The Second Time Arounders consist of musicians, a flag line, rifles, and majorettes. While there are no tryouts per se, there are required grueling practices. As Frank Hay – section leader for rifles – explains,  “That means try it again, one more time.” This really means at least three, four, or ten times more! His group must master the toss and catch, flourish, and other moves all set to the tempo of the band. This takes skill, eye-hand coordination, and practice… and more practice. Frank comes across as an easygoing, kind-natured individual, though in his role as section leader, his command personality must certainly take over to guide his section into order. (Think of herding cats).

Frank has been with the Second Time Arounders for 14 years, give or take. He began in marching band playing the mellophone at Grissom High School in Huntsville, AL. For those unfamiliar, a mellophone can be described as the marching version of a French horn. 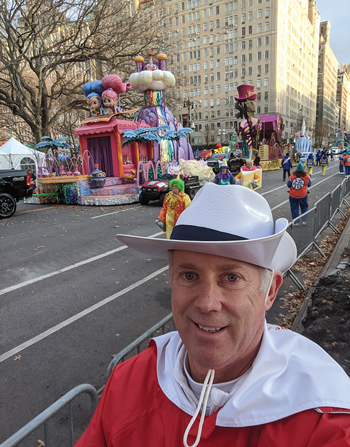 Brett Husselbaugh on the west side of Central Park in
the parade staging area.

From there, Frank went on to attend Jacksonville State in northeast Alabama, where he continued his musical pursuits as a member of the Marching Southerners. Frank graduated with a degree in Music Education and Business Administration, the latter ultimately becoming his professional pursuit.

Thanksgiving Day 2019 was Frank’s second time marching in the Macy’s Day Parade, as the ’Rounders (as they are affectionately known) were previously honored with an invitation to participate in the 2008 Parade.

Being chosen for the parade is no accident, and the application process for the 2019 show began two-to-three years ago. The band was among only nine bands selected from the 120 that applied. Frank, a resident of the Old Northeast, serves on the band’s Macy’s Committee. When not encouraging his group to “try it again, one more time,” Frank works as the global director of business development for Ceridian. His day job requires him to manage 43 employees across three continents for the international human capital management firm. Frank has lovingly renovated four different homes in the Old Northeast, though he says he is in his forever home now. He lives with his husband, Steve Deal, and rescue lab #9, Summer. Their mid-century modern home was recently featured in the 22nd Annual Candlelight Tour of Homes in the Historic Old Northeast.

It is worth noting that the group traveled to New York City by car, train, and plane, with friends and loved ones, swelling the group and their entourage to 800 folks. As part of the master plan, there was a pre-performance practice staged in Central Park at 6am, where participating ’Rounders warmed up, ultimately shedding their coats and marching toward Herald Square. The discarded coats, many purchased second-hand as part of the plan, were collected and provided to a charity as a donation to those in need.

For the Macy’s Day Parade, the band performed two musical pieces from memory: On Broadway, the 1964 classic by the Drifters, and Enchano, a spirited, Latin instrumental piece. For parade participants and their support team, the day started early and went long. Adrenaline fueled the group as they marched and performed for 2.65 miles in the parade. The weather turned out to be cold, in the low 40s with strong winds making it feel 10 degrees colder. The wind gusts threatened to turn the normally docile balloon characters into giant helium-filled monsters, with some bouncing around and knocking their handlers flat. 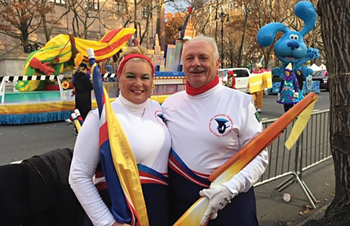 Brenda Conover and Frank Hay at the Macy’s Parade.

Brett Husselbaugh, a tall, athletic guy, and his wife Eileen –  neighbors from Venetian Isles –  are also members of the ’Rounders. Brett plays the alto saxophone and Eileen is in the pom-pom section. Brett’s day job is a computer consultant and Eileen is a US Postal Service letter carrier, which is probably good training for all that marching and dancing. Brett began his musical pursuits in the 4th grade when he played clarinet. Many years later, after a long absence from any public performances, Brett decided he would dress up for a Karaoke-themed party as Jimmy Buffet, playing guitar as part of the costume. “I couldn’t do it!” fumed Brett, which motivated him to pick up his “dusty” clarinet, hone his skill, and then transition his talent to the saxophone.

In 2014, Brett saw the ’Rounders play at a local event and was hooked. He couldn’t believe that they were actually good, with performers ranging in age from 19 to 80-years-young. Now six years later, Brett gushes about band director Bill Findeison’s ability to identify and cultivate “perfect pitch.” Brett confided that he loves it when the cadence starts. He says it “gives him chills and that energy makes it all worth it.” His enthusiasm was contagious when he talked about how much he looked forward to being in the Macy’s Parade!

You can find more information about the Awesome Original Second Time Arounders on Facebook, where their local appearances are listed and information for joining the group is available. The group is open to non-musical supporters as well, and would welcome time, talent, or treasure from the community. 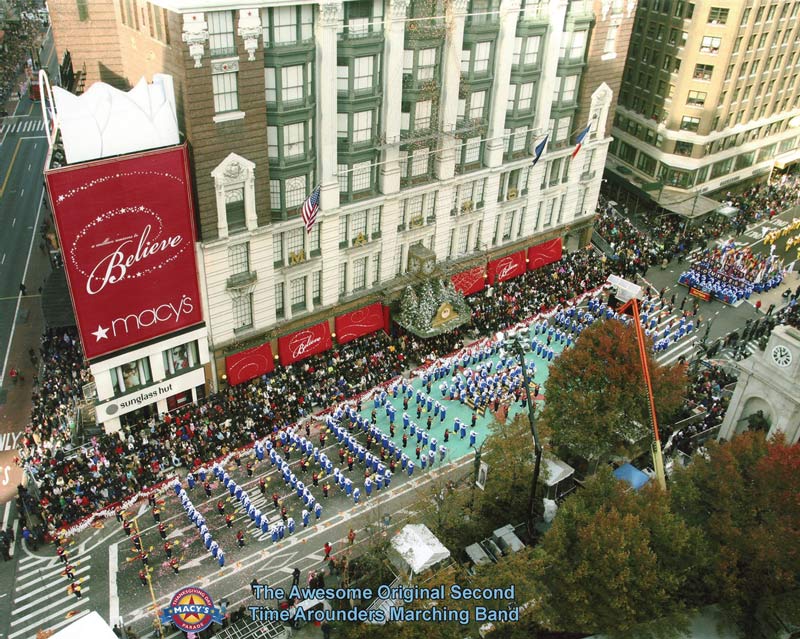 The Second Time Arounders at the Macy’s Parade in NYC.