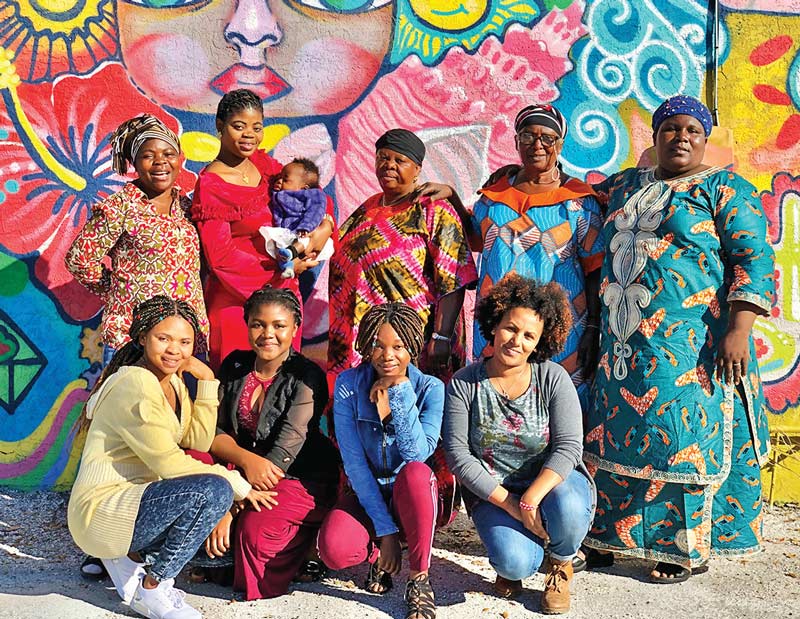 The US has long been a beacon of hope to people who wish to make new lives for themselves. But moving to and adjusting to a new country can be difficult without some friendly help. That’s where the Sew Much Hope Project, founded by a mother and daughter team – Janet Meyer, a resident of the Old Northeast, and her daughter Courtney Erickson – comes in.

Sew Much Hope Project is a collaborative social enterprise based in St. Pete that gives women who are legally settled refugees the chance to learn how to sew and earn supplemental income to help their families. The goal is to lessen the stress of resettlement from war zones and refugee camps through a supportive community environment.

The importance of community in a new place can’t be underestimated. “One Saturday, we welcomed a new woman from the Congo, and I started to introduce her to another Congolese woman who is friendly and outgoing,” says Courtney. “I thought she could help the new woman get acclimated to our group. Well, as soon as they laid eyes on each other they jumped up and started screaming and crying and hugging. It turns out that they had met each other in a refugee camp in Uganda and hadn’t seen each other since. Each woman had no idea that the other was in the US, much less in the same town.”

Courtney says she’ll never forget that moment. “I can only begin to imagine how it would feel to find a familiar face halfway around the world, during a moment of such uncertainty when nothing around you is familiar.”

Sew Much Hope Project started in conjunction with the St. Mary Our Lady of Grace Catholic Church, where Janet was a member of the congregation. Since 2016, the church’s interfaith ministry has been supporting refugees who have relocated to this area from all over the world. Janet and Courtney wanted to assist this unique community and suggested creating a sewing program, which they launched in 2017.

According to Courtney, to date, 32 women have participated in the program. Currently, most of the women in the program are from the Democratic Republic of Congo, but in the past, others have come places as diverse as Ethiopia and Venezuela. In the beginning, when they were meeting at the Unitarian Universalist Church by Mirror Lake, the women learned sewing skills under the guidance of volunteer sewing instructors, while their children enjoyed an educational playtime thanks to a team of volunteer teachers and helpers.

Over time, as the program evolved, it moved from the Unitarian Universalist Church by Mirror Lake to local nonprofit Answered Prayers Project, and then its current home at the Allendale United Methodist Church. Along the way, the program and the needs of the group changed. As the participants became more committed to selling their work, they decided they needed more time to sew. “We decided as a group to end the children’s enrichment program which then allowed us to plan much longer sewing workshops,” says Courtney. The types of items the women are learning to sew has also evolved, starting with simple pillowcases and bags, and moving on to more sophisticated artistic items such as origami bags and necklaces, upcycled silk neckties with wood and metal accents – and more recently, masks to help prevent the spread of COVID.

All of the fabric used in the project is donated. “Last year, one of our translators went home to Kenya and brought us back a lot of wonderful African fabrics,” says Courtney. “The bags created from that fabric sold fast.” The group also relies on additional sewing-related items, including scissors, thread, and pins. They occasionally accept high-quality, working-condition sewing machines, but do not accept all donated machines because they have limited storage space.

Recently resettled refuges find out about the program primarily through Gulf Coast Jewish Community and Family Services, one of the biggest and most comprehensive refugee resettlement agencies in the St. Petersburg area. “We are becoming well known in the refugee-services community and they help spread the word,” says Courtney.

In 2019, Sew Much Hope Project formed an LLC with the intention of becoming a co-op and they started attending local markets so the women could sell their handiwork. “The first time that we paid the women after a market, one woman started to cry and said, ‘I can’t believe that they wanted something that I made,’” Courtney says.

Courtney points out how rewarding it is when customers learn about the program and express their enthusiasm for it. “I get really excited when customers fall in love with our bags or necklaces because of the colorful prints or the beautiful handiwork, and then I get to tell them that they are also supporting refugees building new lives right here in St. Pete. Their eyes just light up,” she says.

‘It takes a village’ and Sew Much Hope receives support from many local charitable organizations. Daystar provided Thanksgiving meals for local refugee families in addition to other services throughout the year. And in January, the group received a donation of children’s bike helmets and toys from the St. Petersburg TimeBanks. “We work in tandem with St. Mary’s Church and Daystar a lot to help with general needs,” says Courtney. “Most of our families are registered Daystar clients and they have a special fund set aside for refugee families.”

Other items on the group’s donation wish list include silk neckties, 100 percent cotton fabrics in quantities larger than two yards, and cotton canvas. They occasionally ask for donations for specific items when there is a need in the refugee community. Check the Sew Much Hope Facebook page to find out more.

Recently, Sew Much Hope began partnering with the Refugee and Migrant Women’s Initiative (RAMWI), a nonprofit in the South Hillsborough community of Riverview. Both Sew Much Hope and RAMWI are members of the Tampa Bay Refugee Task force and by working together they plan to increase the capacity and positive social impact of both organizations. RAMWI is also hosting Zoom sewing sessions for women on both sides of the bridge. In January, a RAMWI Zoom call hosted 38 women from 15 countries and six interpreters.

“We continue to show the women that they can earn a supplemental income from the skills they are learning,” says Courtney. “However, although the product gets us out into the community and raises awareness, it is how we are connecting with the women in our group that is the important part.”