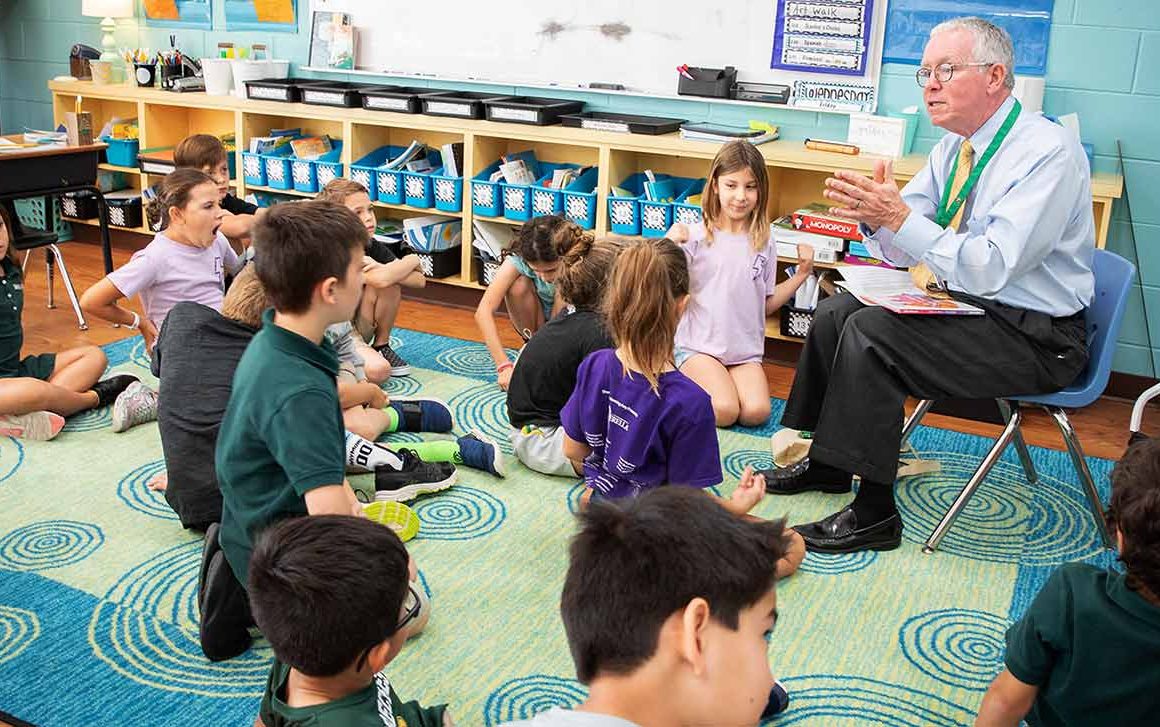 Like the fictional Albus Dumbledore of Hogwarts School of Wizardry, Mike Murphy – headmaster of Shorecrest Preparatory School – also has a bit of magic up his sleeve.

His work shines throughout the school’s campus and in the pages of his new children’s book.

Recently, while recovering from knee surgery, Mike’s interests in travel, space (he had just been to Cape Canaveral), and his penchant for storytelling provided the perfect blend of ingredients for the creation of a children’s adventure series. The ideas came together so quickly that he was able to write not one, but three books, in rapid succession. Though he ha d often told stories to his two sons as they were growing up, this was the first time that the words seemed to effortlessly translate to paper. 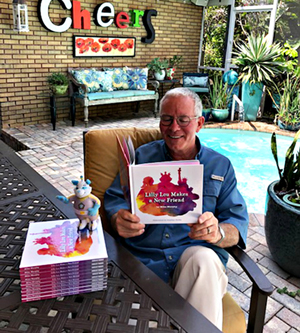 Just months after jotting his stories down… Poof! The first book in his series, titled Lilly Lou Makes a New Friend, has been published. “The writing came together in about two weeks,” said his wife, Robin.

Colorful drawings by St. Petersburg illustrator, Jonathan Hoefer, bring the familiar sights of the ‘Big Apple’ to life. Even the mayor steps in to help. Read closely and you’ll find social commentary tucked into the plot. A happy ending promises more ‘Moozite’ adventures to come, as they visit Washington DC and other places in the US.

Mike himself was a reluctant reader as a boy. His mother had a new baby the year Mike was due to go to kindergarten, so instead, he stayed home and missed out on some important readiness skills. He also had an auditory processing issue that made it difficult to decipher certain sounds. Anyway, he jokes, “Who had time to read when there were balls to hit and trees to climb?” Keeping this in mind, Mike hopes that his new series is just the sort that will capture the attention and hearts of early elementary readers.

Mike put a copy of Lilly Lou Makes a New Friend to the test by reading it aloud to a class of third graders. They, in turn, provided a valuable tip for future books by asking a question about the Moozites. “What are their superpowers?” they all wanted to know. Taking this into account, Mike assured me that the Moozites will display their superpowers in all upcoming episodes! Mike also has some important advice of his own for parents and teachers. “Be patient. Read to your children every day. Set aside time for family reading. Find books the individual student can finish quickly.”

Pulling Together with Pride

Mike has been headmaster at Shorecrest since 2005, when he came to St. Petersburg from Atlanta where he had been head of school at Pace Academy. Mike’s 14-year tenure at Shorecrest has brought much transformation, especially this past spring, when life-long dreams became reality on campus. Shorecrest’s Charger Commons facility opened in March, making way for new state-of-the-art dining areas and a common outdoor space where students of all ages connect every day. Thanks to the generosity of three families, it is also home to the newly named Mike Murphy Experiential School. Here, the youngest of students experience the enchantment of learning. One highlight – a bright and inviting library media center for the Experiential and Lower Schools – sits adjacent to the new Maker Space/Technology Center, where, according to Mike, younger children “engage in programming, simple robotics, and the development of projects or products to enhance their studies.” New Upper School facilities will be housed on the second floor which is still awaiting completion.

“I am proud of how the community united to transform the Shorecrest campus into one of the most beautiful schools in Florida,” Mike wrote in an email. “When I came [to Shorecrest], I could not understand how a school with such a successful record of educating students and sending them to great universities could thrive in facilities that did not match the quality of the program. Today, thanks to the generosity of the community, the facilities at Shorecrest match the quality of the programs the faculty and staff provide to the students.”

Personal interest in the growth and development of all Shorecrest students has been another one of Mike’s secrets to success. For example, the parents of one of the students at Shorecrest felt that their son wasn’t living up to his potential and told Mike they were considering pulling him out of school. Instead, Mike became the boy’s personal mentor. “It was rewarding to see something click in him,” said Mike. “By senior year, he had taken on a major leadership role at school and in the community. He was accepted in a pre-med program and is now about to complete medical school.” 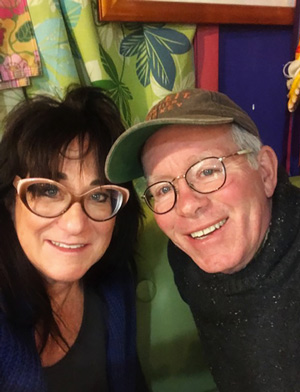 Mike Murphy and his wife Robin

Mike will be stepping down at the end of the 2020 school year. Nancy Spencer, associate head of school at Westminster School in Simsbury, Connecticut, was recently announced as the new Shorecrest head of school beginning July 1 of next year. Mike will leave big shoes to fill, but is confident that he leaves in place “an incredibly talented administrative team to support our students.” What will he do with his spare time? Besides his interests in birding, hiking and camping, and traveling, he says, “In my perfect world, the Lilly Lou series will become popular with children and families, allowing me to travel to many cities to gather information for new books about Lilly Lou and the Moozites. I am open to a variety of options, including consulting, being an interim head, or hiking the Appalachian Trial. I also hope to travel with my wife, Robin. In short, I plan to stay busy.”

No doubt about it… Old Northeast resident Mike Murphy leaves a trail of magic wherever he goes. Watch out universe… here he comes!