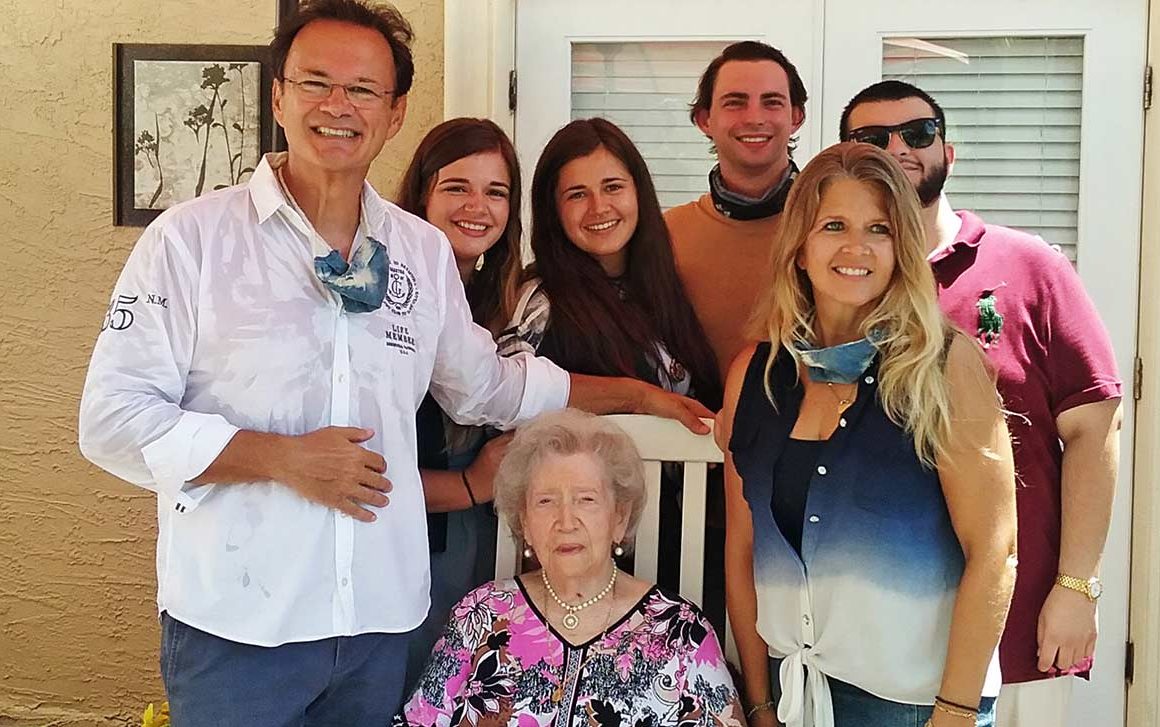 Our grandmother, Luisa Bernarda Jimenez was born on Friday, August 20, 1920, in Meneses, a small town in what was then known as the Las Villas Province in north central Cuba. But that’s not what her birth certificate says. It claims she was born in 1921, not 1920. And the reason for that discrepancy is more relevant today than ever.

The Spanish Flu pandemic of 1918-1920 was raging throughout Cuba the year Luisa was born, causing fearful locals to stay home and delay trips to larger municipalities, where birth certificates were recorded. So our grandmother’s birth wasn’t officially recorded until a year after she was born.

Now, a century later, just as she celebrates her 100th birthday, our grandmother is living through a second pandemic. That she has endured two global pandemics in her lifetime comes as no surprise to those who know her. It’s yet another extraordinary aspect of a woman who has lived a truly extraordinary life.

Now retired and living with our parents on Snell Isle, Luisa was at one time a talented costume designer and seamstress. She worked with well-known theater wardrobe designer Lucio Boliver to create lavish, iconic outfits worn by international stars such as Siegfried & Roy, and performers with Las Vegas productions such as the Folies-Bergère, Hallelujah Hollywood, Merv Griffin Productions, as well as for Bahamas Casino-Resorts, cruise ships and much more.

In 2003 on her birthday, Siegfried & Roy surprised Luisa by dedicating their show that night to her and presenting her with a birthday cake backstage. It was just two months later that Roy Horn suffered an onstage accident with his white tiger Mantecore.

This year, our family and friends practiced social distancing and gathered outside our home to celebrate her 100th-year milestone with a Mariachi band playing favorite romantic songs from her native Cuba. Councilman Ed Montanari presented her with a proclamation from the city.

Luisa was the fifth of six children born to Jose and Eusebia Sardon. They were immigrants from Spain whose families had come to Cuba in 1895 and 1899 to escape economic hardship and civil unrest brought on by years of social, political, and religious division. Yet, ironically, as they arrived in Cuba, the country was in the middle of its War of Independence against Spain, and then the Spanish-American War, in which the US sided with Cuba against Spain.

Luisa’s early years in Cuba were positive ones. She grew up in a small sugar-mill town managed by her father. Her mother was the town’s self-taught nurse-doctor “Doctora” since the nearest MD was over an hour away by horse and buggy. The train came through only once a day.

When she was 11, Luisa’s family moved to Caibarien, a larger and more sophisticated city in Las Villas Province. She developed a love of drawing and spent a lot of time looking through fashion magazines from Havana, New York, and Spain. It wasn’t long before she began creating her own fashions and sewing fancy dresses for her older sisters to wear on special occasions.

Luisa eventually moved to Havana, after marrying our grandfather Ramon Casimiro Jimenez, a young medical and accounting student at the University of Havana. The couple had three children: two sons, Ray and Joe, and a daughter, Miriam. When she wasn’t busy with her growing family, Luisa continued to pursue her passion for fashion and design.

At the time, Cuba was a glamorous international playground for celebrities and movie stars. Beautiful gowns filled the window displays of the finest stores in Avenida Galiano and San Rafael, the heart of Havana’s commercial district. Luisa could draw the latest fashions down to the smallest detail and easily duplicate them at home on her sewing machine.

Everything came to an abrupt end in January of 1959, when Fidel Castro overthrew the government of Fulgencio Batista. Fearing the oppression of the new Communist regime, our grandfather’s siblings immediately fled Cuba for Chicago, and, five years later, Ramon, Luisa, and their children followed.

The decision to leave Cuba was not an easy one. Our grandparents left behind family, friends, and everything they had worked for, not knowing if they would ever see their loved ones again. They also had no knowledge of the English language and no personal resources, since Castro had made it illegal to leave Cuba with any money or valuables. In their mid-40s, with three small children, they had to start life over again in a brand-new place.

Although being a Cuban political refugee in Chicago in the 1960s could be intimidating and overwhelming, our grandmother adapted and embraced the challenge. For the first time in her life, she found a job outside of the home. At APECO Copy Machine Company, she worked 8-to-10 hours a day, five-to-six days a week at an assembly plant.

In the few hours she had between work, commute, housework, church, and family, our grandmother found time for her first love – sewing new outfits for her children on her Singer sewing machine. Of that time in her life, she says one of her proudest moments was in 1972, when she became a US citizen.

In the 1980s, Luisa and Ramon moved to Las Vegas, where their children, now adults, had relocated. Unfortunately, during this time, our grandfather was diagnosed with Alzheimer’s. Luisa cared for him until his death in 1993. But it was also during this time that Luisa’s talent for fashion design and sewing blossomed. She met Lucio Boliver, a dynamic, young wardrobe designer. The two quickly became lifelong friends and Luisa assisted Boliver in creating elaborate costumes for shows in Lake Tahoe, Reno, Las Vegas, and on cruise ships. She loved it so much that at the age of 90, she was still working full-time. In fact, it was only in early 2015 – after some health issues – that our grandmother officially retired.

Three years ago, Luisa moved to St. Petersburg to live with our family: her youngest son, Joe Jimenez (our father), and our mother Angelina. These days she spends her time enjoying her newest hometown, playing cards and dominoes, and enjoying friends at the Suncoast PACE center two-to-three days per week (pre-COVID). A lifelong supporter of St. Jude’s Children Hospital and Wounded Warriors, she keeps her mind keen with wordbooks, cooking, and watching documentaries on history, nature, and travel.

Luisa is the proud grandmother of four – Alex, Angelica, Alessandra and Cristian – as well as too-many-to-count nephews, nieces, grand-nephews, and grand-nieces.

As a true Cuban, her favorite sport is baseball. Her favorite team is of course, the Tampa Bay Rays, and her favorite player is Ji-Man Choi.

Our remarkable grandmother has witnessed so much in the last 100 years, from the advent of electricity, to the first cars, the first man on the moon to today’s internet and cell phones. She’s lived through two World Wars, the Great Depression, several hurricanes, an earthquake, and having to flee communism. Her story is one of courage, hope, and determination as she has moved through challenges and didn’t let life’s painful chapters define her happiness or her success.