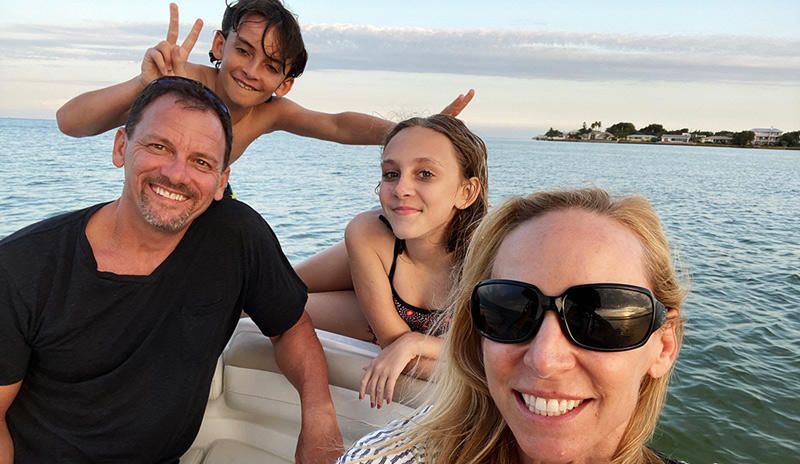 COVID-19 may have put a halt to many community and social events, but we are wired to be social, and somehow we always find a way to adapt through challenges. Snell Isle resident Dawna Stone is a local example of someone who has shown the discipline and determination to overcome any obstacle in her way, even a global pandemic. Empowered women empower women, and Dawna Stone – an accomplished author, entrepreneur, motivational speaker, and health, fitness and wellness expert – is that kind of woman.

With her sister Michele, Dawna recently launched the Virtual Women’s Half Marathon, with proceeds benefiting the Feeding America COVID-19 Response Fund. While there are other virtual races around the country, Dawna says this event – which takes place October 17-18 – is unique. Most virtual runs allow you to complete your run over a number of weeks or even months. That can make it difficult to stay motivated and stick to a training schedule. Instead, imagine hundreds of thousands of women across the country training for a virtual event that culminates in one specific weekend this fall. “We wanted all the fanfare that comes along with training for a live race so you feel like you are training toward something,” says Dawna.

How exactly will these virtual races happen? According to the website, “All distances can be completed virtually anywhere – on the beach, your neighborhood sidewalk, a mountain trail, or even a treadmill.”

Dawna is definitely no stranger to hard work, setting a goal, and meeting challenges. In fact, one could argue that it’s in her DNA. “I don’t ever remember not being an athlete,” Dawna recalls. She began as a swimmer at the age of six. By seventh grade, she was training six hours a day. Her day started at 3:45am when she carpooled to a training pool an hour away from home. She was that girl who arrived at school with wet hair. But, she was on a mission to be the best she could be, and let no obstacle stand in her way.

After graduating from the University of California at Berkeley, Dawna began a successful career on Wall Street, which left little time for swimming. Instead, she found a way to channel that energy toward a new athletic outlet – running. She ran her first 5K and was hooked! When she was 12, her swim coach – who had competed in the Hawaii Ironman Triathlon – had inspired her. She envisioned one day participating in that event herself. Finally, in 1999, she achieved her goal… but not without a stumbling block that would bring her one of her greatest life lessons.

After a year of hardcore training for the triathlon, and just days before the race, Dawna found herself in the emergency room in Kona, Hawaii, with a severe case of food poisoning. She spent three days in the hospital recuperating, and her doctors said she would not be able to participate in the race. A goal she had set for herself so many years before was about to be unrealized. But, Dawna was undeterred and decided to set her sights on getting herself well enough to fulfill her dream. Against all odds, she did just that. She completed the triathlon, in excruciating pain, not in the timeframe she had set for herself, and most certainly not in the way she had envisioned all those years… but she did it.

Looking back Dawna says, “It was the best thing that ever happened to me, because going forward, anything I ever did after that never felt hard or difficult. Nothing was ever as painful as mile 20 in that marathon. Not even childbirth.” Dawna continues, “The thing I thought was the worst ended up being the best thing for my life in general. Honestly, I learned more from that failed race than I’ve learned from any race where I’ve done great.”

From trial comes triumph. The pandemic has changed how we live for now, but there is always a proverbial silver lining if we choose to look for it. Dawna went looking and found it with the virtual races she and Michele are putting together October.

“I just think there’s something about having a goal, and it doesn’t matter if it’s a triathlon or walking a 5K of any distance – just getting off the couch and starting to move and doing something for yourself… that’s what it’s all about,” says Dawna. “I think that’s why I love creating these races – seeing all these women set these goals and then achieve something amazing. It excites me to know we had a little something to do with helping them achieve their goal.”

The original target was to have women from 20 states participate in the virtual race. By late summer, women from 44 states had registered, and now Dawna says she is hoping that women in all 50 states will participate. Dawna also adds that she expects the Virtual Half Marathon to be an annual opportunity that women across the nation can look forward to.

When Dawna isn’t busy creating women-empowerment events, she spends time with her husband, Matt Dieter, and two children, Kaelie and Luke. She enjoys everything that beautiful St. Petersburg has to offer, especially the local food scene. In 2015, she helped launch the first annual St. Pete Wine & Food Festival. Having lived in some of the culinary capitals of the world like NYC, Los Angeles, San Diego, and San Francisco, Dawna believes the St. Petersburg food scene is something to be reckoned with.

With all that Dawna has accomplished, it’s hard to imagine there isn’t one that stands out the most. But when asked, she says, “I don’t know if I have one. Maybe I haven’t had it yet? I feel good about everything I have accomplished, but I always want to do more, so I don’t think I’m finished yet…”