Spirit of the Vinoy: A Historic Haunt 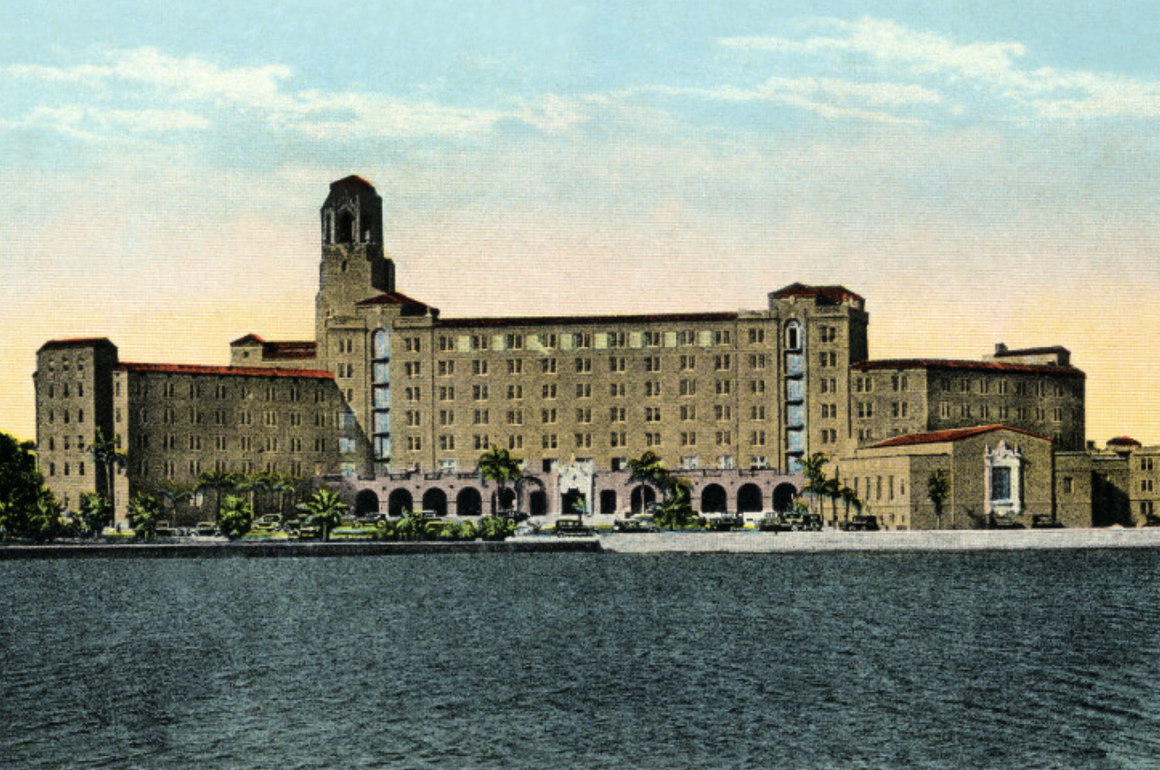 The Vinoy Renaissance St. Petersburg Resort & Golf Club has a long history as one of the grandest hotels in the area. Called “The Pink Lady” by locals, the hotel has watched over our local shorelines, and welcomed residents and visitors alike to admire her beautiful halls. But where there is beauty, there is also lore. It is said that the Vinoy not only hosts tourists but is the alleged home of spiritual inhabitants as well.

The building’s history is legendary. For the origins, we must go back to the 1920s when Aymer Vinoy Laughner hosted a party. Guest Gene Elliott, himself a real estate developer, noted the scrub land across from Aymer’s house could be put to much better use. Never one to waste time, especially while St. Pete was experiencing a building boom, Laughner agreed, and hired Henry Taylor to be the hotel’s architect.

Taylor is well known in this area as the designer of many iconic – and possibly haunted – buildings in the bay area, including Jungle Country Club Hotel (today, Admiral Farragut Academy), the Rolyat Hotel (now Stetson University College of Law), St. Mary’s Church, and even Comfort Station No. 1 (the historic public bathroom near the approach to The Pier). Ten months after Laughner commissioned Taylor – and for the then-astounding cost of $3.5 million – the Vinoy Park Hotel was completed. It opened in December 1925 to much fanfare.

The Vinoy experienced the ebb and flow of life along with the city. It suffered vacancies during the Great Depression and served as a training base for soldiers during World War II. It reopened after the war, but after several decades, it fell out of favor, and closed in the 1970s. The roof eventually collapsed, letting in rainwater, vagrants, and even claims that alligators had moved into the lower floors.

Though it was listed on the National Registry of Historic Places in 1978, for many years the fate of the iconic building rested on a knife’s edge. That is until its painstaking and historic $93 million restoration finally saved it from the wrecking ball. It reopened in 1992 with luxurious additions like a spa, and redesigned and updated rooms.

While the hotel has been restored to its “jewel” status, with such a long and rocky history, it’s no wonder numerous ghost stories have emerged from its halls over the years. Multiple instances of supposed spectral sightings include the following:

A woman dressed in white who is seen on the fifth floor. Some believe she is the ghost of the wife of Gene Elliott who died when she fell from the back porch of their house. This happened while the couple was going through a difficult divorce, which included a request for a hefty alimony. The lone witness to the event, a maid named Annie Gadsden, claimed it was murder, but vanished before the trial, allegedly on a one-way trip to Europe. She was never seen again. Some think that the ghost might be that of the missing maid.

Guests have also reported that a spectral gentleman haunts the old part of the hotel. Some claim that he is J.P. Williamson, the man who owned the land that Laughner bought to build his hotel. Others believe that it is Karl Abbott, the hotel’s first manger.

Some have claimed to see the ghost of a man dressed in a tuxedo who haunts the hotel elevators. He plays with guests by making the elevator stop, without request from the rider, on the fifth floor. The doors open to an empty hallway.

Not all the spirits are visible. Visitors have claimed to hear beautiful music coming from an empty ballroom, and ghost hunters speculate this could be the spirit of Paul Whiteman who once conducted music there. A few even say that there is a spirit that can be seen from the tower, even when it is locked, and no one should be up there.

And, because Babe Ruth once stayed there, some think that he, too, may have left some spiritual residue at the hotel. Some Major League Baseball players who have stayed in certain rooms reported feeling as if there is someone else with them – especially if they are visiting players from the Red Sox.

The hotel reached the pinnacle of ghostly legend when Jason Hawes, from Ghost Hunters, stayed in room 521 and allegedly found evidence of paranormal activity. The episode is titled Ghosts of the Sunshine State and was released as episode 18, season 4.

As a paranormal investigator, I have visited the Vinoy and even stayed in the same room Hawes slept in. I had very little luck meeting the woman in white, the tuxedoed gentleman, or any of the other characters described above. My stay in the haunted room was relatively quiet – no moving objects, noises, or doors opening. However, in parts of the night I did feel as if I wasn’t alone, even though I enjoyed the luxurious, pet-free, king-sized bed, and the freedom of not needing to clean the room myself. Was it a suggestion lodged in the back of my brain? Possibly, but I did end up checking out at 6 a.m. the next morning. I didn’t leave, however, until I took one more walk around the beautiful, and ghost-sighting-free, grounds.

Currently and until December 2022, the Vinoy is undergoing interior and exterior renovations. The front entrance is closed, the front drive, lobby, pool, bar, spa, and some guestrooms are also impacted. I wonder if this recent slate of construction might stir up a slumbering spirit or two.

Whether the hotel is haunted by ghosts, or simply by memories, The Pink Lady – a nickname it shares with its slightly younger coastal sister, the Don CeSar – remains a tribute to the beauty of St. Petersburg. Just as it was built to be a crown jewel for the city, its heritage and history remain a powerful tribute to those who saw the potential of our little ‘Burg, and to those who still do.