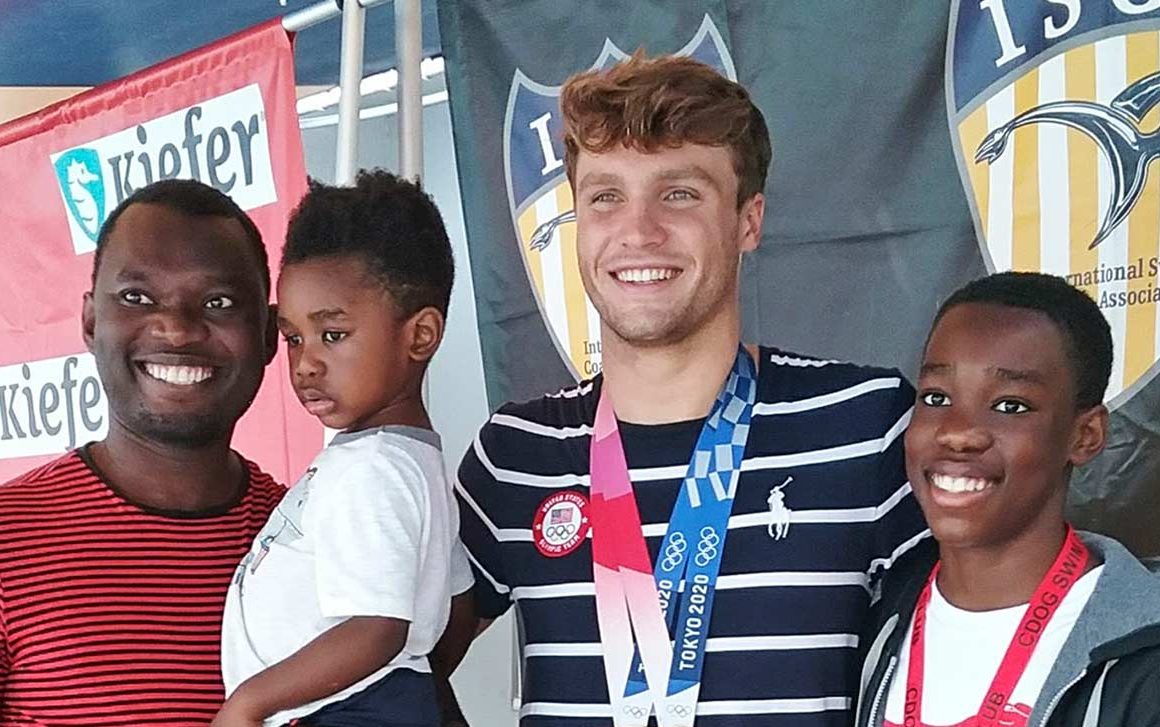 Even his journey home was memorable. While connecting through Newark airport, Bobby’s carry-on luggage triggered a security alert with the TSA. Bobby stepped aside diligently, waiting for personnel to check his bag. After answering the standard questions, Bobby watched as the TSA agent performed her search, exclaiming and apologizing as she procured his gold medals from his bag.

It’s perhaps unsurprising that the gold medals looked odd under a security scanner. This year, the Tokyo public donated recycled electronic components from phones and laptops to construct the medals in a sustainable, environmentally friendly initiative, before they were plated with gold, silver, or bronze.

Now that the Olympic games are complete, it’s back to real life for Bobby: a week of relaxation at home with family and friends, then off to start his senior year at the University of Florida. Bobby’s majoring in construction management. “I want to build people’s dream homes,” he explains with a wide grin.

Bobby is the third of the Finke siblings to compete impressively in swimming. His older sisters, Autumn and Summer, were both NCAA qualifiers, and SEC and ACC swimmers, and the family traveled to Olympic trials more than once for the girls. Summer swam for NC State and Autumn swam for the University of Florida. Today, Autumn is preparing to return to UF for law school. Summer recently completed her master’s in sports management from UF, and is an intern for the Tampa Sports Authority which manages Raymond James Stadium.

Their father, Joe Finke, is also strongly connected to swimming: he’s a coach for the St. Petersburg Aquatics (SPA), a year-round competitive swim team at North Shore Aquatics Complex. This year, he was honored as one of the top-10 age-group coaches of the year by the American Swimming Coaches Association.

“It’s still just unbelievable,” Joe says of Bobby’s victories. “I know it happened: he’s here and I can see the medals sitting on the dining room table, but it’s just unreal.”

Bobby grew up watching other great swimmers, like his sisters, his peers, their peers, and Olympic-gold-medal winners Nicole Hayes and Melanie Margalis. Paralympic swimmer Brad Snyder, who also trained at North Shore Pool, won five gold medals and two silver medals after losing his sight in an explosion while serving as a Navy bomb technician. He worked extensively with Coach Fred Lewis to regain his sense of positioning in the water and when to flip-turn.

“The [St. Pete Aquatics] program has produced some amazing swimmers,” Bobby says. “I hope to continue this legacy going forward. I’ll try to make the [US Olympic swimming] team in 2024.”

A few days after he returned from Tokyo, Bobby attended the ISCA (International Swimming Coaches Association) swim meet hosted at North Shore Pool. He greeted young swimmers, offered words of encouragement, smiled for photographs with them, and signed autographs. Both his father and Coach Fred looked on proudly at Bobby and the Olympic gold medals around his neck.

“This is everything he’s been training for his whole life,” Coach Fred says. “He did it.”

When asked what Bobby was like growing up, Fred describes the time his older sisters snuck him into the pool to swim a 50-meter race when he was four or five years old.

“I had my back turned for a moment,” Fred says, “and when I looked over at the pool, there’s little Bobby in a lane trying to keep up. But, the best story,” Fred continues, “is when Bobby was counting for his sister, Summer, and he leaned too far over with the counter paddle and fell into the water on top of her.”

Despite that particular swim meet misadventure, the siblings are closely knit and enjoy their swimming camaraderie.

“Everyone in the family is incredibly proud of Bobby,” Joe says.

When reflecting back at his Olympic experience, a look of wonder fills Bobby’s face. “It was a blur, but it was amazing,” he says. “The whole swim team was super close. We played card games and a Nintendo Switch and just hung out and socialized. It was great. After the race, when they showed the screen of everyone here at North Shore celebrating, I got so choked up. I was like, ‘That’s my pool!’ It really means a lot.”

At the ISCA swim meet, Bobby surveyed the sea of young swimmers, pride lighting up his face. “I used to be these kids.”

Standing beside him, Joe went on to say, “What’s more important than results or medals is the person he is. I’m in awe of Bobby.”

Not only did Bobby spend four straight hours with young swimmers and their families at the swim meet, he also volunteered at the meet. He took up the counting paddle and counted for the 800-meter freestyle race – the same race that a few weeks ago won him his first Olympic gold medal.

Bobby seemed energized by the buzz of the swim meet – and very happy to be home with this family and friends.

When asked about his values and what’s most important to him in life, he didn’t hesitate before answering with a contented smile, “Family.”