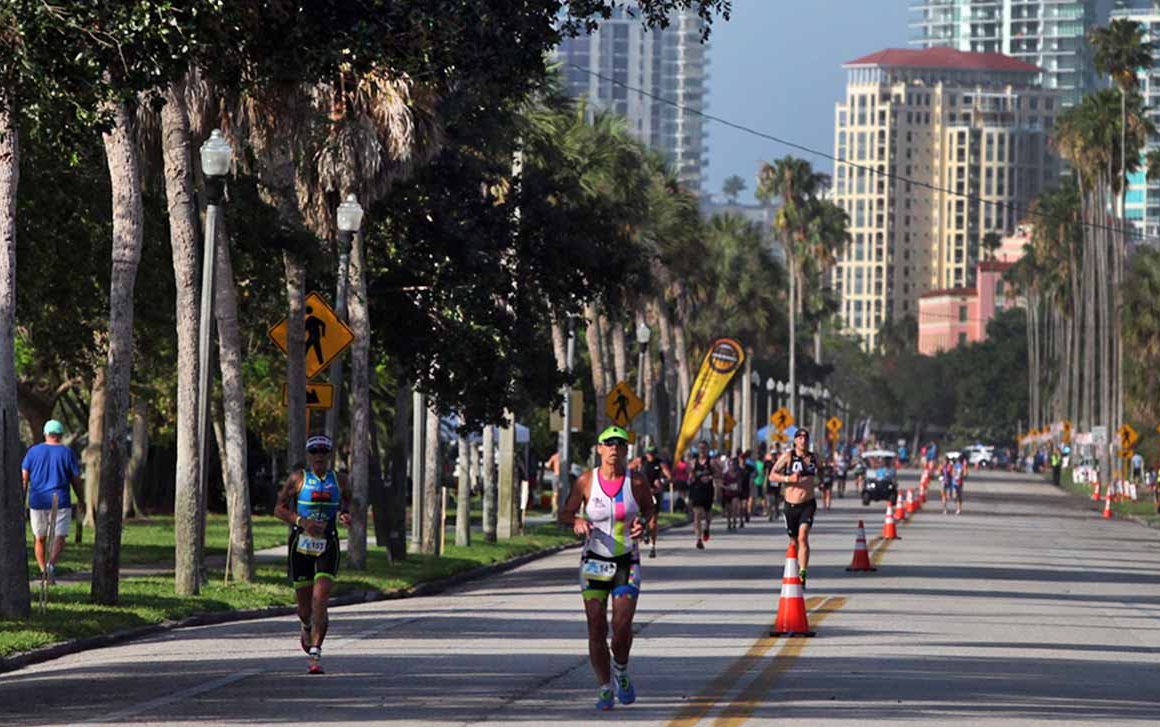 What triathlon athletes know – and many locals may not – is just how popular the St. Anthony’s Triathlon is among professional and novice competitors alike. People from all over the world love to come here for this USA Triathlon-sanctioned race, held the last weekend of April. Now in its 37th year, the St. Anthony’s Triathlon is considered one of the largest and longest-running events of its kind in the country.

Accolades listed on the website include: “one of the top-10 Great Destination Triathlons in the US,” and one of the “5 Bucket-List Olympic Distance Triathlons in North America.” In 2018, more than 3,000 athletes from 41 states and eight countries came to St. Pete to participate.

There are actually three distinct race events for different ages and abilities. There is the Olympic Triathlon (which includes a 1.5K open-water swim in Tampa Bay, a 40K bike, and 10K run in and around downtown St. Pete). The Sprint Triathlon is half the distance of the Olympic Triathlon, and the Meek and Mighty Triathlon is shorter still, and open to athletes as young as seven. Athletes can compete in the swim, bike, and run themselves, or they can be part of a team of people competing. 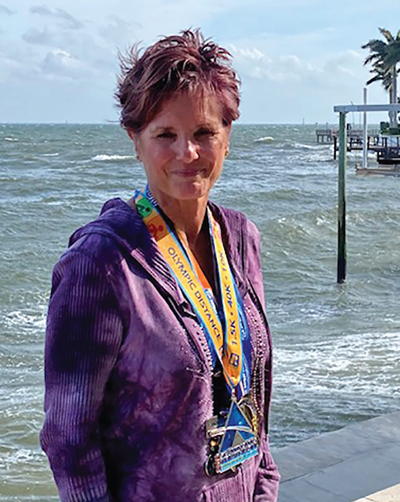 Donna Miller with her medals

Venetian Isles resident Donna Miller started as a casual participant in the Meek and Mighty in 2012, and then began increasing her competitive level each year, going from the Sprint distance in 2013, to Olympic distance in 2014. As her interest in races grew, she began training harder and improving her times. In 2019, she and a partner won the female grand master division in the St. Anthony’s Triathlon Olympic Duo Relay.

Donna has definitely caught the racing bug, though she says she is not out to beat the competition, per se. “It’s not about being the winner. Every time I cross that finish line, I feel like a winner,” says Donna, who has earned numerous medals from participating in races around the country. In fact, she has a bag of medals to show for her success. She intends on donating them to a charitable organization called Medals for Mettle (www.medals4mettle.org) where the medals are awarded to children and adults for the mettle and courage they demonstrate battling cancer, chronic illness, trauma, and other life challenges. 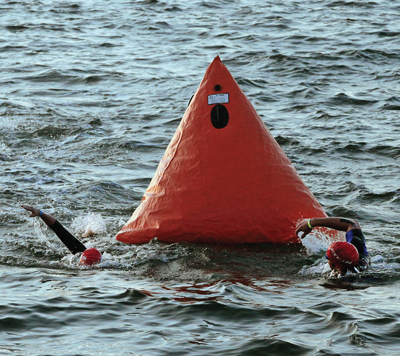 Donna swam competitively as a child, so it is ironic that now she must now overcome a “terrifying fear” of open water to compete in any race events featuring a swim element. “I swam the Escape From Fort DeSoto race in 2013 with my head out of the water the entire time,” she says. She described being panicky, and having to keep illogical thoughts out of her mind of sharks choosing her, instead of some other swimmer. Sometimes she trains with fellow athletes at the waterfront home of a local couple who host swimmer training in the wee hours of the morning.

The biking part of the race is now her favorite, even after overcoming challenges like the discovery that it’s possible to have not one, but two flat tires in a single race. Then there’s the issue of more gears to be mastered with the purchase of faster, more sophisticated bikes. Donna laughs heartily when she recalls that the first time she participated in the St. Anthony’s Meek and Mighty race, she rode what was originally her ‘mom’ bike, which sported a child seat.

Donna and her family relocated to St. Petersburg in 1996, where they purchased their home and raised their two daughters, Stephanie and Charly. Today, Donna and husband Chuck enjoy their beautiful waterfront home with the company of three rescue dogs, Missy, Roxy, and Mayday. Like their mom, Stephanie and Charly are sports enthusiasts. Stephanie is a member of the US Coast Guard and plays women’s hockey in Michigan. Charly competes in equestrian events. 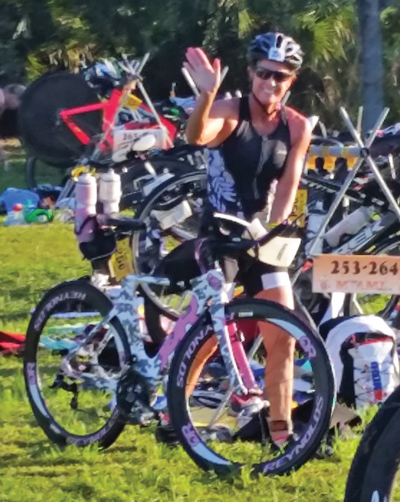 Donna Miller at the race

Last November, Charly invited her mom to a competition event at a horse farm near Trion, North Carolina. Thinking it was a triathlon, Donna agreed to participate. It turns out the event was a Spartan race, featuring 20 obstacles over four miles, including a ‘full immersion’ (which means head under water) in a muddy pit. Unfortunately, Donna suffered a torn rotator cuff and bicep muscle injury on one of the obstacles, forcing her to seek surgery when she returned to St. Petersburg. In a bit of good fortune, her race-training partner is married to the surgeon who performed the repairs. Donna is still recovering, but doing well, so she’s prepared to participate in this year’s St. Anthony’s race where she will compete in the women’s 55-59-year-old Sprint Triathlon.

Donna said she likes the St. Anthony’s race because it’s the most fun. She tells of how neighbors and friends gather along the route to offer support – and mimosas! The official break areas offer participants water or Gatorade as they pass, though some locals in Snell Isle offer slightly stronger options, including mimosas, margaritas, or beer.

When not racing or training, Donna works as a flight attendant for Delta airlines and has logged a gazillion miles in her 38 years with them. Incredibly, her success as an athlete has been achieved many years after a debilitating work-related accident. In 1992, Donna was riding in a flight crew shuttle in Detroit when a two-ton salt spreader plowed into the vehicle, shattering her right knee cap, severing her quadriceps muscle, and causing a compression fracture in her neck. She spent five years in physical therapy before returning to work. She was told she could walk, swim and bike, and that she should never run again. While the running portion of the races is her least favorite, Donna has shown perseverance and tenacity in her race career in spite of her previous injuries, completing the run portion at her own pace. In some races, the run is not a featured challenge, so they are known as ‘aqua bike’ events. Relay-style competitions allow participants to partner together and choose the events they each will complete. 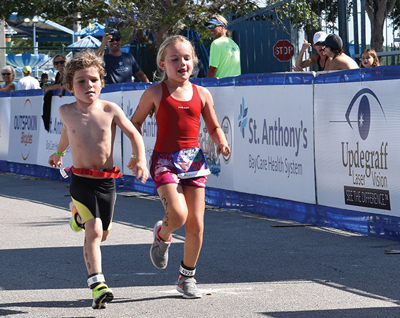 In addition to providing a competitive outlet for athletes and exciting entertainment for observers, the St. Anthony’s Triathlon generates a benefit to charity. This year’s proceeds will benefit Team in Training, The Leukemia and Lymphoma Society. Of course, the local community at large benefits from the thousands of visitors who support local businesses, from hotels to restaurants and retail shops. Volunteers are always welcome, and competitors who volunteer can earn a reduced entry fee. This year’s event will take place April 25-26 with Vinoy Park the starting point for all races. Each race awards winners in multiple classes, with divisions by age, ability, and gender. The professionals compete in the Olympic Triathlon for a top prize of $10,000 each to the fastest male and female.