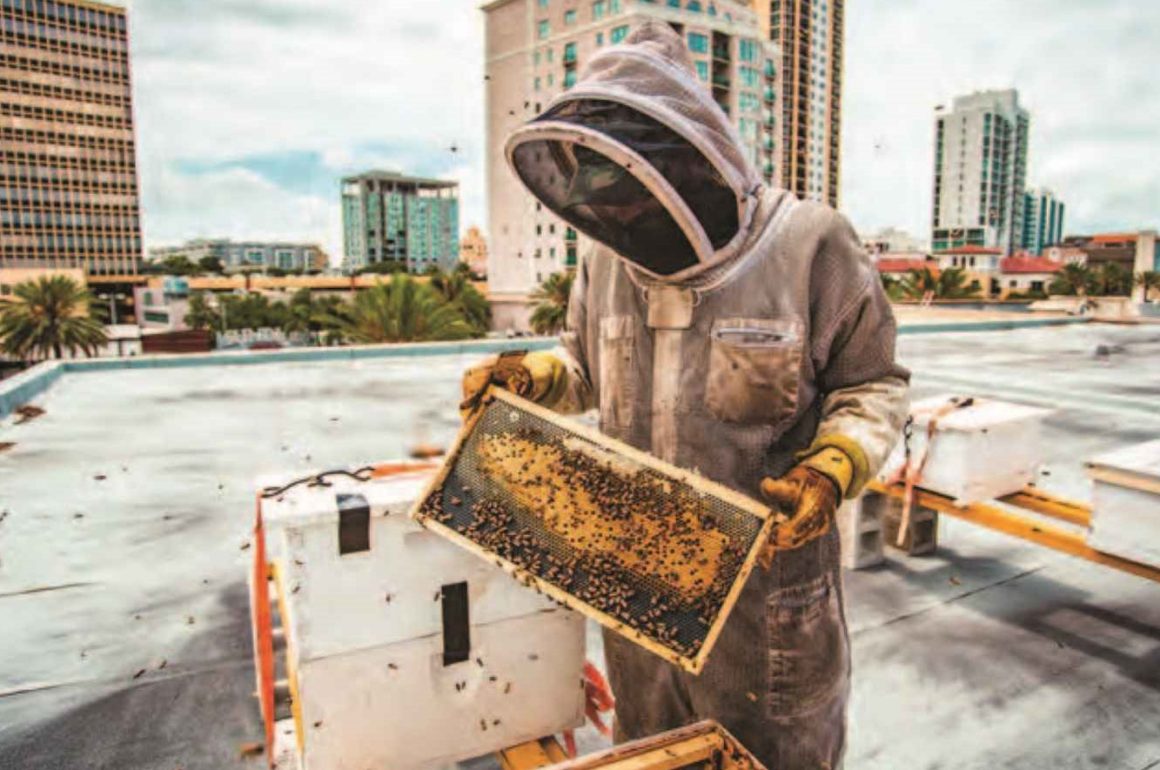 On a steamy Friday morning downtown, we were standing on the rooftop of the most unlikely of venues: the Museum of Fine Arts. The air was thick with tropical moisture and the sun was pounding us. Just a typical August day in Florida.

We had just climbed the 20-foot ladder to the top, and we were collectively awestruck, taking in a magnificent, million-dollar view of Tampa Bay, the boats at the St. Pete Yacht Club Marina, and the high-rise condos all around us.

While we were busy enjoying the view, Matt and Allison Davis of Noble Nectar brought our attention to why were there in the first place. Just across from us, on the rooftop of one of St. Pete’s most landmark museums, were eight small white boxes stacked on top of each other. Inside, were over 200,000 buzzing European honeybees.

A honeybee landed on Matt’s t-shirt. Most of us would panic, maybe swat it away, but Matt gently pulled on his shirt to give the bee a chance to fly away. Only a professional beekeeper could love bees this much.

Matt and Allison manage about 100 bee colonies in 12 different locations in the greater St. Petersburg area, including the colonies on the MFA rooftop. One of the reasons they love their job is knowing how important urban beekeeping is for the environment. Honeybee populations worldwide are dwindling, challenged by disease, mites, and many other factors. “It gives me a sense of satisfaction because I know we’re making a difference,” says Matt. 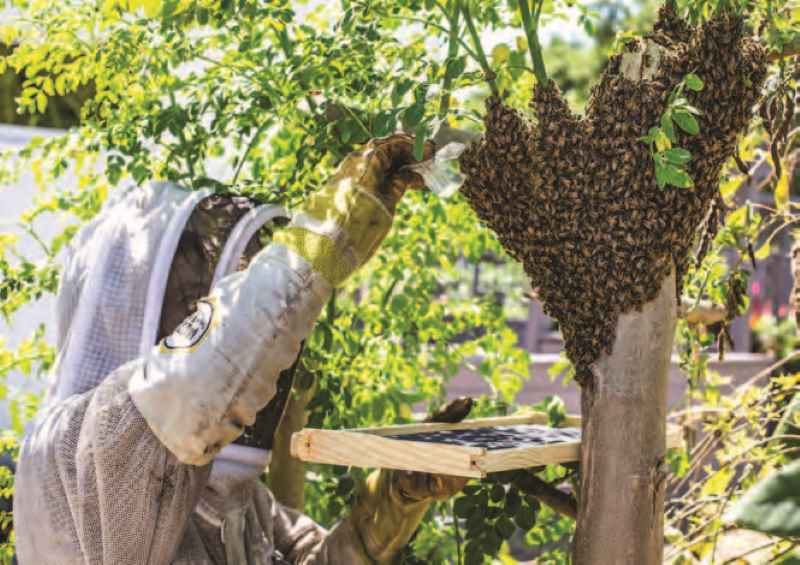 The couple’s primary focus is bee extraction –the process of collecting a feral colony of bees from trees on someone’s property, or from inside the walls of buildings, and then transporting them to a new safe place. Removal rather than extermination is their motto. They also sell the honey their bees produce, and even have a honey delivery service that Matt says hearkens back to the days when the milkman made home deliveries. 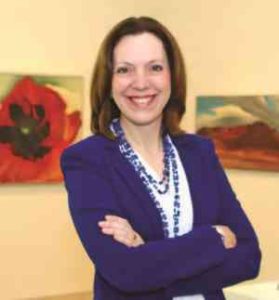 At some point in the future, the MFA hopes to sell its own honey in the museum gift shop, and to use it as an ingredient in some of the dishes on the restaurant menu. For now, the bees are just settling into their new home, after arriving at the museum this past spring. Julie Wilson, director of marketing and communications, gives credit to MFA executive director Kristen Shepherd for paving the way for the bees to move in.

The museum’s youngest executive director in its history, and the first woman, Kristen relocated from Los Angeles, where urban beekeeping is a popular hobby. And she thought the MFA’s large, flat rooftop would be perfect for an apiary. “It’s been a great adventure. We’ve received an overwhelming positive response,” says Kristen.

For anyone worried about encountering bees during a museum visit, Julie points out that the hives are inaccessible to anyone except the professional beekeepers. Besides, much of the colony is out every day searching for nectar and pollen, often flying for up to five miles from the hive as they forage. “One bee may visit about 5,000 flowers in a day,” says Matt. 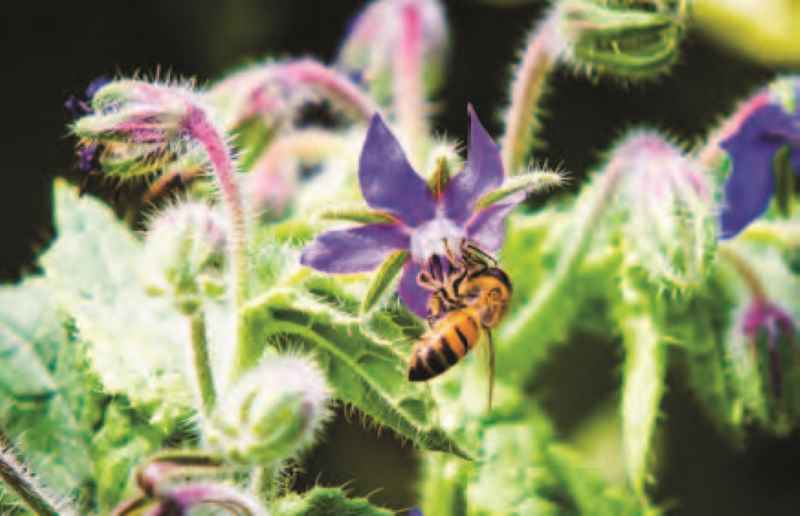 Honeybees can fly up to five miles foraging for pollen 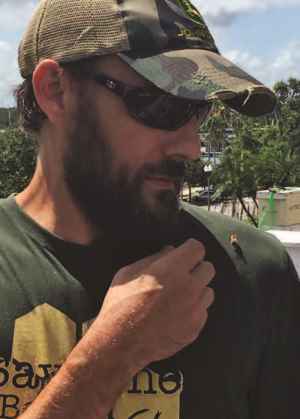 Matt Davis gently removes a bee from his shirt

Matt and Allison also inform us that European honeybees are actually very docile. “A lot of people are frightened about bees, but it’s a lack of understanding,” says Allison. “The bees are just doing their business and aren’t going to go out of their way to hurt you.” On the other hand, the bees’ safety is something the museum now has to consider as part of its emergency preparedness plan, especially related to the approach of a hurricane, says Julie. To keep the apiaries safe even in heavy wind, the boxes are strapped in place on the rooftop.

The Museum of Fine Arts isn’t the only well-known St. Pete landmark hosting a rooftop apiary. Green Bench Brewing Company has had two apiaries on its roof for the past four years. The popular microbrewery is known for its craft beer and cider, as well as mead, which is made with fermented honey. And yes, some of the local honey from the rooftop has been infused in small-batch special estate meads. Green Bench produced a few batches last year in the spring and fall, and this year in the spring.

Brian Wing has the fun title of Green Bench’s head mead maker. “Our bees don’t produce enough to meet the demand for our whole line of mead, but we love the idea of using locally sourced ingredients when we can,” says Brian. “Our Estate Mead is as local as it gets: St. Pete water, St. Pete honey and yeast. We label it so when you drink it, you can get the taste of flavor of St. Pete based on the date and season it’s made.” 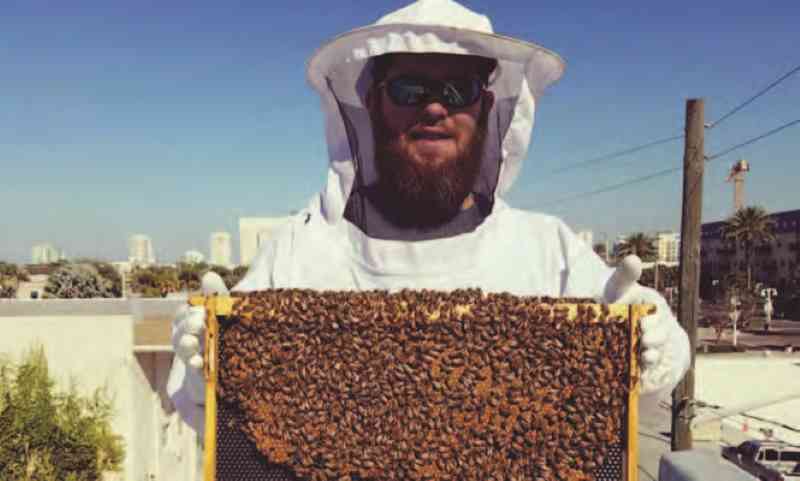 Luke Galloway is the Green Bench beekeeper. Beekeeping is a hobby; his full time job is with CSX Railroad. He’s also a mentor for a year-long beekeeping class at the University of South Florida Botanical Gardens. He says that local honey is darker in color with a more robust flavor. That’s due to the honey bee’s typical diet of wildflowers, mangrove, palmetto, and even the invasive Brazilian Pepper tree. 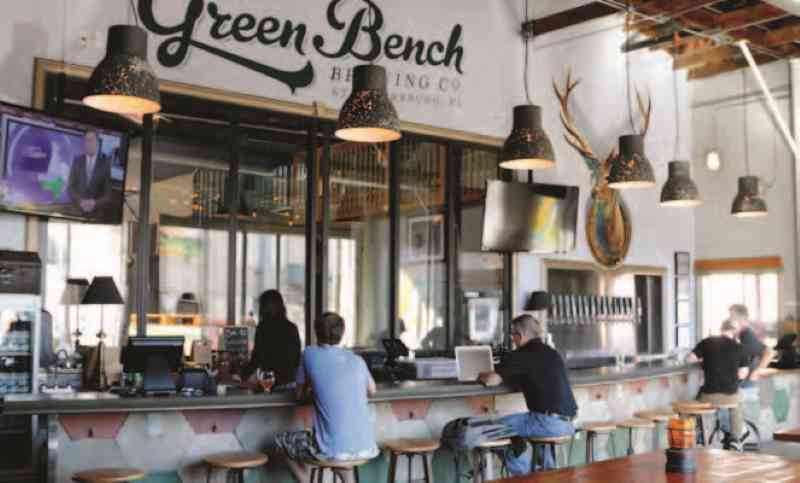 Luke told us that bees are organized within the colony according to their job. The queen bee is the largest female. Her sole purpose is to lay eggs to produce more bees. The worker bees are also female, and they rule the roost making all the decisions for the hive. But, they also do all of the work. They take care of the queen, nurse the young, keep the hive cool, forage for nectar and pollen, and guard the colony. Male 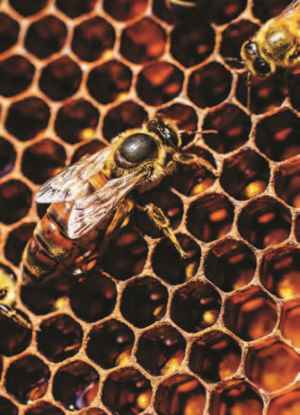 Worker bees drop the nectar into the
honeycomb

bees are called drones. Their job is to go out and mate with queens from other hives, but their lifespan is short; they die soon after mating.

Like Matt and Allison, Luke says honey bees are misunderstood and the decline in their population is a big concern. “Other than when they swarm, there is never an issue with safety,” says Luke. “And if you do see a swarm, call a professional to take care of it.” Swarming occurs when the hive gets overcrowded and the colony leaves to find a new home.

To make sure that doesn’t happen, Luke inspects the rooftop hives at Green Bench about twice a month. He harvests, or ‘extracts’ the honey about twice a year and can usually get about eight pounds of honey from one pound of bee wax. On average, hives produce about 40 pounds of honey annually.

I love the idea that both Green Bench Brewing Company and the Museum of Fine Arts have rooftop bee apiaries. That’s what makes St. Pete so special – one of the very cool things about living here in the Sunshine City.