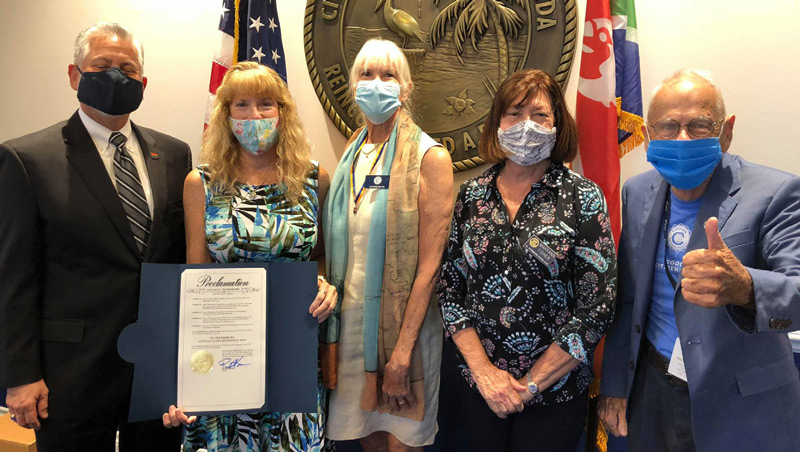 The first Civitan Club was formed in Birmingham, AL, in 1917, with St. Pete starting its own club four years later. The organization’s guiding principle is to build good citizenship through volunteering with an emphasis on helping people with developmental disabilities.

The St. Pete Club’s first project back in the 1920s involved city beautification. The club bought and placed a pair of swans in Mirror Lake. Also in the early days, the club raised funds and built an artesian well at 1st Street and 28th Avenue North. The well included a fountain and eight faucets for filling water jugs. Poor quality drinking water was a major concern back then, so having an artesian well was a great help to many citizens at the time. The fountain is still there, a reminder of St. Pete’s pioneer days. Behind that are historic 1925 Mediterranean style apartments that were once storefronts.

During the Depression, the club collected clothing and food for the needy, and in 1935, members purchased land in Indian Rocks Beach to build the Civitan Beach House. This past April, the facility was listed on the National Registry of Historic Places by the US National Park Service. A plaque unveiled during the 100th anniversary celebration in September will be placed permanently on the Beach House.

The St. Pete Civitan Club is now the largest in the state and is dedicated to raising funds to support Special Olympics Florida, the Civitan International Research Center (which focuses on interdisciplinary neurodevelopmental research), and PARC. PARC is a Pinellas County program that has been providing services, programs, and support to individuals with intellectual and developmental disabilities for over 65 years. In addition, the Club supports other local charitable organizations such as the Pinellas Education Foundation and the St. Petersburg College Foundation, and has sponsored the annual Fish-a-Thon with the St. Petersburg Parks & Rec Department since 1954.

Bonnie Ruth of the Old Northeast and MaryAnn Fisher of Shore Acres are both members of the St. Petersburg Civitan Club board of directors and have been fast friends for nearly two of the Civitan Club’s ten decades.

MaryAnn is retired from a 23-year career with PARC. She first learned about Civitan from her boss, the late Curt Thomas, former CEO of PARC. Thomas was the second president of the St. Pete Civitan Club and was later named president of Civitan International. “The missions of PARC and Civitan are closely related,” said MaryAnn. Both offer support to people who are developmentally disabled. She initially joined the ‘ladies’ group’ of the St. Petersburg Civitan Club in 1993. Then in 1995, the two clubs merged into one.

Bonnie’s introduction to Civitan came from a friend at church who was a retired army colonel. She officially joined the club in 2007. Bonnie is a third-generation Old Northeast resident whose grandparents moved to the neighborhood in 1929. Bonnie graduated from St. Petersburg High School, as did her mother. She and her husband Dave were missionaries in South America, where they founded several schools – ranging from preschool to high school – in Rio de Janeiro, Brazil and Lima, Peru. In 1992, Bonnie came back to St. Pete, moving into the home that had been her grandparents. She’s since moved into another house, but is still a proud resident of the Old Northeast.

Both MaryAnn and Bonnie are active volunteers in their work with St. Petersburg Civitan Club. MaryAnn is currently the secretary of the Civitan Foundation and Bonnie is a member on the club’s board. In addition, they have each served a one-year term as president, and Bonnie was treasurer for six years.

They are proud of Civitan’s support of PARC and Special Olympics, as well as many bowling tournaments, swimming, track-and-field, and golfing events for people with disabilities. The athletes who participate in these events “instill me with inspiration,” said MaryAnn. “They are big-hearted athletes and they love competition.”

It’s interesting to note that in the early days of the club, the regular twice-a-month club meetings took place at Orange Blossom on Fourth Street North. The old Orange Blossom Restaurant is no more, but Orange Blossom Catering is still going strong, so it was fitting that they were the vendor of choice at the 100th anniversary celebration.

For more information about the St. Petersburg Civitan Club, visit www.stpetecivitan.org. To learn about PARC, go to www.parc-fl.org.