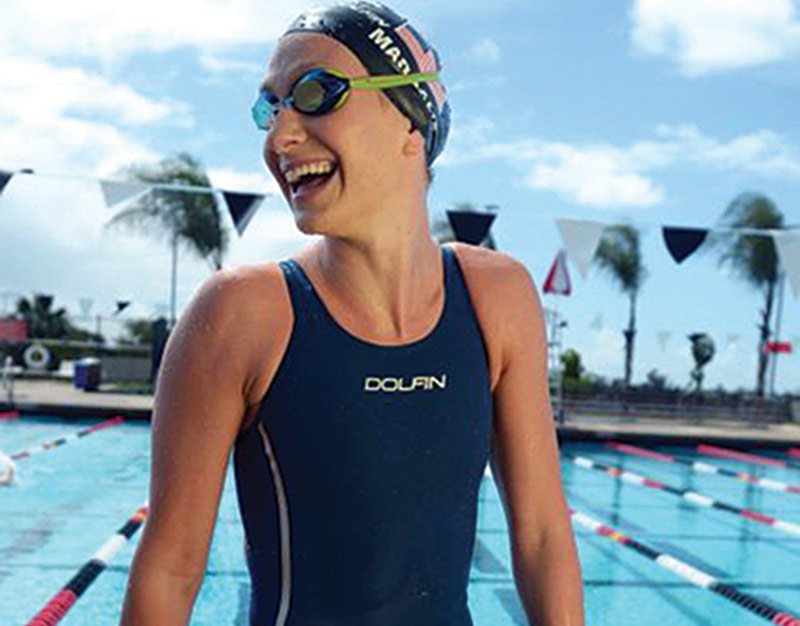 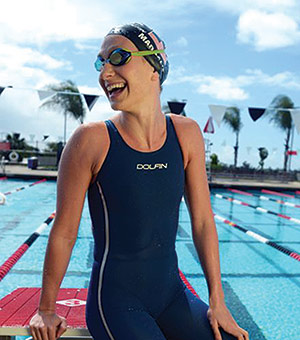 As a local swimmer, I often find myself bragging about our amazing pool at the Northshore Aquatic Complex. I regale out-of-towners with tales of the incredible talent our beautiful pool attracts, the international meets, the collegiate teams visiting each winter, and – my personal favorite – “I’m serious… Michael Phelps even swam in our pool!”

The Olympic-sized swimming pool has indeed accommodated training (and reigning) Olympians. Across from the front entrance are two bronze plaques honoring Brad Snyder and Nicole Haislett respectively, two prior champions.

Nicole Haislett won Olympic gold in Barcelona in the 1992 Summer Olympics (she is a three-time Olympic gold medalist) and is a former world record-holder with a historied past of collegiate and national championships.

Brad Snyder won gold in the 2012 Paralympic Games in London. Snyder is a true hero and inspiration – just look him up online and you’ll see what I mean. A former Navy lieutenant and specialist on the explosive ordinance disposal (EOD) unit, Snyder served in Afghanistan and was blinded by an IED while helping victims of another bombing. He holds the world record for 100-meter freestyle among fully blind swimmers. He has also won several medals at Prince Harry’s Warrior Games over the past few years. 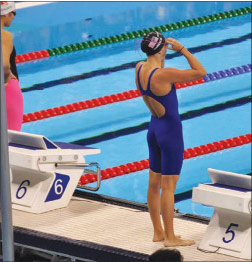 Now that the most recent games in Rio have come to a close, it’s time for another plaque at Northshore Pool. At this year’s Olympics, Melanie Margalis of Clearwater, who has trained at Northshore with the St. Petersburg Aquatics (SPA) since she was ten years old, brings home her first gold medal.

When I asked Melanie about the moment it sunk in that, after three Olympic trials, she had become an Olympian, she replied, “I still don’t think it has sunk in! I’m wondering when it actually will! It’s been weeks, and it still seems crazy that I’m an Olympian.”

Melanie won her gold in the women’s 4 x 200-meter freestyle relay. She had an incredible performance in her first Olympics also coming in 4th place in the women’s 200-meter individual medley.

Melanie has major kudos for her coaches, including SPA head coach, Fred Lewis. “Giving me confidence was the biggest things my coaches have done to help me get to this point. Swimming is such a mental sport, so all of their positive reinforcement has really helped me over the years.” 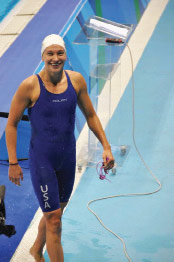 Though she started at a young age (10), Melanie didn’t compete seriously until high school when she pursued a swimming scholarship. She received one for the University of Georgia, where her swimming career started to flourish. She became a member of the USA Swimming National Team in 2013, following in her brother’s footsteps. Robert Margalis, who also trained with the SPA, had a high-ranking career in swimming, becoming a silver medalist at the Pan American Games in 2003 and 2004.

Besides Melanie, the SPA had several others competing at the Olympic qualifiers this year. Megan Romano has also been on the USA Swimming National Team in prior years and completed her third Olympic trials this year. She also trained at the University of Georgia.

It was the first Olympic qualifying meet for 20-year-old Calvin Bryant, who currently competes for Florida State University and has ranked among the top-10 swimmers at FSU for long-distance events (500-yard freestyle and 1650-yard freestyle). 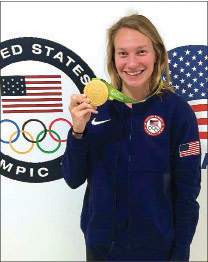 The experience can be overwhelming: high security on the pool deck, and recognizable prior Olympians in the next lane. On top of that, swimmers are kept separate from their parents and coaches. For first-time qualifier Robert (Bobby) Finke, only 16, it was a good thing he had some support in his fellow swimmers – two of whom were his older sisters.

Autumn Finke, who now trains at the University of Florida, competed in this year’s Olympic trials along with her younger sister, Summer Finke and their younger brother. It was a proud day for the Finke family – while SPA’s Coach Joe Finke, their father, watched from the stands.

Bobby grew up with his two older sisters acting as a pair of additional coaches, understandably. “He was really pounded on at practice,” chuckles Coach Lewis. Bobby smiles at the memory. The additional coaching seemed to work: Bobby is currently ranked one place (11th) behind Robert Margalis’ all-time records of 9th and 10th place in individual medley (IM), a combination race of the four swimming strokes (butterfly, backstroke, breaststroke, and freestyle).

Other Olympic qualifiers include newcomer Peyton Palsha, who is a high school sophomore like Bobby. Peyton’s bubbly demeanor on deck contrasts with her intensity in the water. She is a 2014-2015 USAS Scholastic All-American swimmer and multiple state finalist, and she recently took three first-place finishes at the 2016 Florida Swimming Short Course Senior Championships. 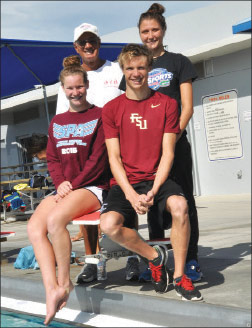 It takes real skill in coaching, discipline in the swimmers, and a carefully charted plan to nurture athletes like these. This year they even enlisted the help of a nutritionist. Says Coach Lewis: “We brought in a nutritionist for the team, and it makes a world of difference. The students started out with a blood test to see if they were deficient in any particular nutrients, and then they started on individual plans. The nutritionist counsels the parents and swimmers so everyone’s on the same page.”

Aside from long hours in the water, land-based cross-training includes 45 minutes of ab work three times a week, as well as strength training three times a week. Seemingly innocuous things like wearing a too-heavy backpack, or worse, only bearing a backpack’s weight on one shoulder, can cause fatigue and potential future injury. The coaches instill the importance of this into their swimmers throughout the school year.

When asked about their swimming idols and inspirations, both Bobby and Peyton name Robert Margalis, Melanie’s older brother. “He was here when we were little,” says Peyton. “We all looked up to him.”

Similarly, Northshore director Rebecca Hansen says the same about the next generation. “My kids are little and are just starting to swim with SPA, so they’re very excited to watch Melanie on TV.”

And so on it goes. St. Petersburg’s swimming tradition continues. Perhaps we’ll see plaques with more of these familiar names on them one day. These young swimmers certainly have visions of gold and the discipline to achieve them. Just one more thing for us locals to be proud of.