July 16, 2015by adminNEJNo CommentsAll, Spotlight on the Arts

Started Painting at 83 and Writing at 87 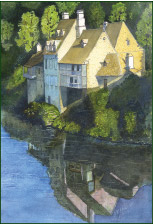 Joan Collins doesn’t look 87 – 72 seems more likely – but she does look like an artist. Today, she wears brown leather sandals, slate-blue Capri pants, and a periwinkle short-sleeved shirt that matches the hue of her lipstick and of her glass necklace. Compact spectacles frame her bright eyes, and her hair, a yin yang of white and gray, is worn short and stands a bit more than five feet above the ground.

Collins appears to have followed the artist’s way for much of her life. Yet she took it up only four years ago. At the time, Collins was a “basket case.” Her husband of 45 years recently had died of pancreatic cancer. “I was so lost and devastated,” she says. “I needed something to do.”

But Collins was also fulfilling a promise she made as a teenager: Someday, after retirement, she would learn how to paint.

Nursing was Collins’ career, and as with painting she turned upon that path relatively late in life. She entered nursing school at 49, graduated at 51, and retired at 72. Before that, Collins ran a gas station and drove a tow truck for her first husband, raised her seven children plus her second husband’s four, and dabbled in real estate. 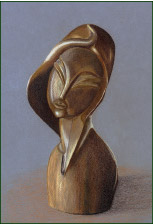 Collins’ first art instructor was Mary Sears of Zephyrhills. Every Wednesday, the recently widowed Collins would drive from her home in nearby Wesley Chapel to attend a class Sears held for cancer patients and their caregivers.

Collins was a good fit – everyone was started “on the same page” in pastels – and a quick study. Her first drawing, of two swans on water, bolstered the new art student’s confidence.

“They turned out so well I thought, gosh, this is pretty good,” she says.

Collins parents were artistic, if not artists. Her mother painted by numbers, and her father, a maestro with a pocket knife, transformed wood into miniature churches, a statue of a Madonna, and a model of the Taj Mahal.

Collins paints from photographs, not en plein air. The practice roots her in concrete images. “I like realistic paintings,” she says, “so you know what it is when you look at it.” Her muses include bright flowers, street scenes, and most anything that might jog memories in her or in those who view her work. For an artistic stretch, she’ll paint the reflection of a building cast upon the undulating surface of water.

After Collins moved to Northeast St. Petersburg in 2012, she began studying with local watercolorist Mary Henderson. The tutelage continues to this day.

“[Joan] is more determined than most, and really looks for the joy of painting,” says Henderson. “She is never afraid to jump into a large or complicated project.”

It’s in such projects that Collins transcends. Facing a naked piece of canvas or paper, not knowing where to apply the first paint dab or pencil stroke, is her greatest challenge; seeing what she’s labored to render emerge after many hours or days is her greatest reward.

Though Collins so far has sold only one painting, her art is award-winning. In local and district art shows sponsored by the St. Petersburg Woman’s Club, judges have hung upon her work blue ribbons for first place and best of show. At the 2015 Florida Federation of Women’s Clubs’ statewide competition, her painting of a brook placed second, and her pencil drawing of the Madonna carved by her father received an honorable mention.

In May 2015, Collins was granted her first public exhibition. For the entire month, a selection of her paintings and drawings – rendered in watercolors, acrylics, colored pencils and oils – hung from the walls inside Kahwa Cafe at 204 2nd Avenue South in St. Petersburg.

Collins assumed a nickname that both pays homage to a hero and bears her torch. Because she began painting at 76, the beloved American artist Anna Mary Robertson Moses became known as Grandma Moses. So Collins, who became an artist at 83, goes by ‘Gramma Moses #2.’

Time flies and thoughts blur when Collins creates. The act is both a reprieve from loneliness and a source of peace and satisfaction.

Even as age 90 draws near and her artistry matures, Collins has dreams to fulfil, self-promises to keep. Next up: She always said she would write a book like her mother did. So in May, in between sessions at her easel, she swapped her brush for a pen and started writing her life story. Its ending remains a blank canvas.