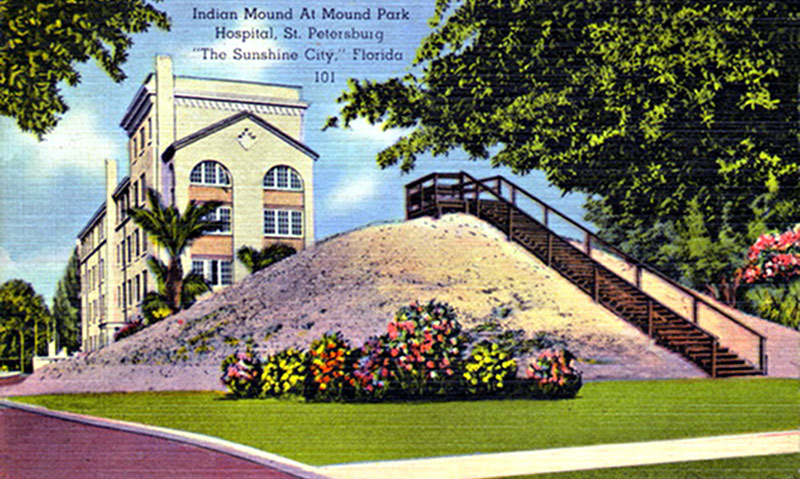 Before St. Petersburg was the Sunshine City, some early promoters tested a less beachy moniker: The City of Mounds. It might be surprising to learn that the area was dotted with Native American mounds of all sizes and shapes, most notably a complex of a least a dozen mounds close to the Tampa Bay shoreline around the vicinity of Booker Creek, Bayboro Harbor, and Mound Park Hospital, better known today as Bayfront Health St. Petersburg.

According to Robert J. Austin in an article published by the Florida Anthropological Society, the Shell Mound at Mound Park Hospital –  estimated to be about 20-25-feet tall with a diameter of 90-feet – was one of the most photographed mounds in Florida and a prominent tourist attraction for the growing City of St. Petersburg. In fact, at one time, there was even a staircase for visitors to climb to the top.

To get a sense of what the shell mounds might have looked like, take a short drive to the Pink Streets in South St. Pete and see what is left of the Pinellas Point Temple Mound. This prominent mound rises above the rooftops of nearby homes. It is also said to be the location of the fascinating tale of the explorer Juan Ortiz, who was sent to find his missing contemporary Panfilo de Narvaez. Distrusting of the Spanish, Tocobagan Chief Hirrihigua condemned Ortiz to death. His daughter, Princess Hirrihigua intervened, sparing Ortiz, setting off a series of close calls until Ortiz was rescued by Hernando de Soto. We can say these events literally happened in our backyards.

The story of the city’s mounds has been told and retold so often, to varying degrees of accuracy, that it’s hard to separate fact from legend, especially since nearly all of the mounds were leveled over the years, including the Shell Mound, which was demolished in the 1950s as part of a hospital expansion project. How the mounds came to be here and what they represented is still subject to the shifting sands of history.

Early settlers told wild stories of a society of extremely tall and docile people. “Tall” tales aside, we know that the mounds were the work of indigenous cultures that lived in the area starting as far back as 5,000-to-7,000 years ago. The Tocobaga, who were living here when Spanish explorers arrived in the 1500s, had been occupying the Tampa Bay area for around 1,000 years. Their villages stretched from Port Charlotte up to Pasco County.

Most of St. Petersburg’s shell middens were primarily composed of piles of discarded oyster shells (a main part of the Native American diet) and other byproducts of daily life. But some were burial sites or ceremonial temple sites. Unfortunately, before they could be examined, the majority of them were destroyed, their materials used to fill in the ruts from wagon wheels of horse-drawn carriages. Later, the shells served as fill material for city streets. No one gave much thought to preserving them until there were just a few left.

Fortunately, there are still a few remaining mounds that can be seen. In addition to the Pinellas Point Temple Mound Park, there are mounds at Abercrombie Park (Park Street and 38th Avenue North), Jungle Prada De Narvaez Park (Park Street and Elbow Lane North), and Maximo Park (Sunshine Skyway Lane South and Pinellas Point Drive South). The city’s park and recreation department preserves and maintains each of these sites. A few years ago, the city partnered with the University of South Florida to document the mounds using 3D survey technology. Go to www.stpeteparksrec.org/historicsites for a virtual tour and more information.

There are even remnants of a mound right here in the Old Northeast neighborhood. Behind the Renaissance Vinoy Hotel is Baywood Park, along Beach Drive between 6th and 7th Avenue. Look closely and the undulating land hints at the fact that what looks like a vacant lot is in fact, an historical site. Early accounts mention a “natural ravine” and a spring on the land that stretched all the way from Beach Drive to the water and includes the area that we know today as Vinoy Park.

Weedon Island is yet another area of historical interest. Today, Weedon Island is part of a 3,700-acre nature preserve on Old Tampa Bay. But between 1,000 and 1,800 years ago, it was the site of a flourishing Native American village with extensive shell middens and temple-mound formations. Portions of the preserve are now on the National Register of Historic Places. In 2011, an ancient dugout canoe dating back to between 690 and 1010 CE was excavated from the area. The canoe is on display in the Weedon Island Preserve Welcome Center.

But, not all of the artifacts found on Weedon Island artifacts have remained in St. Petersburg. In the early 1900s, archeologists from the Smithsonian Institute studied Weedon Island’s mounds and recovered the remains of over 400 Native Americans, along with ancient indigenous tools and pottery. In accordance with the practice of the time, these artifacts – including the remains – were boxed up and taken for study in Washington, DC. The vast majority of these remains are still in their custody.

Present day Florida Native Americans have been fighting a battle to recover the remains of those ancestors unearthed a century ago by archeologists. Efforts to repatriate the remains of America’s first people have been ongoing for a generation. The Seminole Indians in Florida found that the repatriation process was stacked against them for a few reasons. First, the Seminoles are a rare example of a tribe that never signed a treaty with the US. Second, the Seminoles are a mix of Creek Indians from Georgia and the Carolinas, runaway slaves, and any remaining descendants of the Tocobaga and other indigenous tribes. The US government denied the Seminoles cultural affiliation, which meant any artifacts from early Native American Indian culture could be held by the Smithsonian.

But, in keeping with their unconquered reputation, the Seminoles persevered. On October 5, 2020, after decades of pressure from the Seminoles and other tribes, the Smithsonian announced a major policy change and will accept requests to repatriate remains, even if they don’t fit the museum’s long-standing definition of “cultural affiliation.” With thousands of unaffiliated remains in their possession, it will still take time for remains collected by the Smithsonian at Weedon Island and other locations in Florida to make their way to their descendants. But there is a day within sight that these remains will be released from bureaucratic limbo to a burial consistent with their culture.

Whether the mounds were studied by archaeologists, shoveled into a muddy swale, or spread beneath red Augusta Block on city streets, St. Pete’s early indigenous residents are still making history.