January 15, 2019by Gary Smith3 CommentsAll, Spotlight on the Arts

Our beautiful city of St. Petersburg is becoming known as an eclectic artsy town, and our growing collection of urban murals is definitely adding to that image. Murals of all shapes, sizes, and styles are popping up overnight on the front, sides, back and even interiors of buildings. Seems like everyone wants a colorful piece of this unique form of street art on a storefront, restaurant, or bank.

John Collins, executive director of the St. Petersburg Arts Alliance – and one of our neighbors in the Old Northeast – tells me there are over 500 murals in St. Pete. That’s a surprising and impressive number! In the past, most of the murals were downtown. But more recently, they’ve been expanding into the 4th Street North and 9th Street North corridors where they’re adding a cool touch to our part of town.

John says that he’s “thrilled to see murals moving out from the central core as businesses see how mural art brings attention to their sites.” He gives the new mural on Pilot Bank as a perfect example. “While not directly advertising, it’s a great way for business and art to work together,” says John.

I couldn’t agree more. Every time a business owner commissions a new mural, we’ve made our city even more beautiful. The quality and beauty of the art is inspirational. So, just exactly where are these new murals? Here’s a quick guide to some of the murals that can be spotted on 4th and 9th.

Have you seen the stunning, south-facing colorful blue wall at 1507 4th Street North with the cute little girl blowing bubbles that turn into musical notes?  The mural is on the building at Music & Me, an early childhood music education experience for babies, toddlers and preschoolers. Artist Cecilia Lueza painted the mural for business owner Colleen Lilly who says she decided to commission Cecilia to do the mural “because her art is so beautiful.”

An old-fashioned pocket watch with an attached chain dresses up the side of building at 1131 4th Street North, the location of Hess Fine Art and Old Northeast Jewelers. “Aaron Tullo was our artist and he came to us, got the city code department to say yes, and then we worked on a rendering,” says business owner Katrina Hess. “Since we deal in vintage, the pocket watch was perfect. This is Aaron’s third mural and we are very pleased with it. We hope it spurs more people to utilize his talents.”

A dynamic mural of Ernest Hemingway and Salvador Dali – also painted by Aaron Tullo – graces the side of the Plotnick Law office at 1515 4th Street North. Then, traveling north, it’s hard to miss the mural on Pilot Bank, especially since it’s located at the busy intersection of 4th Street North and 22nd Avenue North. Artists Derek Donnelly and John Gascot created the stunning mural of a biplane flying over the city. The mural absolutely rocks it – quite a testament to St. Pete’s early history. The first commercial flight departed from the downtown waterfront in 1914, with Tony Jannus flying a Benoist airboat from St. Pete to Tampa.

Just a bit farther north at 2312 4th Street North is a new mural facing north on the wall of JWags, a popular local hangout. Cecilia did that one, too, in collaboration with the artist DAAS. Their painting of three birds – a cardinal, a blue jay, and a mockingbird is bright, colorful, and stunning.  You can’t miss it when you drive by.

Cecilia was born and studied art in Argentina, and now lives in St. Pete. She’s painted many of the murals in town, including the large geometric design that covers the intersection of Central Avenue and 5th Street North near Florida CraftArt. Cecilia told me she uses an acrylic water-based product to paint her murals. I asked if she drew the murals first in black-and-white and then colored them in. “No, I create an idea on my computer and then paint it on the building. It’s 90 percent spray paint, with the rest painted by hand.” By the way, Cecilia also painted the new mural on the side of the ONE luxury tower downtown. 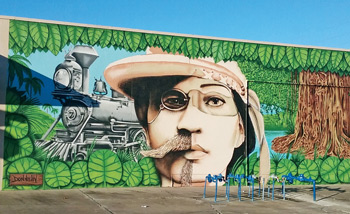 Jump up to 9th Street North and a mural of enormous, colorful tropical flowers cover the side of the Flower Centre at 2500 9th Street North. A short distance away, on the side of Cut-Ups hair salon in the 2600 block, mural artist Derek Donnelly has portrayed St. Pete ‘founding father’ Peter Demens, a Russian aristocrat whose Orange Belt Railway opened up this part of Florida to exploration. In an interesting twist, Donnelly transitions the right side of Demens’ face into a Native American woman – an artistic element that he says is an homage to the large Native American population that existed here for thousands of years before present-day history. The title of this piece? Angels and Demons.

There is one final mural story, and in my mind, perhaps the most amazing one. It’s the Northeast Water Reclamation treatment plants on 62nd Avenue NE near Canterbury School.  Tom Stovall – a local artist known for painting the tarpon at Bob Lee’s Tires on 4th Street North, and the Crescent Lake Water Tower – decided to tackle the job. Because of an issue with worker’s compensation, the city told Tom he couldn’t hire painters to assist him. So this 67-year-old guy who is a former actor and ballet dancer as well as artist, took on the job himself. This was a painting task that should be called the Sistine Chapel of water treatment plants. There are two giant water treatment tanks on the property, a total of some 130,000 square feet – about five football fields in size. Tom says it took 2,000 gallons of paint.

Tom Stovall stands on top of the water treatment tanks that he painted. (Edel Mohr, SPWTD)

“I flew out of the St Pete-Clearwater Airport, looked down and saw these bright blue, gum drop-shaped tanks from the air,” says Tom. “My thought was, it looks like a true wilderness. There’s a large coyote population, along with snakes, raccoons, and huge soft shell turtles. It’s all absolutely beautiful.  So I decided to add a coyote into my work.”

Writing this story made me humbled by the gifted artists in our city. St. Pete still has a lot of the small-town, quirky charm that it’s always had, but now I can see that we definitely deserve our new reputation as the Mural City.