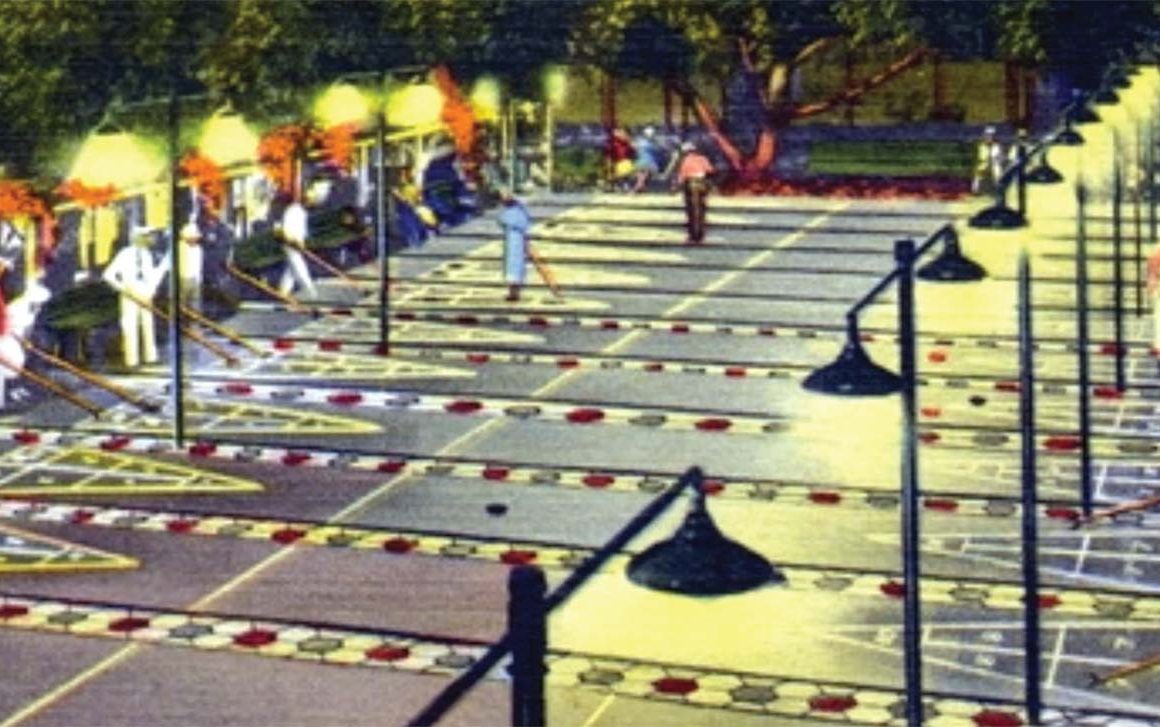 Seeing the St. Petersburg Shuffleboard Club trophy wall on Netflix feels like a glitch in the Matrix. Cindy Smith-Maglione, a Redington Beach resident and the former vice president of merchandising for Abercrombie & Fitch, gave an interview under the iconic white-and-green shuffleboard club sign in White Hot: The Rise & Fall of Abercrombie & Fitch on Netflix. It’s not just any documentary – it was one of the top shows on the streaming service.

Staff members at St. Pete Shuffle, as it’s known, say the club had no idea the documentary was filming there last summer; it was most likely a private rental in the clubhouse that flew under the radar among parties and events.

“We had no idea. They rented our space to film parts of a documentary film,” said St. Pete Shuffleboard Club Director Christine Page. “They blacked out the windows. The night it was released people were sending me screenshots, and there it was.”

Maybe it’s a fluke that Smith-Maglione chose to shoot her brief interview on Abercrombie’s work culture in the historic club – or maybe it’s a sign of the recent growth and notoriety of the historic club at 559 Mirror Lake Dr. N. Club officials think it may be a little of both – membership is on the rise, after all.

On any given Friday night, the St. Petersburg Shuffleboard Club is a lively place, lit up and filled with members – some just learning how to play, and some out for blood on the court. Zealous staff member Leela Gonzales attributes low membership costs, Covid-19, and the “bring your own beer” policy for the recent spike in players: 2,300 this year. She says many players live in downtown St. Pete or Old Northeast and travel short distances to the outdoor club. Typically, it’s less busy in the summer heat, but that hasn’t been the case since the pandemic began.

“People were looking to do things outside,” said Martha Reed, St. Pete Shuffleboard board member and chair of the sponsorship, fundraising and grants committee. “Membership is higher now than it was pre-Covid.” A membership costs $40 and grants year-round access to the club, or $70 for two adults and their children.

Gonzalez had no knowledge of shuffleboard prior to coming on as a staff member several years ago. She worked next door, at the St. Petersburg Bike Co-op, and naturally gravitated to the adjacent club. “Once Covid hit, I really had nothing else to do,” she said. “So I picked it up.”

Her and hundreds of others. While traditionally shuffleboard players have been an older set, the demographic is skewing much younger these days. Out of 2,300 members of the St. Petersburg Shuffleboard Club, 70% are under 50. “I think shuffleboard is kind of trendy now, kind of cool… you can bring a beer, hang out outside,” Gonzales said. “When I started, I wasn’t into it at all, but it kind of grows on you.”

How St. Pete Shuffle Came to Be

Stroll by St. Petersburg’s Mirror Lake and you’re bound to see a sign declaring that St. Pete Shuffle is the oldest and largest club in the world. That’s what drew in current director Christine Page, a lover of historical places, before she began volunteering in 2005.

“I love historic buildings, I always have,” Page said. “I drove past here many times before I went in. I read in the newspaper in 2005 that they were starting events on Friday nights. It struck me that I could get involved, and be a part of making sure this historic building is still here.”

Since she joined up nearly 20 years ago, Page has become an expert in the club’s history. Much of it is preserved in paper files in storage, and she sometimes hosts happy hour history talks using what she’s learned.

“The club sits on the north end of Mirror Lake,” Page said. “Since around 1910, that area has been designated for recreational use, park land, by the city.” According to Page, in 1924, six St. Petersburg men set out to build a shuffleboard club in Williams Park on 2nd Avenue N. However, the Williams family filed an injunction to keep the club from building there.

“The Williams family thought the park should be for everybody, not just private clubs,” Page said. “So, [shuffleboard] came to Mirror Lake instead.”

Despite the growth in recent years, shuffleboard is not nearly as commonplace as it was when the club was founded. It also was not an inclusive space. The green benches that still line the shuffleboard courts are a historic reminder of segregation in St. Pete. In the early 1900s, downtown was filled with green benches – colorful seats that tourists and locals enjoyed, as long as they were white.

“While no laws were implemented to restrict Black residents from enjoying the benches, it was custom that police officers would only permit the white community to use them,” reads the St. Petersburg green benches Wikipedia page. “However, Black caretakers were allowed to use the benches while accompanying white children.”

Nearly a century later, the green benches still remain at St. Pete’s shuffleboard club. “There has been talk of changing the bench color, but it’s a historic place,” Gonzales said. “I’m not sure about that, but I do know everyone and anyone is welcome here. We see all types of people, types of humans here, and that’s great.”

While the club continues to grow, Page and her staff are preparing the building for even more visitors – particularly international visitors – next year. In October 2023, the International Shuffleboard Association will host the 40th World Championship at the Mirror Lake Club. “It’s a huge deal,” Reed said. “People from all over the world are going to come here.”

Ready to play? Volunteers and staff are always present during operating hours, Tuesday through Thursday, 6-9 p.m., Friday, 7-10 pm, and Sunday, 9 am-12 pm. Find more at stpeteshuffle.com.