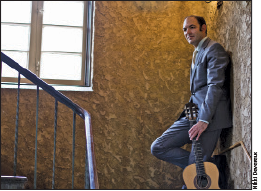 As a musician strings through the notes, we are pulled into the music. They begin to string us along like the notes they play. We float away to another place, soaking in the melody hitting our ears. As it kisses our ears, our feet begin to tap and our bodies begin to sway. We’re losing all thoughts, living in the moment and enjoying what we hear. While in the moment, we don’t think of how long the musician practiced, how many nights they may not have slept, how many years they have worked on their skill… we just enjoy the now.

Nate Najar calls himself “an orange.” Born and raised in St. Petersburg, he is a Florida native who strings the audience to a new moment. Nate is a musician in various capacities. Specializing in classical guitar, Nate is also a writer, composer, performer, engineer, has scored a documentary, and works in record production. His love for music began at a young age. Every Saturday, Nate and his brother would run into their parents’ room begging to go to Disney. Nate says that “back then – because now we are old – everything that happened at Disney, a live band was at every single show. You know, now you go to Disney and it’s either tracks, prerecorded, or a keyboard, but there is not a live band. Back in the day, there was a band. I usually couldn’t care less about the show, but I always watched the guitar and said, ‘wow, I want to do that.’” After begging for many years for a guitar, it finally came for Christmas one year. 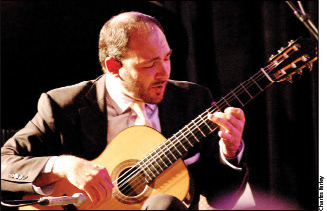 But Nate wasn’t a rock star the instant he picked up the guitar. Oh no, he just looked the part. Nate describes his first time in the spot light: “I remember my very first recital, I was terrible. It was so bad. I was wearing a polka-dot shirt. I had more hairspray in my hair than a 1980’s rock concert and I couldn’t play. I wasn’t practicing… I mean I would pick the thing up and screw around with it.”

It wasn’t until high school that Nate began to get serious with his music. Instead of just applying the hairspray, he applied the dedication to perfecting his craft. Growing up in St. Petersburg helped influence his musical career. “What is really nice is that we have a lot of really spectacular talent here in town,” Nate said. Having the ability to surround himself with such raw talent shaped his future. 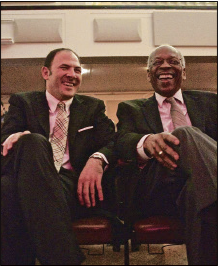 “I always say that John Lamb is the greatest thing that ever happened to me. John is one of the finest jazz bass players who has ever lived… John has lived here for quite some time. We became friends years ago. Having him here, spending time with him, listening and playing music with him was one of the best things that has ever happened to me.” Nate’s dear friend John, who was a member of the Duke Ellington Orchestra, is an American jazz bass player.

You are who you surround yourself with, and Nate sought to work with some of the best known in the industry. By seeking out talent he aimed to emulate, by and continuously practicing, Nate has become one of the best jazz guitarists around.

Ask Nate what the feeling is that he gets when he is playing and he responds, “I try very hard to not think at all when I’m playing. If you start thinking, you’re really in trouble because it takes you out of the moment. When you are having a good night, it is just very natural.” 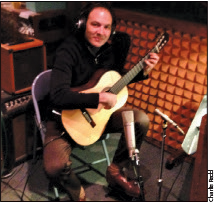 A musician’s work is his passion and he never stop working. He continues to put everything into his work. “Whatever it is that you do, do it to the highest level you can do it… and whatever you do, do it even better than that. It’s not about arrogance, being full of yourself, but rather really taking your time to do a good job. If you are playing music and you have a hard time executing things and you sound like crap, slow it down and practice.”

Taking Nate’s view on life, I believe there is something everyone can learn. When you give your all, dedicate yourself to your passion and live in the present, your life becomes a melody of its own. The work never stops, there is always more to be done. The key is to always keep playing.

Find Nate playing locally at the Mandarin Hide at 231 Central Avenue, the Palladium, as well as at The Independent in Tampa, in Sarasota and Clearwater Beach… and northward in North Carolina and Maryland… and internationally in London. Visit NateNajar.com for upcoming performances, to purchase a CD, or to contact Nate.

Ashleigh’s farewell: For the past year, I have gotten to meet so many wonderful and touching residents in the Old Northeast. Born and raised in Florida, I know the feeling of southern hospitality; St. Pete has that and more. The residents here bring something far more unique than any other town that I’ve lived in. The sense of dedication, love, care, and pride everyone takes in their community is warming.

When around town, I’d ask people what they love about the area. Every answer was different, but there was one common thread. It was the love glowing from everyone’s eyes. Everyone had a story to tell and a very beautiful approach to life. As I learned about you and your community, I also learned about myself.

Thank you to everyone who made me feel so welcomed during my time writing for the Journal. It was a pleasure working  with you and getting to know you. For the avid readers of the Journal, a huge thank you. You keep this paper alive, and we enjoy researching and telling everyone about the good place, good people, and good happenings.

My new journey has begun in the Big Apple. I know, you think I’m crazy for leaving behind the sunshine and warm weather, but a piece of me will forever be in Florida. To everyone, keep the true spirit of St. Petersburg alive. Share why you fell in love with the area and continue to help the community grow. It wouldn’t be the same without you.