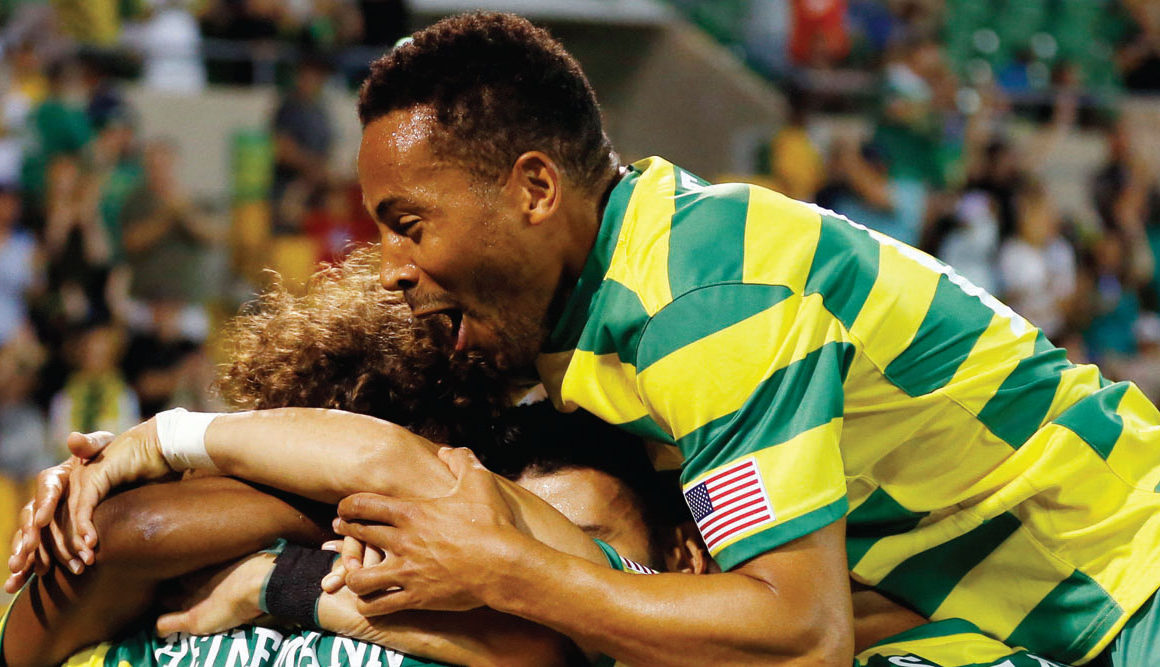 Rowdies center back Tam Mkandawire is our man! Meaning really ours… he lives in the Old Northeast! Tam and his family moved here from Tampa just a year ago. That was a small move compared to their trek across the pond – the Atlantic Ocean that is! And, there may be another leap for Tam and soccer fans in the not-too-distant future – more on that later!

The Mkandawires (pronounced makandaweary) hail from Great Britain. Tamika and his wife, Leah, met ten years ago in London. Tam was a star football player (or what Americans call a soccer player) with the Leyton Orient Club, and Leah was a commercial model for several well-known organizations, and then an assistant in the business development department at Christie’s, the well-known auction house. 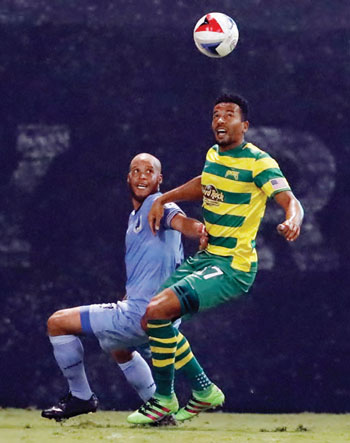 Tam Mkandawire is #17 for the Tampa Bay Rowdies

“I always wanted to play in the States,” Tam stated while reminiscing about the life-changing decision to leave their home country in 2014. “It was a hard decision to make,” he added, “but it was a once-in-a-lifetime opportunity and we jumped in head first!” Luckily, Leah loved the idea of living in the US, too. And, Mimi, their young daughter who was only months old, doesn’t have a shy bone in her body. She is known throughout the neighborhood for her outgoing personality.

Jumping in head-first is apparently a family trait for Tam. His British mother was the first ‘jumper,’ becoming a volunteer teacher in the African country of Malawi for nine years. His Malawian father came from a small farming village and attended an agricultural college. In 1984, when Tam was only three years old, they made the ‘leap’ from Africa to England settling in the town of Rugby (where the game was invented). But soccer – not rugby – won out for Tam.

Tam and Leah both had words of delight for their wedding venue in Hertfordshire. The Grove – an 18th century mansion with manicured acres turned luxury hotel – was the perfect venue. They had just purchased their first home in Shrewsbury, England when the opportunity to play for the Tampa Bay Rowdies popped up. Leah must have some jump-right-in genes, too, because she eagerly came along, even with the added work of Mimi, the lively toddler. “Leah is very organized,” noted Tam, “I couldn’t do any of this without her!”

But, just how did this soccer opportunity in the States come about? “Out of the blue, Rowdies general manager Perry Van der Beck, called me with an offer to play on the American team,” Tam noted with a happy smile. That offer was thanks to the recommendation of Stuart Campbell (Rowdies assistant coach at the time) who as a fellow Brit, played against Tam in England. British soccer players are making their mark in Tampa Bay!

Initially, in 2014, the Mkandawires lived in Tampa. “We arrived with work visas,” Tam said. “The first month was tough,” he added explaining, “We had no credit, no car, just hand luggage. We literally had to start our life from scratch and get a baby car seat, etc! The first day we were told by a concierge that a grocery store called Publix was just a short distance up the road. So, unknowingly, we embarked on a two-mile walk at midday on the 2nd of July! It’s safe to say a short distance means more than 100 yards and requires a car!”

But, they adapted and discovered St. Petersburg. “Now we love it,” exclaimed Tam. “We used to drive around Coffee Pot and Snell Isle and the waterfront” thinking this was where we wanted to be. In 2016, they bought a house in the Old Northeast and started renovating right away, even though Leah was expecting their second child, Remi. They did manage to move in before Remi was born, with the help of grandparents coming over from England in turns. “The neighborhood is great,” Tam stated, “everybody is friendly and we feel really safe and at home here.” He feels at home on the Rowdies, too.

He had the potential to become a professional rugby player at home in England since he was captain of his high school rugby team, as well as the soccer team. However, Tam’s love for soccer won out.

After switching to soccer, he started his career at Premier League team, West Bromwich Albion. In pursuit of first-team football (first 11 players in the game), as an ambitious 21-year-old, Tam captained Hereford United FC (Football Club or ‘team’) into League 2 and was awarded Player of the Year in 2005/06. Tam moved up to a bigger contract with a bigger team – Leyton Orient FC, then Millwall FC – and then to captain of our own Rowdies last year.

Now there’s a chance the Rowdies will move to Major League Soccer (MLS) in the near future. “We should know something for sure around November,” Tam revealed. Adding, “This is great for the Rowdies and St. Petersburg. It will make people more aware of soccer and the stadium. Bill (Edwards) is very motivated to build up soccer and the city of St. Petersburg.” Now Tam also has big plans for soccer in the area… another more-about-that-later teaser.

Tam is known for his love of playing the entire game – he played every minute of the whole 2015 season! “Soccer has always defined me,” declared Tam. “I’ve loved playing and captaining every team I’ve played for.” I was always a starter, so watching is not something I particularly enjoy.”

Recently however, Tam has been watching more and gaining a new perspective on the game of soccer. “I wanted to play soccer until age 40, but it’s rare to sign long-term contracts when you’re over 30,” he said. “I’m 34, so when the time comes I look forward to giving back.”

“What’s more important than playing every minute or being captain, is the team itself,” Tam reflected. “The biggest lesson I’ve learnt is that no matter your position or role within the team, whether you’re captain or just a squad player; everyone has an important role. In my youth it was hard to see the bigger picture, but it takes patience, persistence, and resilience to be successful.”

“I’m thinking about my longevity in the game – what about the future? Very few athletes are prepared for retirement. This year has really helped me – you’re not always in control and have to roll with the punches.” So, what’s next for a 30-plus-year-old soccer player?

“I’m motivated to helping youth soccer in America,” Tam pledged. “I want to use my experience playing professional soccer for a long time, to start a soccer school here.” Wow! Tam the Soccer Man will be Tam the Soccer Academy Man!

He and Leah both have their green cards now. “We have already set up an LLC,  and we expect to have the soccer academy operating in six months.” He has also acquired a soccer-coach qualification. “Everything is a mind set,” Tam reflected, “and mine is always positive.”

The academy (not an academic school) will enroll players after school and on weekends. In Tam’s words, the school “will help players improve individually and collectively. Besides strengthening and conditioning the players, it will also focus on the conditioning of pro athletes with specific drills.” 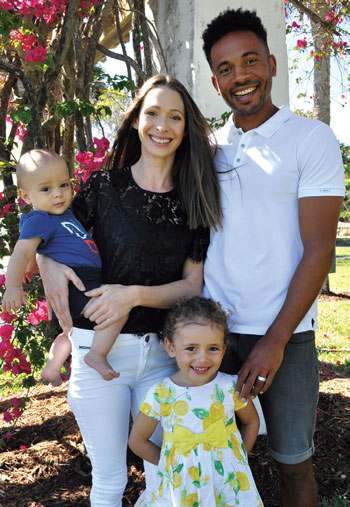 The whole mechanics of body and fitness will be the focus “which also means eating healthy – what you put in, you get out.”

“Tam is the food police,” laughed Leah. Even at home healthy eating is his main focus. But, Leah also has some admiring and prophetic words for her husband ‘the soccer man.’

“I remember the Millwall FC manager’s words to me and Tam’s mum” following an exciting game, recalled Leah: “‘Tam is a magnificent player but an even better person!” Leah can’t say enough that “Tam plays a big part in community. He will be a great mentor for sports and social issues. He is a good role model – he inspires me to be a better person!”

« Previous post
Through the Looking Glass: A Treasure Hunt
Next post »
Cruising the Seas & Settling in St. Pete