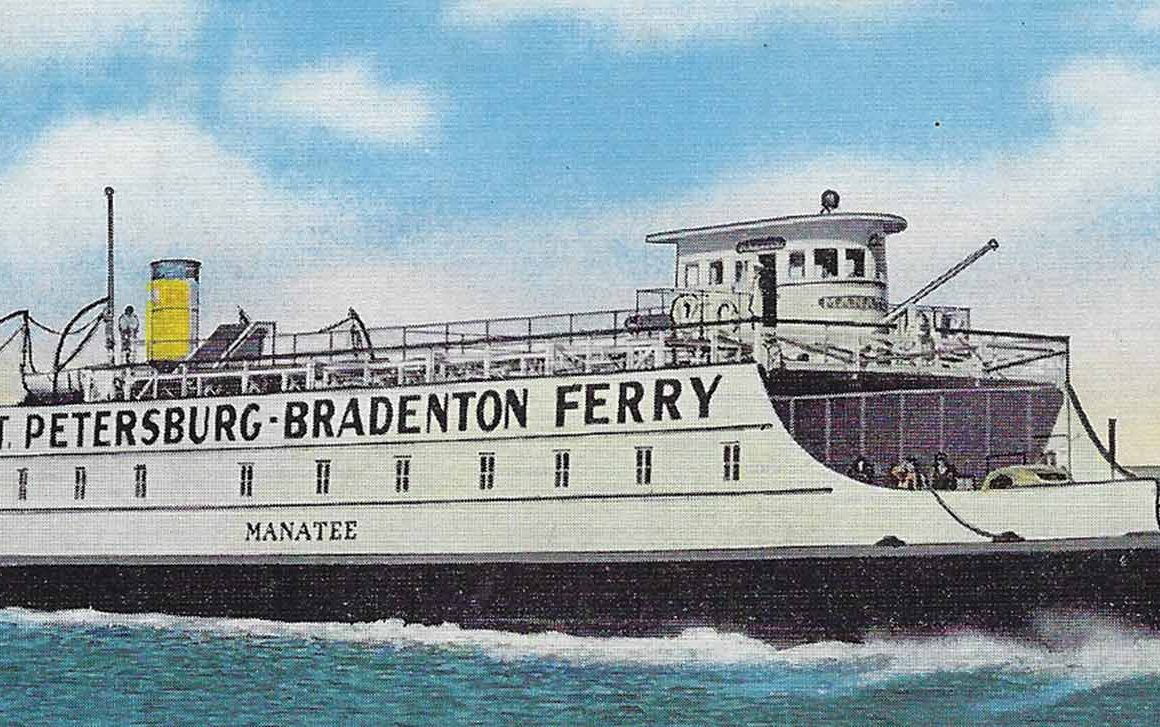 Much has been made of the success of the current ferry service operating between St. Petersburg and Tampa. But long before the current Cross-Bay Ferry, there was another ferry called the Bee Line Ferry.

St. Petersburg’s development has long been tied to transportation. Our city was the result of the Orange Belt Railway being enticed by local property owner John C. Williams to come to what is now St. Petersburg. Our early streetcar grid did much to expand the city beyond the downtown. In 1914, we experimented with an airline – the World’s first – between downtown St. Petersburg and downtown Tampa. (The airline still holds the record for getting between the two downtowns the fastest – 20 minutes.) 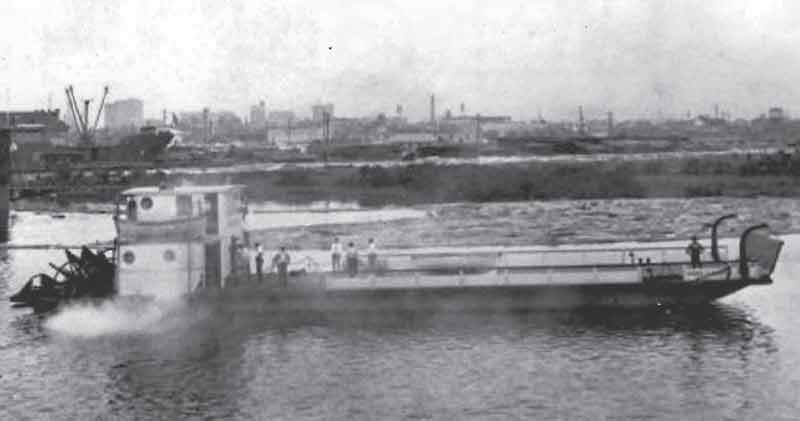 The Fred D. Doty was one of the first two ferries, and was built in Tampa. Note the paddleboard. Image 1925. Courtesy of Florida State Archives

George Gandy constructed the Gandy Bridge between St. Petersburg and Tampa in 1924, spanning five-and-three-quarters miles including the causeways, making it the longest automobile bridge in the world at the time. The bridge did much to stimulate development in north St. Pete, particularly along 4th Street.

But in South St. Pete we had the Bee Line Ferry rather than a bridge. Development there appears also to have gone hand-in-hand with the establishment of ferry transportation between St. Petersburg and Manatee County. Lakewood Estates began development in 1924, the same year the Bee Line Ferry Company was incorporated. Pinellas Point was begun in 1925, and Alta Marina – now known as Bahama Shores – commenced in 1926. The bottom dropped out of all development in St. Petersburg in 1927 as the city plunged into economic depression.

Getting into and out of St. Petersburg by car in the early 1920s was a challenge. Prior to 1927, most tourists arrived by boat or rail. But, beginning in 1927, for the first time, over 50 percent of tourists arrived by car. And as St. Petersburg was a tourist economy, it was doubly important that everything be done to facilitate auto traffic to the city. Even with the Gandy Bridge, north-south traffic was discouraged, as there was no way to continue on south through St. Petersburg. Two cross-Florida highways were built traversing the state – one from Palm Beach to Sarasota, and the other, the still-important Tamiami Trail which opened in 1928. Before the Gandy Bridge was built, it was a ninety-mile drive from Bradenton to St. Pete by way of Tampa. The Gandy clipped 30 miles off the trip, but still left 60 miles. So, what could be done to get the tourist traveling by auto to drive to St. Pete? Another bridge was one idea, but too difficult and expensive at the time to undertake. 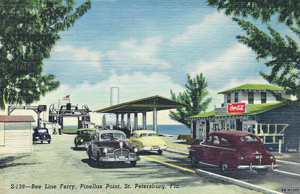 The Bee Line Ferry dock at the end of 4th
Street South, now the site of Bay Vista Park.
Remnants of the old ferry dock still may be seen.

Then there was the idea of a ferry, which originated with J.G. ‘Jim’ Foley – an early St. Pete realtor – and his business partner Charles R. Carter. In 1924, they joined with attorney James E. Bussey to create the Bee Line Ferry Company. The name presumably was taken from the idiom ‘making a bee line,’ which refers to taking the shortest route between two points. The first crossing – from what is now Bay Vista Park at the end of 4th Street South to Piney Point on the Palmetto-Bradenton side of the bay – took place on March 7, 1927.

Initially there were two ferries. The first was the Fred D. Doty, built in Tampa. Then the City of Wilmington ferrywas brought from Wilmington, North Carolina, and its name was later changed to the Pinellas. The trip took approximately 45 minutes, and five trips were made daily. A round trip cost $3.00 and passengers without an automobile paid 25 cents each way. The boat captains earned $1.15 per hour and deck hands made 65 cents. On opening day, an entourage of VIPs left St. Petersburg at 11 a.m. and arrived in Bradenton in less than two hours. Some 49 miles were clipped from the trip between Manatee County and St. Pete, and more importantly, the auto tourist could enjoy St. Petersburg and then move on to their next destination without having to double back.

Initially, the ferry was not profitable nor did its promoters expect it to be. Perhaps the most immediate effect of the new ferry was on real estate sales in South St. Petersburg. A typical ad read:

“A BEAUTY”
This new home, 5 rooms and a bath,
Near the Bee Line Ferry and
adjoining beautiful Alta Marina
[now Bahama Shores].
Furnished as a real home should be. Everything new.
Two blocks from Tampa Bay.
Owner called east. See this.
Only $7500. Fine Terms.
See Mr. Daily” 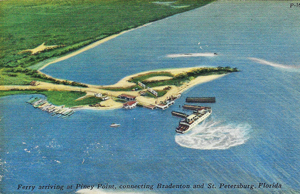 Piney Point, the southern terminal of the Bee
Line Ferry

In addition to the consideration of tourism, early ferry promoters also predicted a boon to farmers in Manatee County. As Manatee ferry board member Senator M.O. Harrison stated, “When the ferry line is in operation, it will add materially to the market for fruits, vegetables, and agricultural products… it will be possible for farmers to have their truckloads of provisions to St. Petersburg within an hour’s time after leaving the farms. The Bee Line Ferry, in providing a market for large quantities of our farm products, will, in so doing, provide an incentive for increased agricultural efforts.” These expectations for profitable farm produce transport were far overshadowed by the impact of tourism. With completion of the Tamiami Trail in 1928, tourism traffic began to generate a profit.

In 1932, a third ferry, the Manatee, was put into service replacing the Doty. The Sarasota was purchased and put into service in 1937. At that point, as many as 1,500 autos and their passengers were using the ferry daily. Ferries were then scheduled to depart every 30 minutes between 7:30 a.m. and 9:00 p.m. in the winter. In the summer, they departed every 45 minutes. Even so, at times traffic would be backed up on 4th Street South in St. Pete for hours as people waited to board.

1930s brochure extolling both the distance
saved by the ferry and the glories of the scenery
while making the short trip.

Perhaps the ferry riders were seeking more than efficient transportation. A 1930s ferry brochure – in addition to extolling the 11-mile distance by ferry between St. Pete and Bradenton – waxed eloquent about the “delightful short boat ride.” “Playful porpoise disport through the green waters, and beneath the surface can be seen great schools of fish. Overhead, hundreds of cat-calling sea gulls swoop and soar over the funnels of the ships begging for tidbits from the passengers.” The deck hands not only tended the ferry, but also doubled as tour guides. “Courteous officers and members of the crews will gladly name the birds or the various species of fish you espy. They know their fish.”

In 1929, the Florida Legislature granted the Bee Line Ferry a 50-year franchise covering a seven-mile-wide strip across the bay. The St. Petersburg Port Authority bought the franchise from the ferry in 1944 in order to build a bridge across the bay. The bridge was to be located in the strip owned by the ferry. The Port Authority also later bought and operated the ferries. The Bee Line Ferry finally ceased operations when the first Skyway Bridge opened in 1954.

As we go to press, we again hear of the return of the ferry. “4-Stop Ferry Link Proposed,” reads the Tampa Bay Times headline. A “new bold vision” is being presented for the Cross-Bay Ferry. Not only will it continue to operate between St. Petersburg and downtown Tampa, but it is hoped that the ferry will extend to MacDill Air Force Base and Gibsonton in South Hillsborough. Some 1,500 average daily riders are projected. While the proposed ferry service is just for passengers and not autos, history does rather repeat itself.

Sources: Karl H. Grismer, The Story of St. Petersburg (1948); St. Petersburg Times/Tampa Bay Times (various); Nevin B. Sitler & Richard N. Sitler, The Sunshine Skyway Bridge (2013); and thanks to Nevin Sitler of the St. Petersburg Museum of History for assisting in researching this article

« Previous post
‘Lady and the Bard’ in My Backyard
Next post »
The Racquet Club of St. Petersburg Turns 50