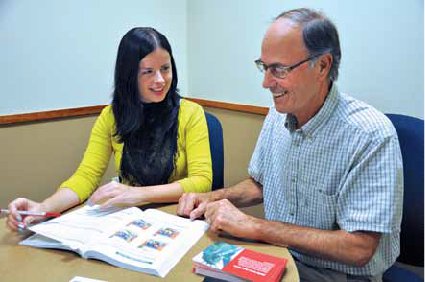 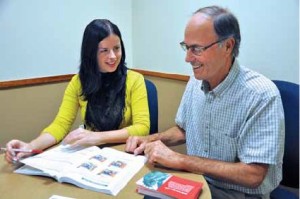 Barbara Wojciechowska improves her English by discussing topics of interest with John Gee.

The Melting Pot. That’s one of the things we as a nation are proud of… a fascinating tapestry of ethnicities, nationalities, and cultures. As the saying goes, “The whole is greater than the sum of its parts.” St. Petersburg is a microcosm of the country, boasting residents from around the world. According to the United States Census Bureau, 19.2% of Florida’s population was born in another country – compared to 12.8% nationally. 27% speak another language besides English – in contrast to 20.3% across the nation. Our new neighbors are eager to learn about their new home, contribute to the healthy growth of this city, and establish solid roots.

But that’s not always an easy task. What we native English speakers consider routine tasks can be daunting if one does not speak the language well.

John Gee, who also happens to be the astutely observant Journal Entry contributor for this publication, appreciates the language hurdle, and has been unselfishly volunteering his time to the English Language Learning (ELL) program for years now, at the Largo Library.

John’s experience is as colorful as the Hawaiian shirts he wears. He explains, “I pick up jobs that sound interesting… something that I don’t think I can do, and then I do it.” It is part challenge, part fun for John. Among the many hats he has worn is a firefighter paramedic. “That’s the one that really took a lot out of me,” he explains, “not because of the danger, but because you have to deal with a side of life that isn’t usually pleasant. It takes an emotional toll.”

His most recent job was as a middle school and high school history teacher at a private school in Sarasota. “I loved it! What’s not to love?” he asks. “You ever hang around those students? They’re a riot… a total delight! It’s wonderful!” Unfortunately, three years ago, with the recession in full swing, the school lost approximately 50% of its student body and was forced to let some of the teachers go. John and his wife took the opportunity to travel to Europe, around the globe, then moved to California briefly. They eventually returned to Florida, specifically to the Old Northeast. “I had time on my hands and I still wanted to teach,” he says.

So he got his certification as an English as a Second Language (ESL) instructor and taught a naturalization course at Pinellas Point Library helping immigrants pass the naturalization exam. “I really enjoyed that. It was a great experience,” he explains.

iving constant inquiries regarding English classes. “We were referring people to the upper Pinellas County and St. Pete Literacy Councils,” explains Nancy Coleman-Romanos, ELL Librarian and director of the library’s program. “Many who were living close to the library and couldn’t get around easily were looking for classes. There was so much demand for it – that’s what really got it started.” 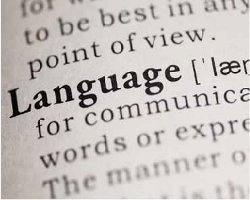 In 2011, the program really took off. Nancy says, “We wanted to be more structured in what we were doing, so we applied for and received accreditation through ProLiteracy, an international nonprofit organization advocating literacy in adult education, providing support for volunteer literacy programs all over the country. It enables us to offer a better program by looking at the management, student and tutor support services, and accountability.” Once a month, students do a self-assessment, identifying their goals as well as some of the challenges they have experienced. “This gives them a sense of accomplishment. It’s important that they see themselves improve.”

ELL at Largo Library has grown tremendously since then, and now services 50 to 60 students at any one time, with close to 75 students who actually go through the program over the course of a year. They currently have 40 active tutors, and a waiting list of 15-20 people. Coleman-Romanos’ goal for 2014 is tutor recruitment. “Every week I take in new people, interview them, give them a short placement test, and it just kills me to have to put them on a waiting list.”

Tutors come from all walks of life. Several former students are now tutors for the program themselves.

John found out about the ELL Program in Largo, and talked with Nancy Coleman-Romanos. He says, “They welcomed me in, and wouldn’t let me leave. So I thought, ‘This is the right place for me.’ I started teaching there.” 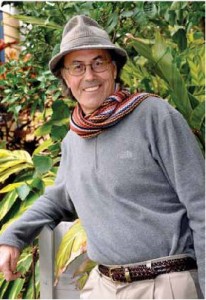 Gee emphasizes that there is a huge demand for tutors. “You don’t have to be an English teacher, or even a teacher. You just have to know the English language – you just have to be able to talk!” As a tutor, he determines his student’s level of under-standing, finds a starting point, and explains that the “willingness to learn” is a common ground among all students. “It’s an awful lot like being a psychologist… like therapy. I sit there, broach a subject, let them go, and help them through it. As long as they’re speaking English, I’m happy.”

He has many of his own stories. Mariana, his very first student, was from Poland. He recalls, “She was a lawyer, a highly-educated woman – driven. We got along really well. She came here, learned English, went to St. Petersburg College, and now has a job… all in 5 years.” As news of success is often transmitted by word of mouth, Mariana told all of her friends about John, so now he has two more of Mariana’s friends as students, Basha and Alexandra.

While the focus is conversation, he also works with them on grammar. John points out some of the subtleties of the Polish language. “They have no articles… no ‘an’ or ‘the,’” so they often question him, “Who needs it? It’s a waste!”

At Largo Library, the tutors are given training and a textbook to give them some structure if they do not have a background in ESL teaching, but the program encourages creativity. Nancy says, “Most bring in their own resources geared toward what the students are looking for. Some will take the student out to the movies, or shopping, or to a restaurant to give them practice ordering food. We let them do what they think is best for their student. Whatever they want to contribute is wonderful. If everyone is having fun doing it, it’s that much more beneficial.”

“Some students may simply be trying to get their driver’s license. Parents might want to talk to their children’s teachers at a parent-teacher conference, or be able to go to the doctor, all without a translator. Some might be getting their citizenship, or taking college courses. Everyone comes in with something different,” explains Nancy.

They have students from over 25 different countries: Poland, Albania, Serbia, Croatia, the Ukraine, Russia, the Americas, the Caribbean, Asia, and even French-speaking Canadians who come down for the winter. Nancy adds, “A lot of the students who come through have taken group classes, or have been enrolled in an adult education program, where they did not get a chance to talk very much. With their tutor, they get to focus on things that they’re trying to achieve. They feel privileged to have opportunity to work one-on-one with someone. It increases their confidence.”

The library has also started a conversation group facilitated by one or two tutors, giving students a venue where they can meet other students, practice their English in a relaxed setting. Nancy says, “It’s really good for people on the waiting list. With its success, the program is extending its session from one hour to two hours.” She notes, “They see that everyone there is learning, so even the people who were shy about speaking are more comfortable. They meet other people who know how they feel and can identify with their struggles.”

The bonds John establishes go beyond student and tutor. Volunteering has its unexpected rewards. John and his wife may be going to Basha’s wedding in Poland this summer. In the process of sharing his gift with a stranger, he received the gift of a new friendship. As poet Kahlil Gibran wrote, “You give but little when you give of your possessions. It is when you give of yourself that you truly give.”

For more information about the program, please contact Nancy Coleman-Romanos at the Largo Library: ncoleman@largo.com or call 727-587-6715 ext. 2547.