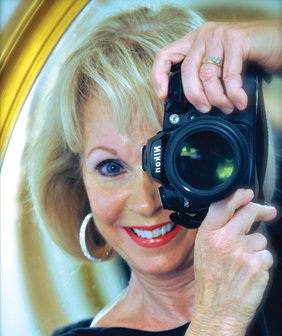 In Honor of Susan Woods Alderson
December 7, 1944 to November 10, 2016
Managing Editor and Photographer of
the Northeast Journal

How does one capture the spirit and life of the original ‘Original’ – that being the title of a new series of articles about St. Petersburg natives, invented by Susan Alderson? I wrote the first in the series for the November/December 2016 issue of the Journal.

As I was doing that interview with our first individual, Helen Dewalt, asking questions and furiously scribbling my notes, photographer Susan enthusiastically circled around us – nonstop clicking, up and down, right and left – except when she giggled with excitement each time Helen’s recollections reminded her of something she loved. Usually she was quietly in the background trying to be invisible in order to get the perfect shot; but for this article, she was so excited she could hardly contain herself. She and Helen shared reminiscences of stories, places, and activities. If only I had written down Susan’s memories.

I recall mumbling to myself: “Really, Susan is the perfect person for this article – I’ll have to do her next.” She was destined to be next, just not the way any of us imagined. And, of course she had the perfect shot – of herself with camera. 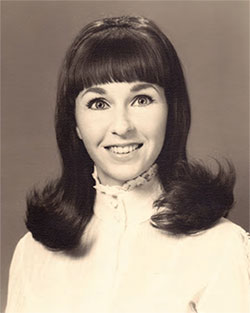 Susan’s daughter, Rebekah Lazaridis, who is a Tampa resident and also a writer for the Journal puts it best: “This neighborhood and city defined her.” The family is all thrilled about having Susan featured on the Originals page. As Rebekah explains, “She was so excited about that Originals page. I’m glad the Journal is giving her a highlight – she worked very hard for them for such a long time and I know it would rest her heart getting this kind of deserved attention.”

And, to Susan, I say: “I’m writing this article before deadline!” A first for me, but I am determined to truly honor Susan’s legacy. She was always very organized and ahead of schedule so the procrastinators like me probably drove her crazy.Yet, she was always very supportive of all the contributors, full of compliments, and full of polite reminders of the approaching deadline.

Susan and I were like twins – except she was the youngest (by four months) and the prettier – and we worked together as a team. So, this tribute is very difficult and emotional for me, but one that she so deserves. How I wish I could ask her to share her fondest memories of growing up and living almost her entire life in St. Petersburg. I can imagine how she would respond: sparkling eyes, ready smile, talking rapidly, and making suggestions for whomever the photographer was… maybe John Bailey? 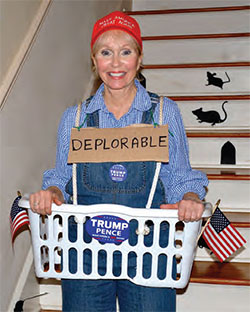 John willingly shared his remembrances of Susan: “How does one write about one who is adored, very creative, a true inspiration and co-conspirator? Susan Alderson was all of the above and more, the right person at the right time for this outstanding publication. She was truly the inspiration for most of the stories that I wrote. She accompanied me on just about all of them, helped rein in over-exuberance at times, helped with interviews, took world-class photographs to illustrate them. Yes, we developed all those stories together.

She was fun to work with and responsible for many enduring memories, like the ones that come to mind about the March 2009 story, Of Pelicans, Piers & Sailing Ships. She set up the interviews with Captain Robin Walbridge at the pier, master of the Bounty, along with Nina and Joe Piacenza who owned the bait shop that was located on the pier. It was full of whimsical moments that featured Henrietta the pelican begging for fish handouts; Robin refusing to pose behind the wheel of the tall ship – insisting that ‘captains never drive the ship… that’s for helmsmen’; Nina suddenly grabbing a pelican that got too close to a little girl; and Susan getting claustrophobic below deck on the Bounty.

Although the memories of that day are pleasant, three years later in October 2012, the Bounty sank off the coast of North Carolina during Hurricane Sandy. Only 14 of the 16 aboard were saved. Captain Walbridge was lost at sea, and a new crew member, Claudene Christian, was recovered, but had drowned. Ironically, her great-great-great-great-grandfather was Fletcher Christian, who was the leader of the mutineers of the original Bounty. 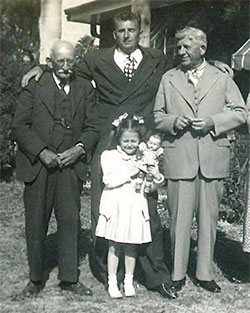 There are also memories of the time when we were ready to cast off for a ‘pirate adventure’ and were delayed because someone forgot to get hot dog buns when we were researching for Fire In The Hole!, published in May 2011. And why did we need hot dog buns? For the cannons! Hot dogs buns were needed, you see, to pack the explosive charge into the muzzle. Oh well, landlubbers don’t know these fine points of sailing aboard a pirate ship where the mission is to make noise and fire the hot dog buns toward the old pier all for fun. And who did the photography for this one? Not our photographer Susan, who sat as far away as she could get from the lively crew manning the cannons and covered her ears! For that story, consider that we indeed cast bread upon the waters of Tampa Bay.

Other fun stories also come to mind. The July 2007 edition featured a story about Debra and Gareth Eich, who enjoy restoring old Ford Model-A cars from the late-1920s in A Ride Back In Time. I had not driven a Model-A for over 50 years, and Susan and I literally had a blast, blowing the ‘ah-ooogah’ horn up and down Coffee Pot Boulevard.

For November 2008, Susan and I had A Chat With Jillian and learned about the history of the Chattaway Restaurant, and we took a ghost walk for Haints, A Woman Scorned, and other Ghost Tales, for September 2010.

What’s not to love about a horse-drawn romantic ride around the water district? Well, Susan and I did that, too. Some ‘romance’ – she was in the back seat taking photos and I in front, seated next to Leland Allenbrand, getting information for the story while Leland held the reins to his horse, Duke. It was a fun ride around the park… another interesting story for the May 2010 issue, Take a Ride with Duke.

For November 2010, Joan Priest on Snell Isle related a Christmas story with a tear in her eye. She recalled when her children were about age four or five, she and husband, Bill, always decorated the tree on Christmas Eve. ‘We wouldn’t let the children see it until we had it decorated. Then we made sure they had their hair combed and faces washed – they would come down the stairs and their eyes would light up as big as saucers when they saw the tree and all the presents.’ We called this story T’was The Night Before.” 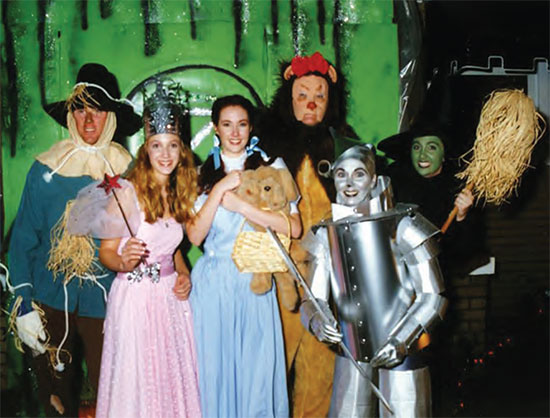 Susan’s family at one of their Halloween home productions. (Sean, Rachel, Rebekah, Ben, Susan, and Susanna.

I also checked the facts about Susan’s life with daughter Rebekah. Susan died just three weeks before her 72nd birthday (Pearl Harbor Day) here in St. Petersburg. She lived her whole life in the Old Northeast (except for a few years in Maryland) in four homes (16th, 18th and 19th Avenues). Her first five years were spent in the Wilhelm Funeral Home on 155 8th Street North, her grandparents’ business. Her grandfather, John Wilhelm, moved to Florida in the late 1800s and was a pioneer for the Tampa Bay area. He started his first business as an antique shop on the now-popular 600 block, and then started Wilhelm Funeral Home which thrived from the 1920s through the 1960s. He put all of his nine children through college during the Great Depression and housed his loyal employees. The home is currently called the Dupont Building, named after its architect who also designed the Vinoy and the Don Cesar hotels. Such a history makes Susan a true ‘Original’ for sure.

Susan and long-time husband, Ben, had four children: Sean Alderson (St. Petersburg), Susanna Alderson Patrick (Celebration, FL), Rebekah Eugenia Lazaridis (Tampa), and Rachel Woods Baynard (New York City). According to Rebekah, Ben and Susan were close friends who grew up together as children, and were devoted to each other all their lives.

Susan’s family willingly shared their thoughts for this article. “With a resolve comparable to General Patton, she never took ‘no’ for an answer and always told me ‘it never hurts to ask.’ I find myself repeating these two sayings over the last few weeks as a resolve that will stick with me for the rest of my days. I’m grateful for every single moment I had with her,” Rebekah affirmed.

Daughter Rachel agrees, adding: “Mom always had plans and was so active. Her fail-safe medicine for me anytime I was sick was to ‘drink a Coke and eat a banana.’ It always worked! We would write long emails to each other every day, and she would tell me in almost all of them that I was her sunshine. It meant so much to me, and it’s something I think about and try to emulate every day.”

Daughter Susanna had these thoughts to share: “Susan was exquisitely beautiful… inside and out. She radiated brightness and beauty wherever she went. She never took ‘no’ for an answer and packed quite a punch for being so vertically challenged. To know her was to absolutely adore her and I miss her every day.”

Susan’s husband, Ben, reminisced, “Susan loved the Journal with a devotion you will never replace. I supported her with enthusiasm and encouragement, knowing that whatever she did for the Journal was a key point in her life. What made her unique was the fact that she only spoke the positive. That, in and of itself, is a blessing.”

We were all blessed to have known Susan Woods Alderson. She epitomized the Journal’s slogan, “Good People ~ Good Places ~ Good things Happening.” And she truly will never be replaced.