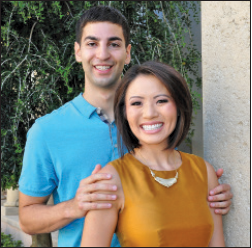 A few months later, in search of a permanent residence, Dion and Evan began exploring neighborhoods on both sides of the Bay. When they discovered the Old Northeast, they were instantly hooked.
“It’s exactly what we wanted in a neighborhood, and it’s the lifestyle we wanted,” Dion explains. “As soon as we moved in, we immediately bought bikes. We love the parks and waterfront and being so close to town.”

Evan chimes in, “Where we lived in Charlotte, the grocery store was 15 minutes away. This is definitely an improvement.”

Though Dion may be a fresh face in Tampa Bay news, she has achieved an impressive career trajectory in broadcasting. She began in Boston, where she and Evan first met, and moved to news stations in Kansas City and Charlotte along the way.

Dion was raised by very frugal parents and embraced the value of frugality early on in her career, as chronicled in her blog, Life During the Commercial Break. A strong work ethic, a healthy dose of humility, always staying grounded and focused, and embracing the joy of her work have all contributed to Dion’s success and her natural charm as a person. Her most recent promotion as an anchor for the 5pm, 6pm, and 11pm CBS Channel 10 News could not have come to a more deserving candidate.

When she announced the news of her promotion on her Facebook fan page, she wrote: “When I was a little girl, my mom made me watch 20/20 and listen to NPR to learn proper English…Cheers to a new chapter and adventure. It’s an honor to be here. Let’s do this.”

It’s quite an achievement for Dion: The Tampa Bay area is the largest news market in Florida. “It’s amazing,” Dion continues, “the people here are so wonderful, and working here is fantastic.”

Though often misunderstood, Evan’s career has been incredibly successful as well. He has been playing poker for over 10 years, supporting himself on his winnings and approaching the game through strategic and statistical lenses. “I’ll study the different opponents,” he explains, “and conduct research on the hands played during a game. I have a program that imports the hands dealt into a database after the fact, so I can study the stats, identify patterns, and learn from the players I’m faced with.” 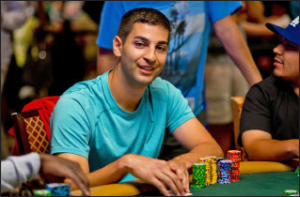 When asked about how family members view his career, Evan laughs. “There were definitely some concerned aunts and uncles early on.” Not only that, but Evan also presented his graph of winnings and statistical approaches to Dion’s parents when they first met, in an effort to explain how one can make a career out of it and achieve professional status. “You can consider lots of things gambling, even the stock market,” Evan says. “Unlike other casino table games, this is one of the only types of games you can actually win if you have a skill advantage over the other players. There’s so much strategy involved.”

The career in poker didn’t faze Dion. “As far as I was concerned, I had been dating a poet before Evan, so I think my parents figured this couldn’t be any worse than that.” 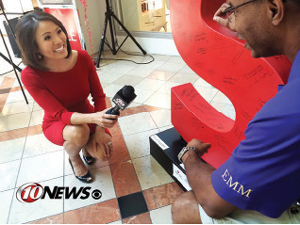 Their enjoyment of career balance and their new life in Florida is certainly indicative of hard work paying off. They have both displayed a fierce work ethic and sense of discipline in their respective careers – as well as a well-rounded perspective on the world and their industries.

“The landscape has changed. One day, TV will not be the main source of people’s news,” Dion says. “When I think about young people considering this as a career, I want them to understand that it’s not about being on TV. It’s about wanting to tell a story, learning about people’s lives, and staying curious about the world around them. I’d encourage them to be well-rounded and find their balance. Don’t think school is a direct link to success in the business.”

Evan demurs about young people following in his career path. “Poker increasingly gets tougher even though everyone thinks it’s easy. It’s hard to break in with so many amazing players at the top trying to beat each other.” Evan has coached people in the past, but he recommends that adopting poker as a career should be approached with care – and not as a first choice.

However, one perk of such a career is Evan’s ability to work virtually anywhere, though he has enjoyed being in St. Petersburg in particular, as it is close to professional poker tournaments all over the state. A second benefit is the ability to match his work hours with Dion’s, which enables the couple to spend more time together and enjoy the new city they call home. 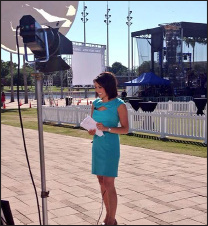 “We’re psyched about the market,” Dion exclaims when asked about other activities they enjoy. “We love to ride our bikes in the neighborhood and walk our dogs along the Bay. It’s so beautiful here.”
“We like the adventure of moving around,” Evan says, “but we’d really like to settle here.” Dion concurs. Whatever may come next, they both share dreams of being a part of our Old Northeast community for the long haul, becoming fixtures in this slice of paradise.

To visit Dion’s blog, visit lifeduringthecommercialbreak.com. For her fan page, go to www.facebook.com/pages/Dion-Lim/146674682074805.