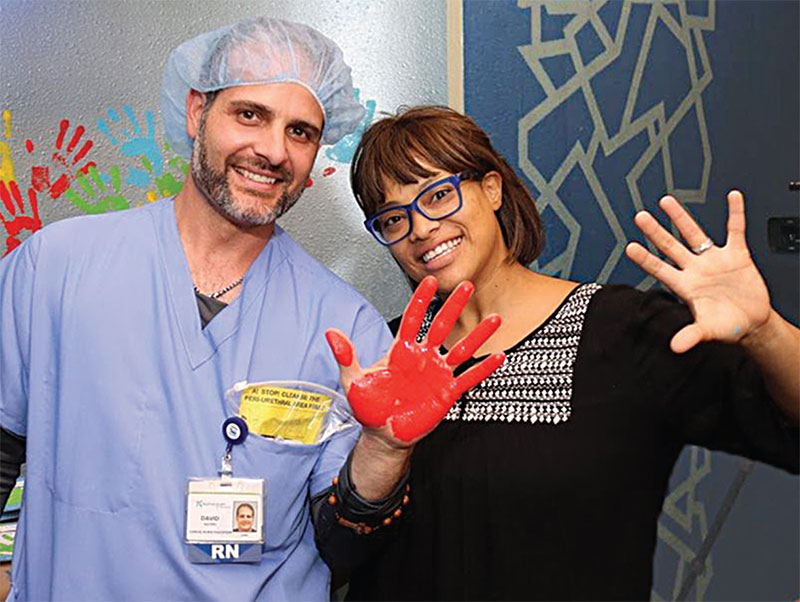 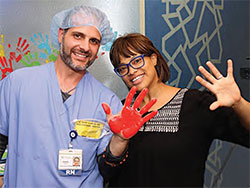 In a city with an amazing number of talented artists, Ya La’ford stands out. A visionary artist with a BFA in painting from Florida State and an MFA from the Art Institute of Boston, Ya is also a professor at St. Petersburg College and the University of Tampa.

But she has a law degree, too, from the University of Florida. In fact, she practiced law for a while in Washington D.C., mostly advocating on behalf of children and education, before her husband Victor encouraged her to pursue the passion she’s had for art since childhood.

While law and art might seem like career paths that are worlds apart, for Ya, they’re not. She’s passionate about community engagement and social justice, educating children and young adults, and understanding the human connection. These are the themes that are repeated continuously in her art, which is abstract, thought-provoking and full of geometric lines, shapes and patterns.

Transforming is definitely a word that comes to mind when you look at her paintings. “The energy that comes from art transforms a space and can electrify a community,” says Ya. “It’s all about having an impact and changing the space. The energy of the art works its magic and creates connectivity between the viewer and the artist. In effect, the viewer becomes the artist, too.”

If you’re not familiar with her art, here’s a short list. Behind the Morean Art Center just across from the glass hot shop, you’ll find Golden Wave, an enormous, 60-foot mural she completed for this year’s Shine Mural Festival. 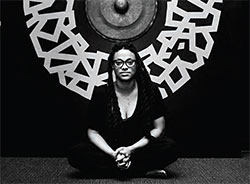 With its bold geometric pattern in gold metallic set against a black backdrop, Golden Wave is striking. It’s a favorite photo-op for people of all ages and backgrounds, from families to body builders and yoga practitioners. But, the mural is more than a cool design motif. It’s meant to symbolize community power, strength, and the quest for perfection.

All of Ya’s work has multiple layers of meaning. It’s not just art; it also tells a story.

“Integrating lines and patterns are a metaphor for humanity, and how we’re all entangled and come together despite our differences,” says Ya, who has a poetic way of expressing her thoughts. “We all face similar challenges even though we have different walks of life.”

Take the underground tunnel that leads from Central Avenue and Ferg’s Sports Bar to Tropicana Field for a Ray’s game and you’ll find another intriguing mural – the Blue SUNnel. That mural, which features silver rays on a blue background, is a metaphor for light at the end of the tunnel. “It’s about finding hope even in the darkest places,” says Ya.

She also has a mural at Bayfront Health St. Petersburg. Human Spirit incorporates handprints from nurses, doctors, trauma survivors, and caregivers and speaks to the healing power of art in helping patients move past pain toward recovery. The hospital commissioned her to paint the mural in recognition of National Trauma Survivor’s Day.

A Family of High-Achievers

Ya was born in the Bronx in New York City to a high-achieving family with parents who expected their kids to study hard. Her brother is an ophthalmologist; one sister is a lawyer, and another is a forensic anthropologist. 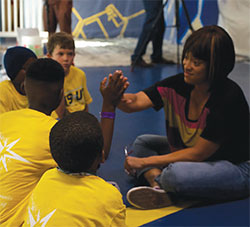 “My dad was an engineer who stressed math and science, and made sure his kids were strong in those subjects,” says Ya. “On Saturdays, my dad taught STEM classes to underprivileged children and he brought us along to teach with him. From him I learned to be an analytical thinker and a problem solver.”

Her father’s influence can be found throughout her art, which is “embedded with math and science through my use of geometric lines, shapes, and patterns,” says Ya.

Her mother was a second-grade teacher who encouraged Ya’s artistic streak. Art is a compulsion for me; I was born an artist,” says Ya. “From the time I was very young, my mother let me decorate her classroom. My parents let me color on the walls and do unorthodox things as a kid.”

A passion for art also runs in the family. Both of her parents are originally from Jamaica and now live in South Florida. Ya grew up spending time in the Bronx; Kingston, Jamaica; and the Miami area. Her grandfather, John Dunkley, is considered one of Jamaica’s most important historical artists. His work is currently on display at the Perez Museum in Miami.

From Art Collections to Public Art

While murals may give her the most visibility locally, Ya says initially she wasn’t so sure about being labeled a mural artist. “I had always seen myself as an installation artist,” says Ya. “My focus had been museums, libraries, and private collectors. My work is in collections held by Will Smith, the actor, and Maya Angelou. I am fortunate to have some unbelievable collectors.”

Yet at the same time, she feels strongly about taking her art ‘outside’ especially to reach a demographic that wasn’t being served. “A big part of my heart wants to share art with the community,” she says.

She has certainly shared her heart with the St. Pete community. She’s especially proud to be working on public art projects with students at Mt. Zion Christian Academy and MycroSchool Pinellas High School, a public charter high school with a focus on drop-out prevention. Students from the MycroSchool helped her create a mural honoring Martin Luther King, Jr. It’s located on the side of the Dr. Carter G. Woodson African American Museum in South St. Pete. 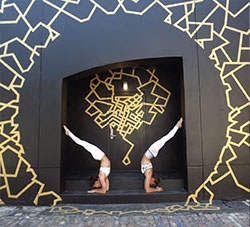 She also partnered with the Tampa Bay Rays and kids from Big Brothers Big Sisters to create Pitching Promises, an art installation at gate six inside Tropicana Field. Ya had the kids dip a sponge baseball in paint and ‘pitch’ it at the installation while they shouted a promise that they had selected, such as being truthful, successful, hardworking, or staying in school and graduating.

As a visionary artist and community activist, Ya says giving back to the community and creating a legacy that lives long after she’s gone is something that has always interested her.

“People have different ways of having an impact,” says Ya. “I don’t need to plant a forest. I just find a small pocket, plant a seed, and watch it grow and flourish.”

This year she expects to be making an impact of an entirely different sort. She and her husband Victor are in the process of adopting a child – possibly twins. It’s a life-changing decision. The two say they are looking forward to it.