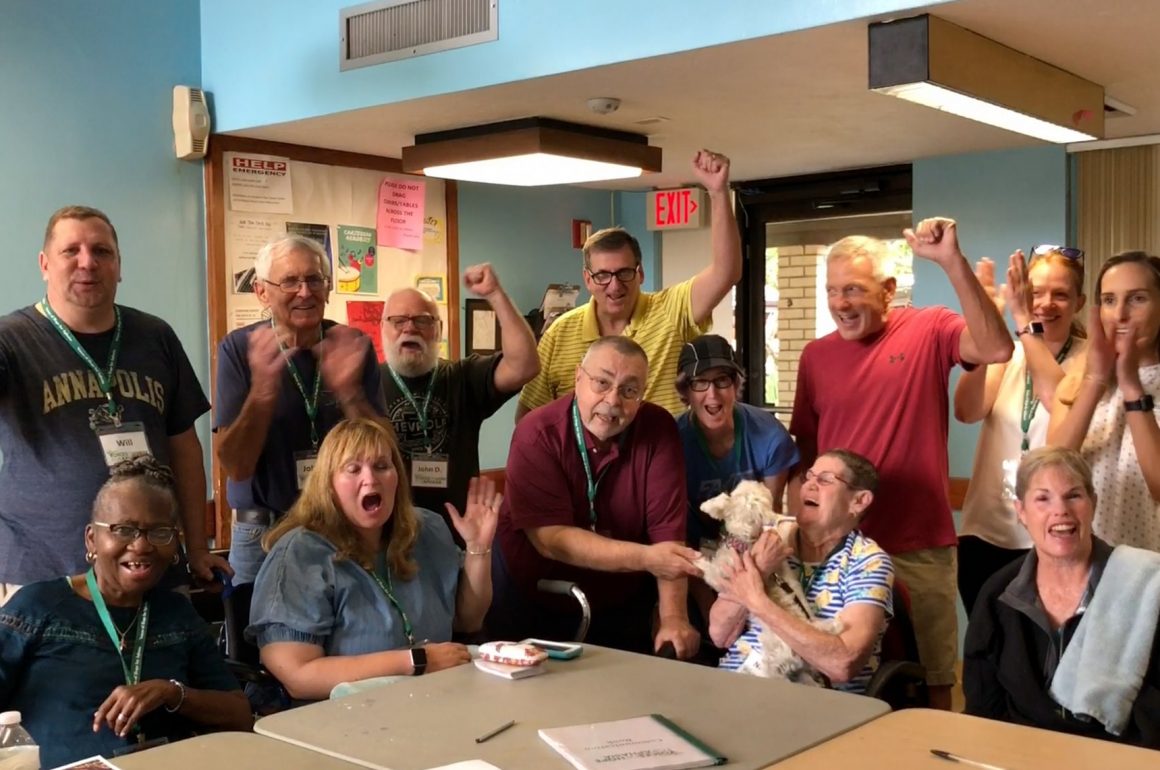 It is estimated that the number of people living with aphasia in Tampa Bay could populate the entire Old Northeast Neighborhood. “If you add all the family and friends, and other people impacted by the person they know who has aphasia, that would extend the number of people affected by aphasia to all the surrounding neighborhoods and then some,” says Debbie Yones, executive director of Voices of Hope for Aphasia in St. Petersburg.

Until celebrities like actor Bruce Willis and politician Gabby Giffords went public with their diagnoses of aphasia, perhaps few Americans outside of the aphasia community had even heard of the condition, much less knew about its impacts. Aphasia is defined by the National Institute of Health as “a neurological disorder caused by damage to the portions of the brain that are responsible for language production or processing.”

The main cause of aphasia is stroke, but it can also arise from a head injury as well as brain tumors or disease. The onset is usually sudden – individuals could wake up in the hospital to find that, although their intellect is completely intact, their ability to communicate has been short-circuited. The words they try to say come out wrong and sometimes the words they are hearing don’t make sense either. It’s as if they have been dropped in a foreign country where they have no idea how to speak the native language, and no one there knows how to speak theirs. It is an alarming affliction of instant isolation.

Aphasia manifests as an equal-opportunity language impairment since it does not discriminate based on ethnicity, gender, or socio-economic status; and more and more young people are being affected. It’s not just an elder infirmity anymore.

Once speech therapy has reached its conclusion (usually after only a few months, based on insurance parameters), people suffering from aphasia have limited resources to facilitate their communication recovery further. Iterations in how aphasia expresses itself are as individual and varied as the people who have it and can range from severe (no ability to speak) to mild (occasional difficulty in thinking of a word). People living with aphasia need rehabilitation, community programs and long-term support for an opportunity to improve. That’s why, 10 years ago, a group of people came together locally with the vision of “improving the lives of people with aphasia and their loved ones.”

That group is St. Petersburg non-profit Voices of Hope for Aphasia (VOHA). The organization’s mission statement is to “reconnect people living with aphasia with their lives through innovative programs.” Founders Mike and Kathy Caputo originally came to Florida from New Jersey in 2011 for a course of intensive aphasia therapy after Mike had suffered a stroke two years early, at the age of 51. They had exhausted traditional physical, occupational, and speech therapy options. Debbie Yones was Mike’s intensive aphasia therapist in St. Pete, and along with a solid board of directors, they got VOHA off the ground in 2012.

In 2014 Dr. Jackie Hinckley joined VOHA as its first executive director when the group was meeting in a spare room of a local church. By 2015 the group’s programming had expanded to include Fridays at the University of South Florida – St. Petersburg, and Mondays and Wednesdays at the Sunshine Center. Yones became VOHA’s executive director in 2019, and navigated the group through the challenges of the pandemic in 2020 and 2021 with virtual programming. In 2021 VOHA opened its first official home in Gaslight Square in St. Petersburg. Additional satellite locations are at Good Shepherd Lutheran Church in Tampa and Hale Senior Center in Dunedin. The organization has developed into a community of over 500 people served since its inception.

Today programs are available both in person and online, Monday through Friday. In addition to interactive programs designed to engage those living with aphasia, the organization sponsors day trips to museums, and sports and theatrical venues. Family and friends are invited to participate in workshops, excursions, and First Friday Lunch outings to encourage community engagement.

Brooke Oliver, a resident of the Old Northeast, started as a volunteer with VOHA in 2015. Six months later Oliver became the organization’s first program assistant, responsible for St. Petersburg, Dunedin, and online programs. Oliver changed her grad school focus in speech pathology at U.S.F. from kids to adults after her exposure to those living with aphasia. “I came to Voices of Hope and never left,” said Oliver.

People at VOHA may have had aphasia for a few months or as long as 20 years, but Oliver says they can still live fulfilling lives. “The people are amazing; they motivate each other to improve,” said Oliver. “When they get discouraged, they lift one another other up.”

Oliver explains that her days as program assistant at VOHA are filled with “wonderful moments.” Before VOHA Oliver worked in hospitality sales, but didn’t feel that was “making a difference.”

The most gratifying part of the work at VOHA, she says, is “when we have an intake for a new member and four months later to see the hope in their eyes. It’s watching them improve and to have a hand in that.”

One of the most challenging aspects of living with aphasia is the isolation, says Oliver. “They are scared they will not get their words out,” she says. “They lose friends and people don’t know how to talk with them.”

When asked if she has any suggestions for family and friends of people with aphasia, Oliver says, “Lean into it; do some research and/or go to a workshop to understand. [If] your friend, your mom, your grandpa has aphasia, include them.”

Voices of Hope for Aphasia (vohaphasia.org) is located at 6798 Crosswinds Dr. North, Suite B-102, in St. Petersburg. Contact Debbie Yones, executive director, at 727-249-1953 or Debbie@vohaphasia.org for information about available services, volunteering and/or donating.

« Previous post
‘Tis the Season for Art!
Next post »
Hey, What’s That? The Beauty of the Beautyberry