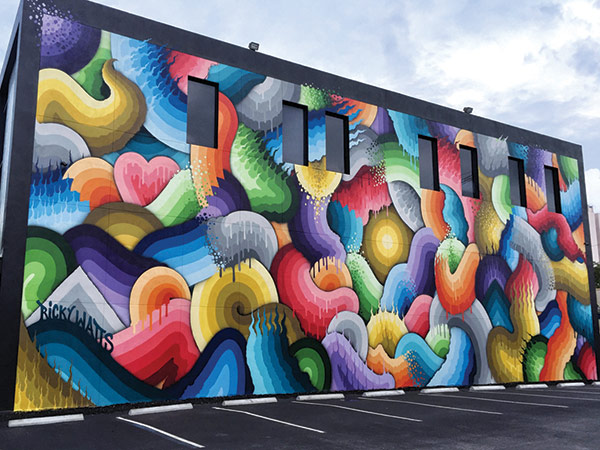 Almost Everywhere You Turn These Days, There’s Another Magnificent Mural 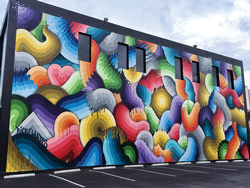 Eye of the Storm by Ricky Watts

In most cities, the alleys are the last place you’d expect to find world-class art. In St. Petersburg, however, home-grown and internationally imported muralists have thoroughly staked their claim to the backs of our urban buildings, raising the bar and completely redefining the very notion of street art.

A phenomenon in play since 2010 – dovetailing with the refurbishment of the Crislip Arcade and the re-branding of the 600 block of Central Avenue as the Central Arts District – the mural scene here has been on a steady upward trajectory for the past five years. It’s so hot, in fact, that it took a mere matter of months to pull together the epic SHINE St. Petersburg Mural Festival, held this past September.

For SHINE, artists from all over the country – and as far afield as Toronto and Rome – alighted on our city, happy to mount works alongside such renowned St. Pete creatives as Bask, Chad Mize, Pale Horse, Tes ONE, and the Vitale Brothers. 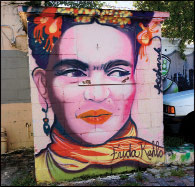 Woven into the fabric of beloved existing murals (like Jennifer Kosharek’s Frida Kahlo, Chad Mize’s Twiggy, numerous works by Derek Donnelly, and the stunning Tes One and Pale Horse collaboration on the back of the State Theater), SHINE threw a spotlight on St. Pete as a hotbed of outdoor art. By attracting high-caliber artists like Atlanta’s Greg Mike, whose work lives on the walls of the Facebook headquarters, and Shark Toof, who counts Samsung and Apple among his clients, SHINE let the rest of the world in on a secret we natives already knew: this is the city to express yourself in a big way. A really big way. As in massive…

Take a SHINE favorite, Eye of the Storm by Northern California graffiti guru Ricky Watts, as just one example (shown above). Measuring a whopping 96’x39,’ the swirly beauty, located at 600 1st Avenue North, required a staggering 500 cans of spray paint, according to John Collins, executive director of the St. Petersburg Arts Alliance.

One of several local art powerhouses who helped bring SHINE to fruition, Collins got into the daily nitty-gritty of making the murals happen. “Ricky is amazing with spray paint,” says Collins. “And we recycled all those cans, by the way. We gave them to another artist and I can’t wait to see what she’ll do with them.” 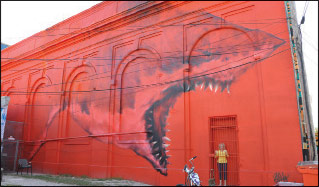 Another SHINE mural winning raves is the hauntingly beautiful portrait of a young girl reclining against her muzzled pooch at 1246 Central Avenue. Like many SHINE works (and street art in general), this one doesn’t have a title. But it does have a hell of a backstory, says Diane Shelly, executive director of Florida CraftArt and a driving force behind SHINE.

Painted by a young Dominican-born, Miami-based artist who goes by the name Evoca1, the mural symbolizes the anguish he, his sibling, and their dogs endured when their parents battled through a bitter divorce. “When the parents were going through those struggles, the kids and their Rottweiler dogs were pretty much ignored,” Shelly explains. “The Rottweilers got in trouble, so they had to be muzzled. Evoca1 paints Dobermans, not Rottweilers, but that’s where the muzzle idea comes from. And the girl is actually his sister. So his point is that no matter what you’re going through, you need to nurture your pets and your children. Nothing should take precedence over that.”

Evidently Evoca1 practices what he preaches. According to Shelly, during the week he spent in St. Pete painting his mural, he kept his wife and child nearby the entire time.

Given how much blood, sweat, and tears goes into some of these murals, it’s only fitting and fair that they get to stick around for a while. Unlike a typical exhibit at a museum or gallery, which dazzles and captivates viewers mainly only during the time-frame they’re seeing it, outdoor art doesn’t quickly fade from memory. We literally live with it, catching it in our sightlines every time we pass by on foot, bicycle, or car.

Sure, they can be can completely painted right over at some point. And they can also slightly morph over time; a few of the older murals in the primary ‘art alley’ behind the 600 Central block are slowly getting gently tagged by guerrilla graffiti types.

Still, there’s an element of civic pride that helps keep St. Pete’s murals intact. And in the case of SHINE, there’s an outright year-long commitment.

Under a dual-ended agreement between the SHINE steering committee and the building owners who graciously granted access to their walls, the works can’t be touched until next fall at the earliest. And by that time, the sequel will be well under way.

Yes, we’re happy to report that SHINE St. Petersburg will have a second act. (If not a third, fourth, and fifth.) 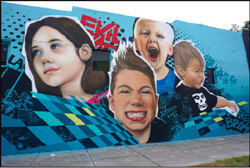 Mural by the Vitale Brothers

One of the reasons the first incarnation of SHINE went so smoothly – and the fact that St. Pete has long been the proud host of some of the best mural collaborations anywhere – is the intense spirit of teamwork our native creatives bring to the table. Rather than competing so fiercely that they won’t work together, St. Pete’s artists are happy to cut everyone in on the action – even those from out of town.

“The SHINE artists all worked together beautifully,” Collins recalls. “They were all so respectful of each other. And so smart! You gotta be smart to paint one of these things.”

Smart and wildly skilled, that is. Both Collins and Shelly were thrilled to see the elaborate working processes of some of the SHINE artists unfold. “There are three ways to create murals –  freehand, grid, or projection,” Shelly says. “Evoca1 decided to do a grid, but he did a grid like we’ve never seen. It was all these little slashy lines and we couldn’t figure out how he the heck had interpreted it. He said, ‘There are more slashy lines where there’s more detail needed.’ Then he covered up all the lines and it’s absolutely the most amazing thing.”

“For two days, all we saw were Xs and lines,” Collins recalls. “But that’s how he scaled it, and then he went back and filled it in.”

Because a few of the SHINE artists had never done murals before, St. Pete’s Vitale Brothers really stepped up to the plate to prep walls and lend a helping hand. They also contributed a splashy work of their own, featuring a bunch of punk rock babies in mohawks and skull T-shirts, at 2063 Central Avenue. “We kept the Vitale Brothers really busy,” says Shelly.

Of course, all that SHINE pitching-in extended to St. Pete’s local businesses, too. As Collins points out, Courtyard Marriott couldn’t have been more generous in hosting the artists. Kawha supplied countless iced coffees, and the muralists were never without bottled water and other energizers to help them power through long, hot days (and nights!) of painting. In total, says Collins, there was north of $100,000 in in-kind contributions, including lodging, food, art supplies, printing, design, and donated artist fees.

But, the event wouldn’t have happened without the fleet of volunteers who generously gave of their time to knock on business doors to secure walls and raise money, as well as a dogged steering committee led by Leon Bedore, aka Tes One. In particular, Collins credits Wayne Atherholt, director of the Office of Cultural Affairs, as a catalyst for SHINE. 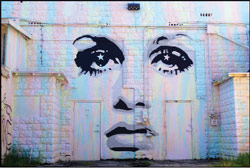 And thanks to an array of tours, the murals – SHINE and otherwise – are staying top-of-mind for both visitors and residents. And some of them, including eight trolley- and two bicycle-tours, have even served as fundraisers for SHINE 2016.

For those who really want to get up close and personal, a walking tour, such as the one offered every Saturday morning by Florida CraftArts, might be the best bet. Typically led by a local artist, the tours run about an hour and a half, and really delve into the ‘how’ and ‘why’ behind many of the works.

“You see these murals, but you don’t know the backstories behind them,” says Shelly. “It’s fun to understand how they were created, and what led to them. You turn the corner on the back of the 600 block and it takes your breath away. It’s just mural after mural.”

Still, as Shelly points out, St. Pete has plenty of room for more street art – all over town. “People have asked me about the next SHINE: ‘Will you just use the same walls?’ No. There are plenty of walls. We have so many walls we had to turn people down.”

There will  be no shortage of amazing talent either – both art and administrative. “This town has just lit up over the last few years,” Shelly notes. “And that’s because the artists’ organizations in this community have such a collaborative spirit. We all work together to make it a better city.”