September 12, 2018by Will MichaelsNo CommentsAll, History

Old Northeast and what was to become Snell Isle were originally connected by a rickety one-lane wooden bridge as early as 1917. Early master developer C. Perry Snell opened his upscale Snell Isle development in 1925. In 1928, Snell donated three lots just north of the bridge to the women’s organizations of St. Petersburg for the purpose of their building a club house which would serve all of the 15 women’s organizations then in the city. Snell stipulated that the building was to have an auditorium with a stage and that the architectural firm of Kiehnel and Elliot be used to design the building. 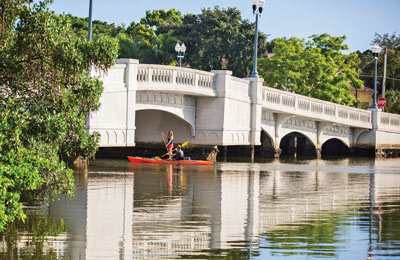 Richard Kiehnel and Leo Elliot were the nation’s leading architects in developing the Mediterranean Revival style architecture for which St. Petersburg is so well known. They were based in Miami where among their many buildings was the famous El Jardin. In St. Petersburg, they also designed the Snell Arcade and the Rolyat Hotel, now Stetson Law School. The Club House was completed in 1929.

The impressive St. Petersburg Woman’s Club building still thrives on its original site. However, the women were not happy with the old 1917 bridge and waged a campaign for a new one. The current bridge – built in the style of Renaissance Venetian bridges – was begun by Snell in 1928, but not finished until 1931. Snell intended to pay for the bridge in its entirety, but  he ran out of money and the City had to step in and help out. Still, Snell paid for the lion’s share, some $43,000. The City’s tab was $29,000 for a total of $73,000. The bridge finally opened on Christmas Day, 1931. The bridge’s architects were Hadley, Nordstrom, and Atkinson who also designed the Union Trust Bank, the Snell Isle Country Club, and the ‘Thrill Hill’ bridge over Salt Creek on 3rd Street South. 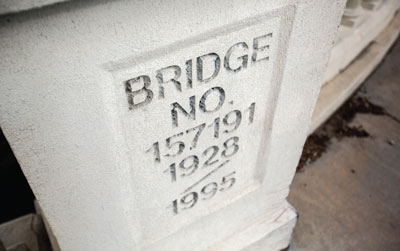 This first Snell Isle bridge was designed to carry 20-ton trucks  and a 50-ton electric trolley, although the trolley system was never extended across the bridge. It included a double-leafed bascule lift (drawbridge) to allow tall pleasure boats to pass through, often to the annoyance of waiting cars. When the lifts were closed, there was eight feet of clearance for small crafts. The bridge was 214 feet, nine inches long, had a 30-foot roadway, plus six-foot sidewalks on either side. It rested on 72 piles driven approximately 30 to 35 feet into the bayou. Attractive balusters lined each side. Detracting from its appearance was the running of utilities on poles across the bridge. Nevertheless the St. Petersburg Times declared it a “graceful and attractive design.” At a later date, attractive tall light fixtures were added.

The bridge was reconstructed in 1996. At that time the bascule leafs and operating systems were removed and the bridge span became permanent. The bascule had not operated since about 1970. Channel clearance was increased slightly by eight inches. Also, the roadway was widened by five feet and utilities were encapsulated in piping run through the bridge. Traditional hexagonal brick pavers were added for six-foot-wide crosswalks, and the double-fixture light poles that had been removed were restored. The cost of the reconstruction was approximately $1 million. An article in the Times reported that “city engineers have bent over backwards to accommodate residents by keeping what amounts to a completely new structure looking just as the old one looks.” In 2015, it was estimated that the bridge accommodated about 11,000 vehicles a day, three percent of which were trucks.

A 2012 Florida Department of Transportation Report described the Snell Isle Bridge as exhibiting “a number of elegant architectural features including the curved brackets that support the railings of sculpted balusters, arched girders, textured fascia, and gracefully curved entrances.” The report goes on to state, “It is historically important because of its age, its original bascule technology, and for the effective way it expresses the classical architectural treatment favored by many Florida developers during the 1920s.” Finally, the report noted that the bridge was determined eligible for the National Register of Historic Places for its architecture and engineering during a 2000 survey.

The City is once again contemplating a reconstruction of this venerable and much-loved bridge. A 2015 bridge inspection rated the overall condition of the bridge as fair (a 2 on a 1-4 scale). The city’s Better Utilizing Investments to Leverage Development (BUILD) application is requesting $860,400 from the federal Department of Transportation. The city will provide a 40 percent match from city budget funds.  The grant proposes to advance necessary bridge replacement studies and complete the engineering design with the goal of replacing the aging Snell Isle Bridge, which is the main point of access and egress for many residents.  Moreover, the Bridge is the only multi-modal exit during hurricane evacuations, as it must be taken in order to access official evacuation routes.” 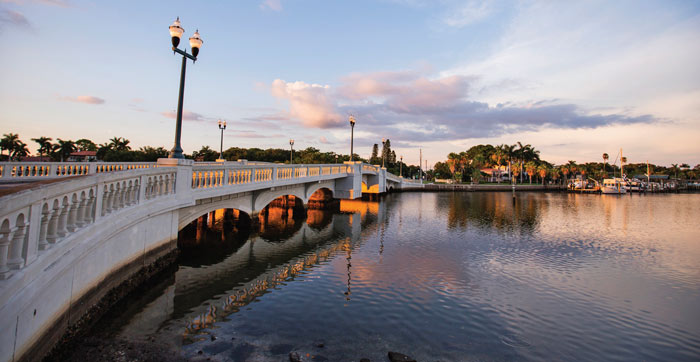 The Historic Old Northeast Neighborhood Association (HONNA) supports the City’s application provided the state review the bridge for preservation and mitigation. The Association is not opposed to structural improvements, but believes it is most important to preserve the historical integrity and appearance of the bridge for future generations.  HONNA emphasizes that the “Snell Bridge connects the Historic Old Northeast to Snell Isle, and has been a landmark for almost a century.  It is also National Register-eligible, so the integrity of the bridge and the surrounding context is most important to us.”

In 2001, a 40-member production crew filmed a 30-second spot commercial featuring GMC trucks and SUVs crossing the Snell Isle Bridge. When asked why the bridge site was selected for the filming, a spokesperson for the company stated, “We felt the scene with the [Snell Isle] bridge really screamed Florida with the palm trees and Mediterranean homes.” Those of us who live here think no less.