May 17, 2022by adminNEJNo CommentsAll, Cover Story 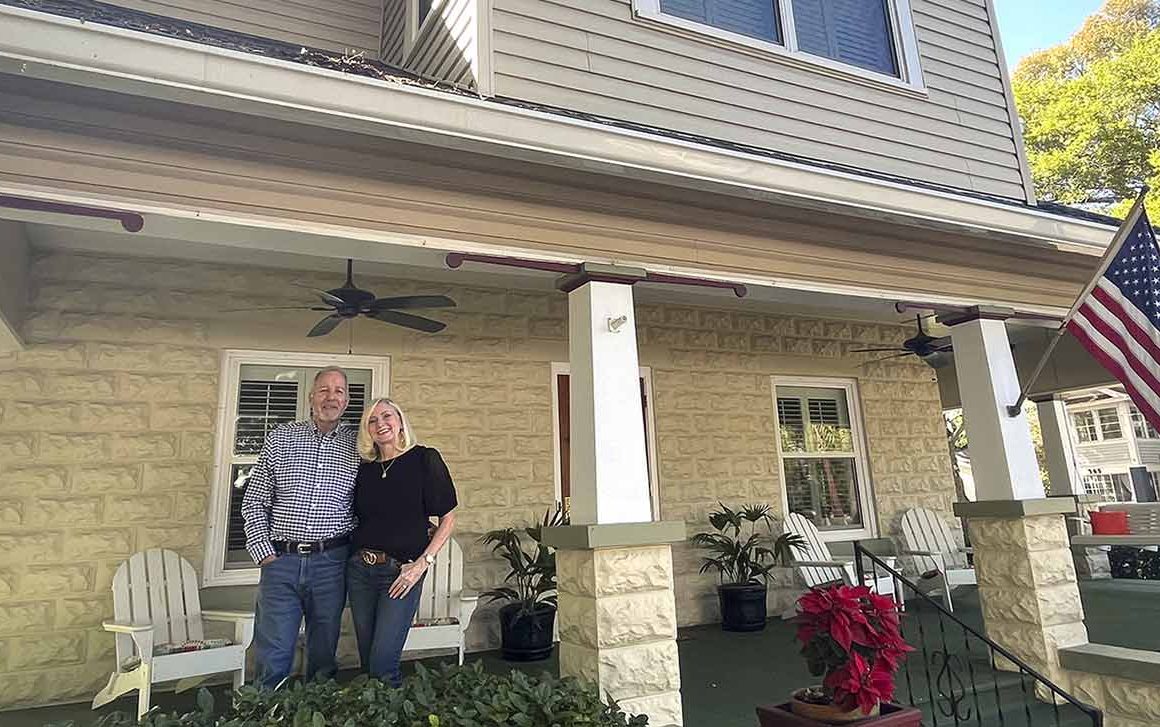 The house at 1630 Locust Street had been in Dave Bennett’s family since his mother bought it in 1974. Back then, it still featured two apartments on the second floor, remnants of its years as a guest house. Dave and his wife, Pam, bought it in 1996 when the large home became too much for his mother to care for. They’d done some cursory research as they renovated the home over the years, but like many residents in St. Pete’s charming historic neighborhoods, they were curious to learn more. Having gazed admiringly at their home from my front window over the past seven years, I was eager to help.

Fortunately for today’s amateur researchers, there’s a wealth of tools to explore the history of your home. Almost all can be found online, though some sites require memberships. Other resources are free at the public library, or at the St. Petersburg Museum of History for a membership fee. (See sidebar for details on resources mentioned in this article.)

I started my research on the Bennett’s house with a sidewalk survey, taking a good hard look at the house from the outside. I pulled out my copy of A Field Guide to American Houses and identified the house’s gabled roof, porch supports, wide eaves, and decorative canoe brackets as classic features of a Craftsman Bungalow, an architectural style that swept the country in the early part of the 20th century. The Bennett’s home features a lovely, wide, wraparound porch on two sides. Vinyl siding covers the upper story, over the original wood and cedar shake, but I recognized the first floor building material as rusticated block, an early form of concrete block designed to resemble stone. With a lack of natural stone available in Florida, rusticated block was an economical alternative and had the added advantage of being poured into forms on the construction site. It became popular in St. Pete after the turn of the century, a clue to the age of the Bennett home.

My next step was to consult the Sanborn Insurance Maps, a series of maps created after the Civil War and updated every few years to help fire insurance agents determine the level of risk to properties in a rapidly developing nation. Drawn using symbols that resemble hieroglyphics, the maps include details like size, shape, and construction material (brick, wood-frame, etc.), street names, lot lines, house numbers, and even details on prevailing winds – important information when assessing fire risk! The St. Petersburg maps go back as far as 1899, though many of the houses in our reading area won’t appear until the 1923 map. That’s where I found the Bennett’s home, the lone house on the corner of 17th Avenue NE and Locust Street. In 1923, the maps show the porch wrapped around three sides of the house.

Next was a visit to the St. Petersburg Public Library to review the Polk City Directories. Named for Ralph L. Polk whose company sent enumerators door-to-door, this precursor to the phone book is a researcher’s dream. Information is not only sorted by name, but by street.

The earliest directory available at the public library is from 1916. In that year there was only one home located on Locust Street north of 12th Avenue, at the corner of 17th Avenue North. It was listed as the home of Alva Wright and his wife Lula. Boarding with them was their son Ed Wright. This was a research jackpot! As a St. Pete historian, Ed Wright is a name I’m familiar with – by the 1970s, he was the richest man in Pinellas County, owning more than 50,000 acres of land. But in 1916, Ed Wright was just a 24-year-old retail clerk working at the Lewis Central Grocery, and still living with his parents. His father was a character in his own right, having earned local notoriety during a 1911 scuffle – at the annual Washington’s Day Parade of schoolchildren, of all places. At the request of veterans from the Grand Army of the Republic, the school superintendent asked the local Confederate veterans not to carry the Confederate flag in the parade. Alva Wright, who was with Robert E. Lee during the surrender at Appomattox Court House, was incensed, and responded that he would carry the Confederate flag even if he had to “wade up Central Avenue in Yankee blood!” The melee would mark the end of the parade and the tenure of the superintendent.

Curious to know if the house dated to earlier than 1916, I called Jessy Breckenridge, archivist at the St. Petersburg Museum of History. The museum has city directories dating back to 1908, and Jessy happily checked the 1915 directory where she did indeed find Alva Wright living at the corner of Locust and 17th Avenue North. She also checked the 1914 directory, but found no record of the Wrights, or a house at that location, meaning that the house was likely completed in 1914 or early 1915.

Next, I turned to archival newspaper research to learn more about the house and its residents. I used newspapers.com, which provides searchable archives for more than 23,000 newspapers, including local papers like the Tampa Bay Times (formerly the St. Petersburg Times) and the Tampa Tribune. The Bennett’s house and its residents appear in the paper many times over the years (it was here I found the story of Alva Wright and the flag), but the address vacillates between 1620 Locust Street, 356 17th Avenue North, 356 17th Avenue NE, and the current 1630 Locust Street. I found an explanation for this in the book Perry Snell: His Place in St. Petersburg, Florida History by Judy Lowe Wells. This local history is packed with revealing details about the development of St. Petersburg, and in particular the neighborhoods of Old Northeast, Snell Isle, Mirror Lake and Crescent Lake. The book describes deed restrictions in the Old Northeast, which dictated, among other things, that homes must cost a minimum of $5,000 and that livestock could not be kept on premises. A sad reminder of that chapter in our history, they also stated that no person of African descent could reside in the primary residence. Deed restrictions required all houses to face north or south (i.e., fronting an avenue, not a street) unless you were on a corner lot, in which case your house could have two fronts; this explained the dual addresses found for the Bennett house over the years. The book also explained that houses east of 1st Street were renumbered between 1918 and 1920 when the avenues were divided into “North” and “Northeast” (a bane for mailmen and visitors ever since), so researching the area’s oldest houses often means figuring out its original address.

From old newspapers, I also learned that members of the Wright family occupied the home for more than 15 years, selling it in the late 1930s to settle the estate after the passing of Alva and Lula Wright. Throughout the late ’30s and ’40s, the house was advertised in various forms as a guest house, a common practice in St. Pete during the Depression when homeowners rented out spare bedrooms for extra income to tourists still wanting to enjoy St. Pete’s sunshine. In 1943, the house on the corner of Locust and 17th was advertised as an ideal rental for Army or Navy officers and their wives – seeking to capitalize on the huge numbers of military members stationed in the city for training during WWII. Sure enough, the city directory lists a James Collins of the US Navy living there in 1944. Later that year, rooms were once again advertised, but this time for “girls only.” In 1949, it was advertised as a “private home for elderly folks” boasting a nurse on staff. By the 1960s, the home was marketed as three separate apartments, which is how it was arranged when Dave Bennett’s mother bought it in 1974.

To determine when the home was converted into a multi-family unit, I visited the City of St. Petersburg’s property cards database. Historic property cards record any permitted work done on a house – things like plumbing, electrical work, additions, even installing a water heater. Record keeping can be spotty, but in the best of circumstances, it’s a great place to find out when a house had significant modifications. The property card for the Bennett’s home revealed when their garage was originally built, when a bathroom was added, when the aluminum siding was installed, and that the house was converted into three apartments by the 1960s. Dave remembers a memorable tenant who lived in one of those apartments in the late ’70s: Vilis Gegeris, a Latvian Holocaust survivor who lost his mother and daughter in a concentration camp. Vilis had a fervent love for his adopted country, and a naughty streak – on occasion slipping the teenage Dave a shot of liquor.

I uncovered a rough timeline of Dave and Pam’s house with just a few hours of research, but I wondered if there were stones still unturned. I called upon Emily Elwyn, an architectural historian and longtime board member of the historic preservation advocacy organization, Preserve the ’Burg. Emily noted the importance of familiarizing yourself with local history to place your house in context of the city’s development. For example, knowing St. Pete’s tourism history, Emily speculated as to whether the front dormer on the Bennett’s house was a later addition added to provide space for boarders. She also reminded us that asking your neighbors is one of the best ways to get a sense of whether a home has had interesting residents or major alterations. Emily added, “and nothing beats crawling around in your attic to see what you might find. I found movie scripts in my attic from the era when Weedon Island had a film studio!”

You can learn local history on walking tours Emily conducts for Preserve the ’Burg; she’s happy to answer any questions a tour-goer might have about their house. YouTube also has dozens of videos on the city’s history, including I Love the ’Burg’s History Half Hour virtual tour series, hosted by me and my husband, Jon Kile.

Researching your home’s history is a rewarding journey. Dave and Pam enjoyed learning about the many interesting people that once lived in their house, and have a renewed appreciation for the responsibility of caring for one of the oldest houses in this part of the Old Northeast. They are compiling copies of key materials and news clippings and putting together a narrative that can be passed along to future owners of what will certainly be referred to as the Wright/Bennett Home in future histories. So, grab your laptop or your library card and find out the story behind your house…but be careful, it can become an addiction.

Resources for Researching Your Home

« Previous post
When the “Monkey Trial” Stars
Came to St. Petersburg
Next post »
One Night Only: Our Elusive Nightblooming