Wilderness in Our Back Yard: Bird Island 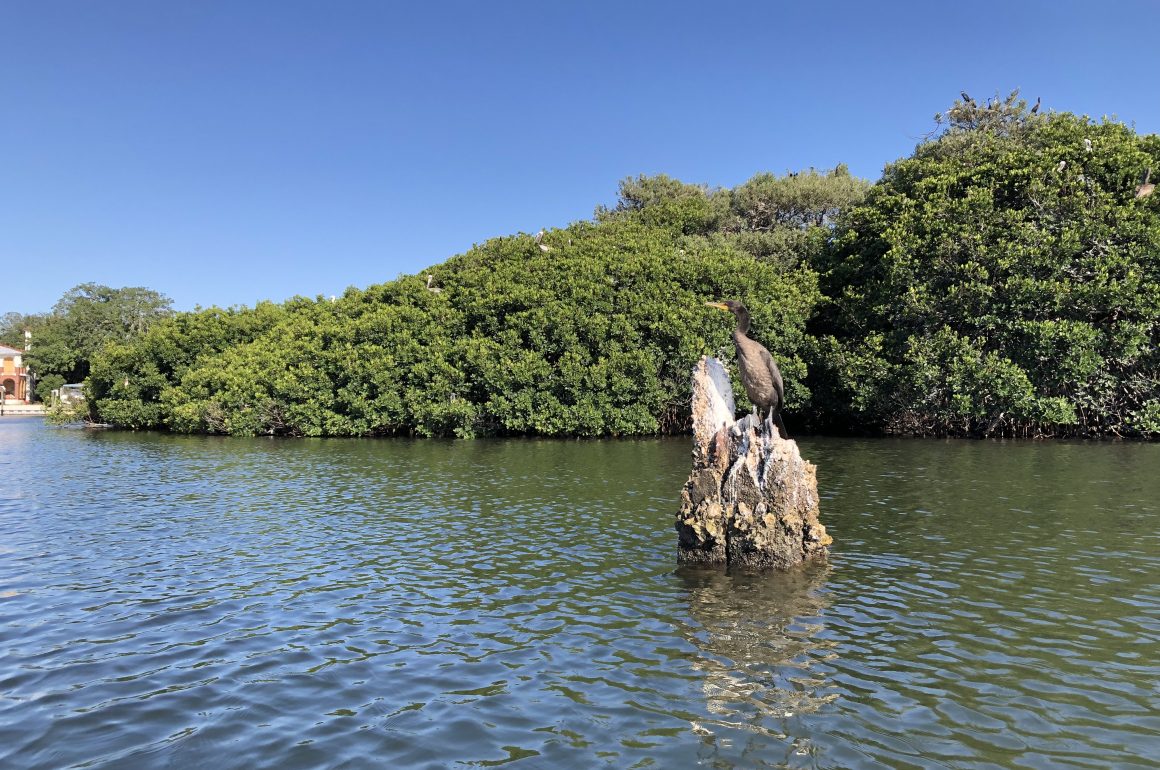 You know how, in horror movies, right before things get real, someone says, “It’s quiet. Too quiet.”?

That is decidedly not the case with Bird Island, sometimes called Coffee Pot Bird Preserve. You can hear – and often smell – the island residents before you see them. A cross-section of birds flap around this tiny Snell Isle island, from black crows to white ibis. Though it’s likely the crows have landed for an opportune snack, white ibis are among many species that nest and roost here. Herons, both blue, green, and triple crowned night herons, peer out from the mangroves. Roseate spoonbills provide occasional pops of color, while squadrons of brown pelicans dominate the island. All the birds seem to have one thing in common this morning – like every morning, every evening, and oftentimes in the middle of the day – they’re all in their feelings about one thing or another.

It’s loud, but it’s a wonderful type of loud. Some Florida neighborhoods have the relentless squawk of parrots and conures, while others resonate with sweet, almost melancholy osprey calls. Near Bird Island, the chatter and chaos of this integrated island tell you where you are on your walk, as herons, egret, pelicans, and yes, even crows alight on the mangroves. Some of the leaves, streaked with silver, give insight into which branches the birds favor. Certainly, somewhere in the midst, a decent bit of bird romance takes place, and the resulting hatchlings spend their early life in this tiny melting pot of an island.

While those refuges enjoy national protection and more water between them and human developments, Bird Island remains something of an anomaly, a final vestige of what St. Petersburg’s waterfront might have looked like before the dredge-and-fill endeavors that allow the development along the water. The bird diversity of the island is notable.

“I think it’s one of the best places to see birds from the shore,” says Beth Forys, a professor of biology and environmental studies at Eckerd College who specializes in birds. Forys lives in Old Northeast and is no stranger to Bird Island. She says it makes an ideal habitat for so many species of birds for one main reason: A lack of mammal predators.

“There are no terrestrial mammals [on the island],” she says. “There are no raccoons or coyotes.” Coyotes, first found in Pinellas County in the 1970s, abound in the area – but they’re not big on swimming. It’s a good thing, too, Forys says. “One coyote would take out every single nest,” she says. A motivated racoon could swim there and find a ready buffet, but, she adds, “I can’t see a racoon being, ‘Yes, I’m going to go there.’”

While some birds won’t hesitate to eat other birds – some jays, for example, are notoriously unsentimental about nest plundering – that’s not a behavior observed from many birds on Bird Island. A great egret, Forys says, likely won’t eat a roseate spoonbill chick. The crows could but, she says, “They’re probably scavenging.”

The birds that live there tend to nest in trees, Forys says, and adds that the number of birds – and different species – offer another benefit. “I think the presence of all of them together might be good,” she says, because they have a better warning system, if not a stronger defense, against predators.

Once upon a time, not so long ago, a private company moved to protect the island from another type of predator.

In October 2006, the City of St. Petersburg designated the island a preserve, albeit a privately owned one. A limited liability corporation, Bird Island LLC, bought the island for $60,000. According to the then-St. Petersburg Times, the company – whose principals, P.N. “Bud” Risser III and Jacquelyn Copperwheat are also principals in Heron Holdings, formerly Risser Oil – snatched the island from the hands of developers who, the Times reported in 2007, had plans to build four wooden, solar-powered stilt homes on the island.

Anecdotally, a few locals recall another controversy at the time: Some didn’t appreciate Bird Island’s odor. Hundreds of birds live here; their homes – think of it as a salty, well-landscaped condo complex– include not only kitchens and bedrooms, but bathrooms. It seems, though, the current homeowners adjacent to Bird Island have adapted somewhat to the scent of conservation.

Florida has no shortage – and a long history with – privately owned preserves. In the 1920s, the Roebling family, best known for building the Brooklyn Bridge, created a privately owned park, Highlands Hammock, near Sebring. This later became Florida’s first state park.

Other landowners in Florida also have grabbed land away from developers to keep it private. Near Fisheating Creek, west of Lake Okeechobee, private corporations own several tracts of land designated as conservation easements. Throughout Florida, the developing Florida Wildlife Corridor includes conservation easements on private property as well. While these easements may include farm or ranchland, the landowners have sold the development rights (including the right to increase density) to various conservation groups, including The Nature Conservancy.

Coffee Pot’s Bird Island, though, doesn’t allow people and doesn’t belong to the Florida Wildlife Corridor. The birds, it seems, don’t mind that the land remains in private hands; they have a protected home among the boats, mansions, and seawalls.

St. Petersburg’s public waterfront – championed by William Straub, who edited the St. Petersburg Times – extends almost unbroken from Lassing Park in Old Southeast to the edges of Coffee Pot Bayou. The linear public space remains a standout in city planning, and any morning or evening, legions of locals and visitors stroll or roll along the waterfront. The birds take it in their stride.

At the northern edge of the public parks, you can catch a glimpse of Bird Island, although to really experience it, you need to walk along Brightwaters Boulevard in Snell Isle, or paddle past it (there is a public boat launch at Coffee Pot Park, and it’s a quick trip south, under the Snell Isle Bridge, to the island). Coffee Pot Boulevard provides a slightly more distant view. For boaters who get close, though, remember that it is a preserve: the island and its inhabitants are strictly for eyes and cameras only.

As you walk along the sidewalk encircling the bayou, nature threatens to break through its walled-in existence: red mangroves, trimmed into tidy boxes, send out prop roots over a gate, looking for water along the sidewalk. Shoots of green wind their way through the latticed concrete. Salt crystals glisten on boats. The seawall forms almost a complete circle, civilization all but hemming in the tiny preserve. But just off center of middle, Bird Island reminds us that, in Florida, the wilderness is never very far away.