July 22, 2019by Lynn LotkowitzNo CommentsAll, Why We Love the 'Burg 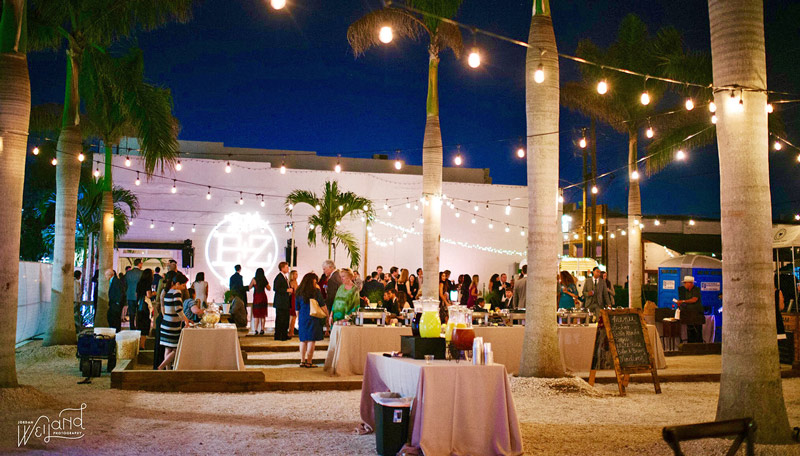 Drive down ever-changing Central Avenue, and at the corner of 11th Street you can’t miss the cluster of 23 royal palm trees, the sunshades, or the beach sand. The space serves as the outdoor patio for Intermezzo Coffee and Cocktail, a chic, stylish venture owned by Jarrett Sabatini, a 25-year-old entrepreneur who lives downtown on the edge of the Old Northeast.

A 2016 graduate of the University of South Florida St. Petersburg, Jarrett is one of the growing number of young, creative entrepreneurs who are adding to downtown’s high energy, and changing the landscape of St. Pete. Intermezzo’s hip vibe and minimalist decor with big windows overlooking the street bring to mind a trendy city feel, and that is exactly Jarrett’s goal. 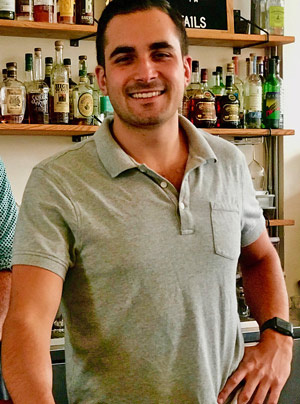 Initially, Jarrett launched Intermezzo as a temporary, three-month pop-up coffee shop. The concept worked and people liked it. But then temporary became more permanent. “My landlord, Jonathan Daou, became my partner. We got to know each other and he suggested we expand and do a bar,” says Jarrett. “While I was in college, I managed the wine section at Locale Market, and John knew I was a beverage enthusiast.” In January 2017, Intermezzo Coffee became Intermezzo Coffee and Cocktails.

How did he come up with the name Intermezzo? “It means intermission,” says Jarrett. “When I thought about my personal connection to coffee and what I like about good cafés, I realized I often went to cafés to take a break, read a book, listen to a podcast, or hang out with friends. It was like a break – or an intermission – in my day. I wanted to encourage that break and provide a good space for it.”

The hospitality business is in Jarrett’s blood. He grew up in Eustis, and his family owned a restaurant in nearby Mount Dora. “I remember my grandmother making a me a sandwich and sitting with my brother on the steps of The Clubhouse,” says Jarrett. “We were always around the restaurant and bar run by my family, until I went away to college.”

After high school, Jarrett moved to Gainesville, where his brother was a student at the University of Florida, and he attended nearby Santa Fe College for two years. But, to complete his education, he wanted a more urban environment and decided to move to St. Petersburg.

“At 19, I was ready to move to a bigger market. I wasn’t interested in partying in college. I wanted to move on with my life,” says Jarrett. “St. Pete had a cool bohemian atmosphere.” He enrolled at USFSP and got his degree in marketing.

“My goal was always to have my own business. I wanted to make my own decisions and do it my way,” says Jarrett. Growing up in the family’s hospitality business certainly gave him plenty of experience. From the time he was 13, he worked as busboy, prep cook, and waiter. “I did anything that was needed,” says Jarrett. “When I was 19, I made the whole cocktail menu. It was a passion. I loved trying to mix and test drinks. I was into it.”

Jarrett’s enthusiasm and energy are impressive. He’s continually working to improve and freshen the atmosphere of his business, changing the look of the interior to fit the season, and adding theme nights and specialty cocktails. At Christmas, he transformed the venue into ‘Miracle at Mezzo’ with holiday-themed drinks and over-the-top kitschy decor. I stopped for a visit last year and it felt like I was at a fun holiday office party. 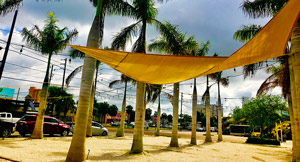 Sunshades and sand on Central Avenue

To spice it up more, he added bocce ball, picnic tables, and sunshades in the lot next door. Royal Palm Night Market – a popular weekly market featuring vintage goods, art, music, and cocktails – also takes place there. There have even been three weddings held under the palm trees.

Jarrett is single and says that for now, he’s driven by a passion for his work. In his limited free time, he enjoys reading old cocktail and wine books to stir ideas. Running helps him decompress.

What’s next? Right now, his plan is to focus on offering coffee by day and growing the cocktail business at night. But in five years, he hopes to launch another restaurant concept in a different location. “There are a lot of people who have moved here in the last few years from New York, Charleston, Chicago, and other great cities,” says Jarrett. “I want to bring a little taste of that vibe and atmosphere here. That was my idea with Intermezzo and it has worked well.”