Sitting on the corner of  5th Street and 1st Avenue South, lays a forgotten triangular sliver of land called Liberty Bell Park. Nowadays, motorists and pedestrians pass by with barely a glance of this shambles of a place that offers little to make the casual passerby to want to enter anyway. The neglected sidewalks are crumbling and the landscape is strewn with litter, leaves, broken branches, and little evidence of any rake, broom, or parks department interest. Over the years, the few existing benches have been vandalized, and sit as unusable broken skeletons of their former selves.  To add more insult to this lost space, there is an incongruous and faded No Trespassing sign stuck in what looks like a public space warning people to ignore any interest in entering. Judging from the plaque on a now worn, dull, and moss-covered plinth, this foreboding place had a purpose at one time, but it has been lost amidst the rise of our reenergized city. 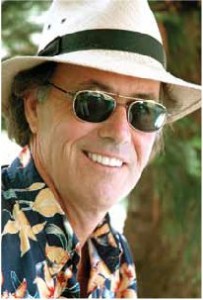 According to this plaque, Liberty Bell Park was dedicated to the memory of local people who best exemplified a spirit of promoting the “blessings of liberty” in a community that is apparently long since past. Starting in the early 1980s, the St. Petersburg Bar Association picked civic-minded people by a now-unknown criterion, and their names were emblazoned on the plaque in a ceremony that ended in the late 1990s. I have no idea who these people were, but on “Law Day” (whenever that is) assumedly a ceremony was held where the worthy recipient’s name was affixed to the plaque to be remembered for what must have been thought of as an eternity.  But nothing lasts forever, and the purpose of this park’s ceremonial status is now lost amidst the fog of history.

This is strange because St. Petersburg loves its parks – especially the ones by the water. As a matter of fact, some waterside parks may be suffering from too much love, because the Vinoy Park appears to be wearing thin from all the attention. Perhaps a schedule of never-ending weekly events may be too much to ask of public places designed during a much more sedate time. Of course, the prime example of a good park gone bad is the notorious Williams Park. Although politicians and civic leaders decry its downfall and offer platitudes instead of solutions to fix it, it remains a sad memory of a more civilized past. The decrepit fountain and unused and neglected bandstand are the symbols of the lack of desire and imagination needed to fix the place. 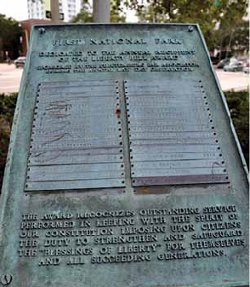 Although some parks are slowly being ignored to death, we still have many park areas where the constant pressure of modern life hasn’t yet left them behind. In the ONE neighborhood there are many quiet spots to go to relax, watch your children play, walk the dog, and enjoy nature. The best example of a park living up to its full potential is Crescent Lake which has well-maintained grounds, a beautiful view, a cleverly-designed playground, an historic baseball stadium, a nice dog park, and well-used tennis courts. I was told that years ago the lake was used as a dumping ground for retired city equipment, but through civic involvement it was resurrected to its present glory. This story may be apocryphal, but even if it is, it does emphasize the need of civic involvement to keep our city beautiful and livable.

When a city grows as fast as ours, we all must pay attention to the past or it will be erased. Let’s start by cleaning up Liberty Bell Park.