A Grand Jeté for Dance in St. Pete! 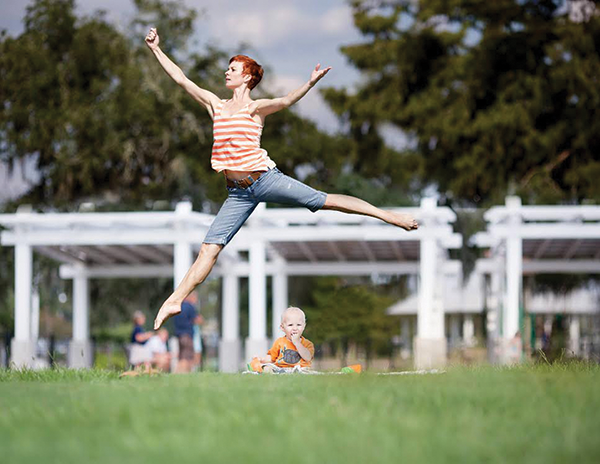 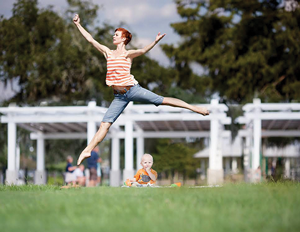 Listed as one of the top 52 places to visit in 2014 by the New York Times, our once sleepy little city is waking up and turning heads. While the natural beauty of white sandy beaches, dramatic splashes of purple, red, and orange sunrises and sunsets in our tropical paradise clearly warrant attention and attract tourists, the revitalization of our downtown area, growing culture, art, and food scenes, are opening eyes everywhere.

The dance community has a new champion in Helen Hansen French, an Old Northeast native. Her simplest movements are graceful, seemingly choreographed to flow delicately with her melodic voice which is replete with crescendos and diminuendos. She is an artist through and through. She has a deeply emotional sense for her art, through the eyes of a dancer, choreographer, and teacher… all roles she actively continues to pursue.

Highly accomplished and successful in the world of modern dance, Helen earned her Bachelor of Fine Arts from the world-renowned Juilliard School in New York City. She brings with her over 15 years of professional dance experience, a vision of St. Pete’s potential, a passion for her art, and a love for her hometown. She is a founding member of the St. Petersburg Dance Alliance, formed last year with four other local professional dancers, Michael Foley, Kellie Harmon, Paula Kramer, and Andee Scott. Their mission is “to establish and expand the presence of dance within the growing, vibrant arts community of greater St. Petersburg.” 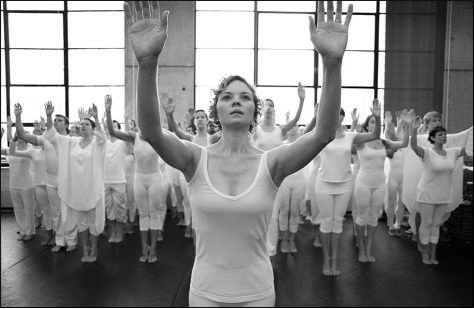 “We don’t have a lot of dance that comes through this area,” explains Helen. A big part of the Alliance’s goal is to educate the audience. “Everyone wants to see dance, but they don’t know what that means. People think that there’s only one way to dance, but we have all these other beautiful movers. As a dancer, I have tons of ideas!” She embraces variety. “You don’t have to love it all.” She recalls her own personal experience at the recent Mural Festival. “I appreciate the technique that went into all of them even if I didn’t love every mural. I like how my city looks with the art there. It’s the same thing… it’s just the performance aspect of it.” 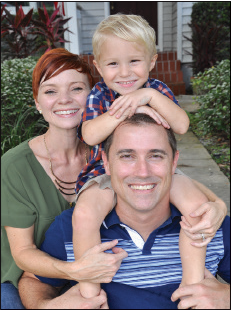 Helen with her husband Jon and son Paxton

Helen knew early on that she wanted to do something musical, but had not yet identified dance as her métier. Her grandfather had found a piano at an estate sale and gave it to her. She remembers pretending to write music and then dance to it. “It was very clear to me at a certain point that piano wasn’t going to do it for me because I actually wanted to feel the music the same way as when I was dancing. I remember thinking ‘this is so stifling, I can’t move to how I hear it!’” Nevertheless, she finished out her year in piano beholden to one of the Hansen household tenets: to always finish what one starts.

Helen first started dancing with Judith Lee Johnson and Miss Janie. Like many little girls, she started with a combination of ballet and tap, a half hour of each. “Miss Janie had all the little kids. It was a rite of passage. I liked ballet, classical ballet which is very technical and very organized.” Growing up, she thought herself a bit of a ballet snob, she admits. At the age of 12, she was accepted to a summer ballet program with the Pittsburgh Ballet Theatre, an enriching experience that challenged her identity. “The director told me that I was probably better suited for a modern career. I remember being aghast! But, he was totally right. I had danced en pointe, but my entire professional career has been modern.”

A graduate of the Pinellas County Center for the Arts at Gibbs High School under the tutelage of Suzanne Pomerantzeff (Ms. P, as she is referred to affectionately by her students), Helen reflects fondly of her high school years. “There was a period of time where we had a lot of amazing talent. I watched them go off to college and onto great careers. I was at the tail end of that generation.” Helen knew she wanted to go to Juilliard as an early admission student, allowing her to enter as a senior in high school. She proceeded to map out her course. Organized in her thoughts and actions, she says, “I thought I needed to prove to myself that I was mature enough to be away from home.” So for her junior year in high school, she applied to and was accepted at The HARID Conservatory in Boca Raton. There she learned at least as much about herself as she did about dancing. She says, “It was a really hard year.”

She was among a talented group of dancers on a direct path toward a professional dance career, but Helen continued to march to her own beat. Keeping her college aspirations a priority, she asked to be excused from rehearsal so she could audition for her application to Juilliard. Her request was met with confusion. No one from HARID went to college. They went straight to professional dance companies. Undaunted and undeterred, she continued with her Juilliard audition as planned. She was accepted. When she arrived in NYC, a few faculty who were familiar with her talent at Gibbs asked, “What happened at HARID? A little light in you went out.”

“I was devastated. But as an artist down the line, what they said influenced the choices I made. It was then when I realized that what I do outside the studio impacts what happens inside the studio. If I’m not happy with where I’m living, if I’m not happy with my surroundings, everyone sees it. I don’t think I knew that consciously. I knew that I loved to dance because of how I felt, but I didn’t realize that it could have done the reverse.” She surmises, “It could have been because I was 16… I don’t know. But it all worked out in the end.”

Upon graduating from Juilliard, she had already been invited to join the Buglisi Dance Theatre, a modern dance company in New York City, where she eventually spent over 15 years as a principal dancer and rehearsal director. In her professional career, among her countless accomplishments, most recently she also restaged Jacqulyn Buglisi’s Suspended Women for the Alvin Ailey American Dance Theatre last Fall, and spent the past summer in Umbria, Italy performing in Table of Silence, to honor the anniversary of 9/11. In the education arena, she has served as a faculty member of several schools, including George Mason University and Juilliard. She is currently on faculty at St. Petersburg College and John Hopkins Middle School. 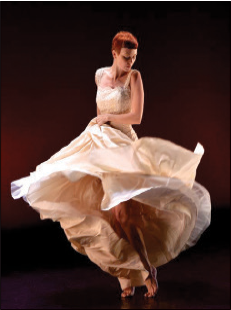 An artist is human, malleable, dynamic. Over the course of her career, she has changed, enriched by the experiences she has drawn from life. She describes her husband Jonathan, as someone with ‘an artist’s soul’, who understands and supports her. She became a different person after having their son Paxton. Each encounter added a unique dimension to her performance, and the emotions she felt took on a different but equally engaging persona for her art.

Since returning to the Old Northeast, Helen continues to pursue a broader vision for our city, imparting her expertise from all areas of the performing arts. She has several projects underway, including BEACON, making its debut at the Palladium this November 14. She is co-producing this dance series with Lauren Ree Slone, to showcase local choreographers and dancers. It was a very deliberate choice to keep the program local. They asked themselves, “What would happen if there were a dance series in St. Pete? Who would curate it? Who would program it and how would we produce it?” So they approached Paul Wilborn of The Palladium Theatre, and he agreed to present them. BEACON will feature three world premieres, and the works of four choreographers, providing the audience with an exposure to the breadth of talent available right here in St. Pete. She herself was awarded a 2015 Individual Artist Grant from the City, which she is using to create her piece “movement love letter to St. Pete” for the dance series.

Venues are not limited to a traditional stage. She says, “All of St. Pete is possible, but if the community isn’t educated to those possibilities, it will be hard to get organizations and funders on board.” She explains that in New York City, “There is a museum where dancers go to a designated space and create work, sometimes interacting with the audience. There are so many alternative spaces in St. Pete – spaces that aren’t housed yet – looking to share space.” She envisions dancers’ cooperatives, much like the artists’ cooperatives that are popping up all over town. 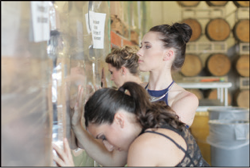 Early in October, the St. Petersburg Dance Alliance held an event sponsored by The Green Bench Brewery. Dance on Film, a series of four films, was made by local choreographers (all founding members of the Alliance) purposefully chosen to show the range in our area. Helen explains that the featured live performance by Kellie Harmon’s ROGUEdance was a great fit for Green Bench because of the edgier feel: a performance in sneakers and shorts, incorporating all aspects of the space as their stage, including the ivy wall. She explains the partnership for the event, “We’re not getting money from this, and Green Bench is not charging us for it. Hopefully we pack it for them, and they invite us back again!” Our city itself remains a focus throughout her projects. In a promotional video for the event created by Nick Gallina, she explains, “We shot this film all over St. Pete – areas where each dancer connected, using our own moving styles, our own vocabulary. We wanted to connect us, specifically to St. Pete. We all live here; we all work here; we all love it here.”

Helen is a multi-faceted artist. “I love performing. I love communicating with an audience. You get so much instant feedback whether or not your audience even realizes the exchange is happening.” Teaching is another aspect of her profession that she loves, but says, “It’s so hard. It’s very daunting to be responsible for someone taking in knowledge. I struggle with wanting my students to love something as much as I do, but knowing that I can’t teach them that. I can teach them how much I love it, and I can show them how to tap into something. But I can’t make them love it. I just want to open doors.”

“As a choreographer, I like flushing out an idea, but I’m highly collaborative. I like working with people and seeing what they bring to it. The nugget is mine…  but we all get what we want out of it. When I create, I sometimes get an overall feeling about what needs to happen in this space.” Her fingers flutter in the air… “a flurry of action here,” she describes, “and then calm over here,” as her palms float gently down. “It’s one of the hardest things – I have to suspend the side of my brain that wants to analyze what I just did so I can remember it tomorrow. I just have to go for it.”

Her performance, education, and choreography philosophies parallel her visions for planting the seeds of dance. She sees space, and she knows how to beautify it with movement. She brings energy. She is, as she describes, “highly collaborative” drawing other dancers, choreographers, cinematographers, artists, grant distributors, businesses together for a common goal. She is “opening doors” for us. In dance, she says, “I don’t think I’m ever going to quit seeing movement to music and space in specific ways. I don’t think you ever stop being an artist.” For our sake, let’s hope she never does!