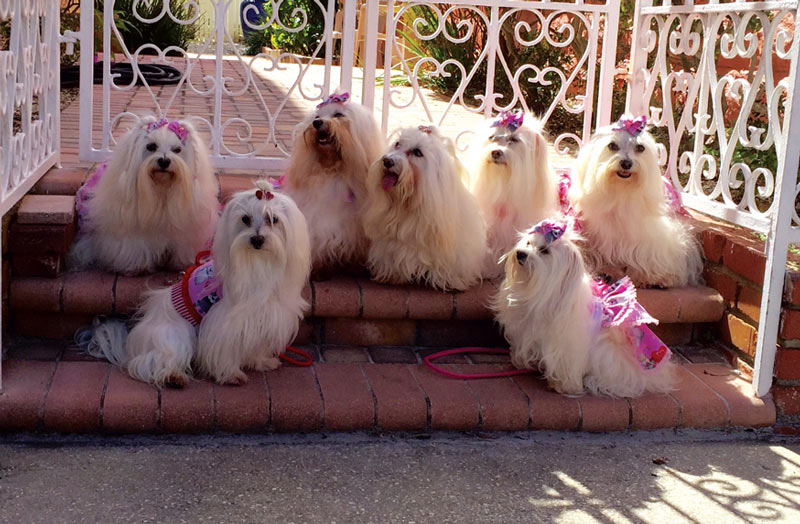 While strolling around Sundial St. Pete, the downtown shopping, dining, and entertainment complex, it is not unusual to run into interesting people and their pets. Encountering Marianne and Dan Blazowich walking their three carriages of Maltese therapy dogs is an absolute delight.

The dogs as well as their owners are friendly and sociable, so they usually draw a crowd. The dogs are quiet and dignified, wearing bows and costumes appropriate to the season or venue.

There is something magical about these dogs, almost angelic. These Maltese seem to be oozing love and inviting strangers to pat them or pick them up. They anticipate the emotional needs of humans and make eye contact as if they understand and can empathize with the person they are connecting to on a quasi-spiritual level. 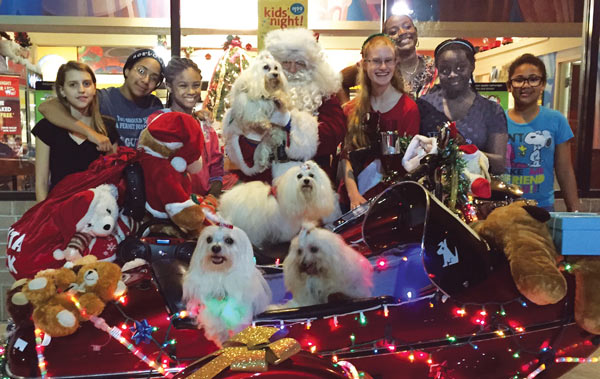 There is a reason the dogs give off this ethereal vibe. They are natural-born therapy dogs. The first person they rescued was Marianne, their owner. 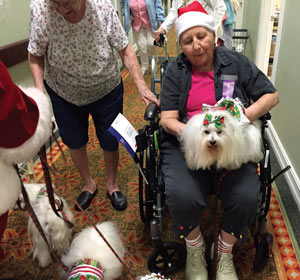 In 2006, Marianne and Dan lost their only child, Tony, who had just turned 23 years of age. Tony was in college, everything was going great for him, and his whole life was supposed to be ahead of him. He had a massive seizure and died suddenly. Marianne and Dan were devastated, but Marianne went into a deep depression that she couldn’t shake. Sometimes the sadness was so overwhelming that Marianne couldn’t get out of bed.

Then, two years after Tony died, the idea of getting a therapy puppy blossomed into a reality. Their first Maltese, Brenton, a male, changed everything. “None of it was planned,” said Marianne.

Marianne thought she would like to have a female puppy, too, so that she could put ribbons in its hair. They found one. And then they adopted another male, Gordon, the hugger who was a rescue dog. Gordon melts into the shoulder of anyone who picks him up and he hugs that person. They even adopted a 14-year-old Maltese from Philadelphia who was slated for euthanasia. Dan calls this one Grandma. One thing led to another and before they knew it, they were breeding and raising Maltese therapy dogs. 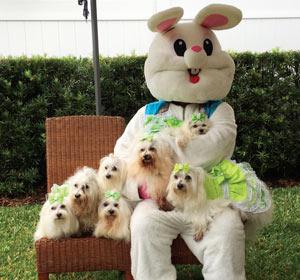 The couple and their growing brood of Maltese joined several dog groups in the area. First they joined Sarasota Dogs, which accepted all dogs; then they joined Yorkies of Bradenton which limited membership to small dogs; and finally, they joined Chihuahuas of Tampa Bay, a group that kept their membership to dogs weighing less than 20 pounds. The dog groups raise money to help support animal rescues and other charities in the area. In fact, Marianne is currently preparing for a Chihuahua wedding of two dogs with all the costumes and trimmings as a rescue shelter fundraiser.

In the early years of having the Maltese dogs, Marianne used to buy costumes for the dogs at various pet stores, but selections were limited, they didn’t always fit right, and she felt the costumes were not well-made enough to last. Never having sewn before, Marianne took up sewing and began to design and make all the costumes for her dogs. “It began with Halloween costumes,” said Marianne.

Marianne and Dan Blazowich have taken their family of Maltese therapy dogs up and down the west coast of Florida from Tarpon Springs down to Naples in support of various rescues and charities. They support Rainbow Rescue in St. Petersburg, St. Jude’s, breast cancer awareness and research, and many nursing homes with their furry four-legged friends. The dogs have appeared fashionably dressed or in their Harley-Davidson sidecar to help raise money for many a worthwhile special event. Diane said she would like to become affiliated with more nursing homes in St. Petersburg, particularly in the Old Northeast. “Our son, Tony was a kindhearted person, so we do this in memory of him,” said Diane.