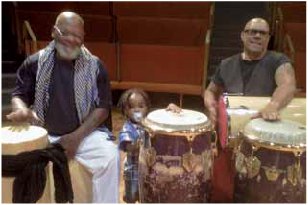 “On this International Day, let us promise to make peace not just a priority, but a passion. Let us pledge to do more, wherever we are in whatever way we can, to make every day a day of peace.” — United Nations Secretary General Ban Ki-moon

On Saturday afternoon, September 21, 2013, the acoustics of the magnificent hall of The Palladium Theater at St. Petersburg College will reverberate with pulsating rhythms, vibrant messages, and melodious voices emanating from some of the Tampa Bay area’s most talented groups and individuals. They will assemble at a musical concert in harmonic support of the call by the United Nations General Assembly to collectively celebrate globally and locally the reality of peace. 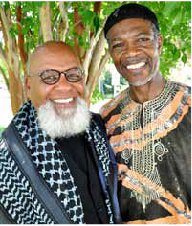 Fred Johnson and the author

Fred Johnson, internationally-known artist and performer, is producing and directing the show which will be presented on the Palladium’s main stage starting at 2:30pm. “Our plan is to present a 90-minute program comprised of a multi-culturally rich tapestry of music, dance, spoken word, and renderings of positive thought gleaned from the writings of global Masters,” Johnson explained. The Palladium is located at 253 Fifth Avenue North in downtown St. Petersburg.

Professionals and amateurs, youth and seniors, solo and group performers will stir the souls, lift the spirits, excite the minds, unite the hearts, and bring smiles to the faces of the audience that is expected to reflect the rich diversity of the Tampa Bay community. Performers will include indigenous Americans, a Latin World opening by renowned percussionist Gumbi Ortiz with Youth Peace Ambassadors, Gospel music, Kuumba African dancers and drummers, Mongolian music, dancers from India, and reflections on peace from notable thinkers and world leaders.

“Better than a thousand hollow words, is one word that brings peace.” — Buddha

Representatives from the St. Petersburg International Folk Fair Society (SPIFFS) will participate in their native national and ethnic attire. They will lead a procession as part of the event’s dramatic opening.

“Peace is one of humanity’s most precious needs. It is also the United Nation’s highest calling.”— U.N. Secretary General Ban Ki-moon

In 1981, the United Nations General Assembly, by unanimous vote, adopted Resolution 36/67 establishing the International Day of Peace (IDP). The Resolution was adopted in part, “…to devote a specific time to concentrate the efforts of the United Nations and its Member States, as well as the whole of mankind, to promoting the ideals of peace and to giving positive evidence of their commitment to peace in all viable ways.” Since 1982, International Day of Peace, aka Peace Day, has provided “an opportunity for individuals, organizations, and nations to create practical acts of peace on a shared date. More information is available on the official website www.interna-tionaldayofpeace.com.

“Peace is its own reward.” — Mahatma Gandhi

Other association and committee members include Rev. Dr. Russell Meyer, who serves as the executive director of the Florida Council of Churches; Dr. Roy Kaplan, former executive director of the National Conference of Christians and Jews who currently teaches at the USF Tampa campus; immigration specialist attorney Sepideh Eskandari of the Baha’i community; Rev. Robin Whitlock, pastor of St. Augustine’s Episcopal Church; and Rev. Kim Wells, pastor of Lakewood United Church of Christ.

“Peace is not the absence of war; it is respecting & accepting each other and promoting human rights.” — Miss Nida Ashfaq, International Young Catholic Students (IYCS), Pakistan

The concert at the Palladium Theater will be followed by a World Café   model   interfaith community conversation which will take place a few blocks from The Palladium at Trinity Lutheran Church located at 401 Fifth Street North. Both events are free and open to the general public.

“…all religions of the world teach us to respect man, regardless of color, race, gender and faith.” — Jahangir Piara, Organization for Peace and Development, Pakistan

Several groups and organizations have joined in the global Day of Peace observance and have agreed to be co-sponsors or partners in the celebration. Among them are the University of South Florida St. Petersburg Office of International Affairs; Achieva Credit Union; Eckerd College Center for Spiritual Life; Cook and Phillips Financial Group; and St. Petersburg College. The Fourth Street Branch of BankUnited hosted a preview and fundraiser social for the event on August 22.

“Peace is not merely a distant goal that we seek, but a means by which we arrive at that goal.” — Dr. Martin Luther King Jr.

The SPIA Events Planning Committee regularly hosts interfaith conversations and multicultural events at different venues throughout the city. Recent events were held at Christ Gospel Church, the Baha’i Center, Holy Family Catholic Church and at First Church of Christ, Scientist. The goals of SPIA’s interfaith events are:1. To diffuse antagonism, distrust, and ignorance regarding the world’s religions and the hatred directed at those who practice them;2. To increase mutual trust, respect, and civility by publi-cizing the similar core values of world religions; and3. To form relationships which could be useful in diffusing tensions in our community, should a need arise.For more information contact Rev. Janel Miller-Evans at (727) 776-6445 or via email at janelmillerevans@gmail.com or Sharon Cook at (727) 686-6875 or by email at sharonfcook@gmail.com.

“There are only two forces in the world, the sword and the spirit. In the long run the sword will always be conquered by the spirit.” — Napoleon Bonaparte