January 23, 2018by Will MichaelsNo CommentsAll, History 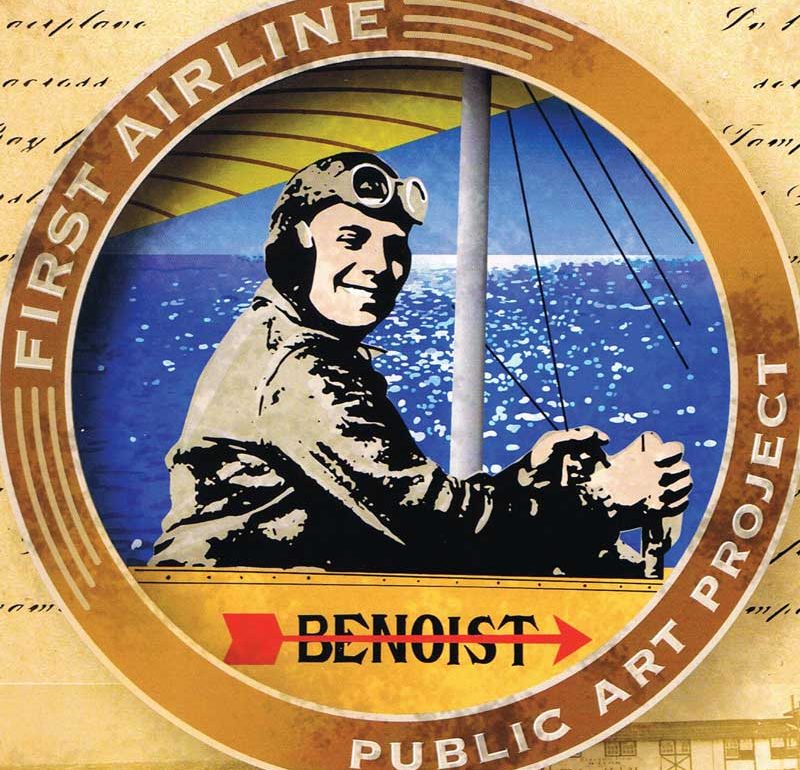 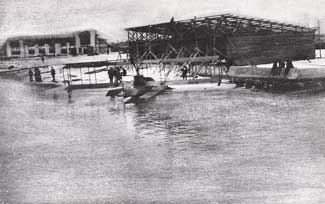 St. Petersburg-Tampa Airboat Line hangar built by the City, with the Benoist Airboat in the foreground, and the Spa in the background. The monument will be erected on this historic site.

The world’s first regularly scheduled airline took off from the Central Yacht Basin on New Year’s Day 1914. The airline was known as the St. Petersburg-Tampa Airboat Line. It was organized just a few months prior to that New Year’s take-off. The airline was the brainchild of Percival E. Fansler, a Jacksonville-based electrical engineer. Fansler enlisted the support of Thomas Benoist (pronounced Ben-wah), an early airplane manufacturer who arranged for the planes – or more precisely, the ‘airboats.’ The airboat was known as the Benoist, named after the airboat’s manufacturer.

The Benoist Airboat was an early version of what we now know as a seaplane, able to take off and land on water. That was a necessity at the time as St. Petersburg had plenty of water but no airports. The Benoist was supplemented a little later by a second airboat. The two airboats made up the airline’s total fleet. The Benoist accommodated one passenger in addition to the pilot. The second airboat was somewhat larger and capable of accommodating two passengers.

Thomas Benoist not only provided the airplane, he also provided the pilot, Antony Habersack Jannus. Tony Jannus was a test pilot for Benoist who set early records for passenger flight time, including a record for over-water flight in 1913. He held the first federal airline license and was the pilot when Albert Berry made the first successful parachute jump. 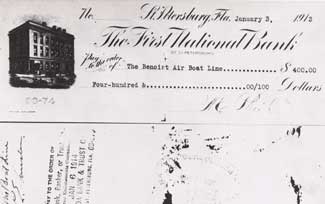 Early St. Petersburg Mayor Abe Pheil bid $400 in a charity to be the first passenger on the First Airline. His check is on display at the St. Petersburg Museum of History.

But, this world ‘first’ would never have been possible without the support of the St. Petersburg business community and the city’s government. Percival Fansler, (the brainchild behind the project) needed the backing of Board of Trade manager L. A. Whitney, as well as St. Petersburg businessman and later city mayor Noel Mitchell. He also needed a subsidy to help reduce the financial risk to Tom Benoist.

Fansler made his proposal to Whitney who immediately pledged $1200 to subsidize the airline. Whitney then referred Fansler to Mitchell who pledged another $1000. Mitchell, in turn, gathered 11 additional local investors to pledge $100 each to start the airline. This group included Lew Brown (publisher of the Evening Independent) Perry Snell, George Gandy, and Charles Roser. Mitchell even got the City to build a hangar for the airboat on the north mole of the municipal pier, at the foot of Second Avenue Northeast.

“Tony Jannus Will Make First Flight Thursday,” read the headline of The St. Petersburg Daily Times on December 30, 1913. On January 1st, 3000 people gathered to see the first flight of this fledgling airline. This was a huge crowd for the city considering the permanent population was perhaps 7000 at the time. Among the crowd was the humorist Will Rogers who was performing at the Johnny Jones Circus in St. Petersburg. In a charity auction to raffle off the first flight ticket, former St. Petersburg mayor Abe Pheil made the winning bid of $400 for the privilege of being the first passenger. Percy Fansler was invited to say a few words just prior to the takeoff. “The Airboat Line to Tampa will be only a forerunner of great activity along these lines in the near future… what was impossible yesterday is an accomplishment of today – while tomorrow heralds the unbelievable.” 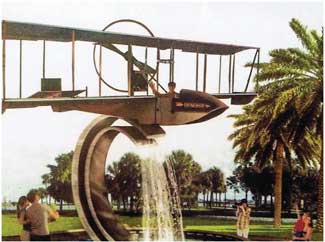 The central feature for the First Airline Monument will be a replica of the Benoist Airboat, the first airliner. This is a conceptual rendering.

Jannus then took off, skimming across the bay at a height of 50 feet. After a 23-minute flight, including a stop to adjust the drive shaft, Jannus and his single passenger, Abe Pheil, touched down on the Hillsborough River in Tampa. An even larger crowd of 3500 greeted the Benoist in Tampa. Tampa mayor Donald B. McKay welcomed Jannus and Phiel to the east side of the bay. The return trip took only 20 minutes.

Mayor Pheil was a major figure in St. Petersburg’s early history. Pheil owned the St. Petersburg Novelty Works, which was a building supply and sawmill business. He did much to improve downtown street conditions and was instrumental in bringing natural gas to the city. He served as mayor from 1912-13. Betsy Pheil, Abe’s granddaughter, remembers from family lore that Mayor Pheil tried to keep his sojourn on the world’s first flight a secret from her grandmother. How long this lasted is unknown. Probably not long.

Upon arrival back in St. Petersburg, Jannus dropped his flight goggles, breaking the glass. Ten-year-old Judy Bryan ducked under the rope holding back the crowd. Running up to Jannus, she asked if she could have the goggles. Without hesitation he gave them to her. Then he removed one of the brightly lettered Benoist pennants from the wing and handed that to her also. In the weeks that followed, Jannus usually made at least two regularly scheduled round trips a day between St. Petersburg and Tampa, carrying everything from Swift hams to bundles of The St. Petersburg Daily Times (the newspaper’s name was later shortened to the St. Petersburg Times, today’s Tampa Bay Times). Cost of a passenger ticket was $5 each way, and $5 for each 100 pounds of freight. This was not cheap. Five dollars in 1914, adjusted for inflation, is valued at $123 in 2017. While $5 a trip was high compared with the cost of rail or steamship, it barely covered the costs of operations. When Tom Benoist was asked how he could cover his costs and make a profit he stated, “There are at present about 30,000 tourists in the area and I believe a great many of them will patronize the airboat line to save time. Besides, I am anxious to demonstrate the capability and practicality of aerial transportation at a price anyone can afford even if such a low rate means a revenue loss to me, for today’s loss could very well be tomorrow’s profit.” 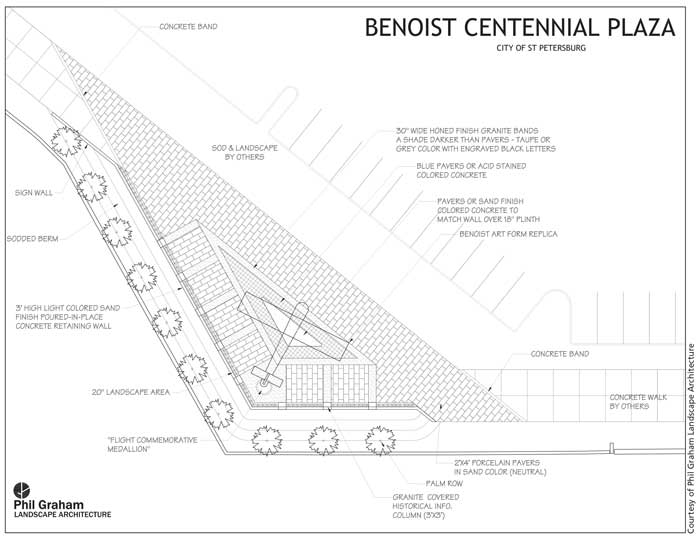 Concept for the First Airline Monument Plaza. The Plaza will be situated west of the previous Pelican Parking lot at the historic First Airline hangar and take-off site. Features include a berm and palm trees in the background to blend the monument into the park features of the Pier Approach, and blue tile to simulate water for the Benoist Airboat Monument feature.

Jannus lauded his time in St. Petersburg. In April 1914, he wrote in Aero and Hydro magazine, “All told, we believe that our work has stamped St. Petersburg as the aviation headquarters of Florida, and this is largely due to the hearty cooperation of the city and citizens of the town. There are now hangars that will hold four large [flying] machines and plenty of room to put more, and I must say that Tampa Bay is a fine place to fly in winter.”

Finally, as the tourist season wore down, the airline suspended its daily operations on March 31st. The airline continued for another month with a reduced schedule and flights upon request. The last flight was on May 5th. By the end of March, the airline had carried hundreds of passengers and thousands of pounds of freight without a single accident. The airline did not break even, but came close to it. It appears to have been self-sustaining in two of its three months of operation. In January, it only flew 18 days. The amount of subsidy drawn from the business community ranged between $540 and $1740. The exact financial net of its operations is unclear. Given more time for marketing and optimizing operational efficiency, the airline may very well have turned a profit.

While the airline did not quite make a profit, it paid other dividends. As the Times reported shortly after the airline was launched, “St. Petersburg is now coming to be known in a way she was never before heard of by people who otherwise would likely never hear of the city.” Commenting on the significance of the airline, Tom Benoist, the builder of the Benoist airboat said, “Someday people will be crossing oceans on airliners like they do on steamships today.” The airline served as a prototype for the future. Others would build upon the St. Petersburg-Tampa Airboat Line’s experience to create the multi-billion dollar aviation business that the world enjoys today.

Several organizations joined together under the banner of ‘Flight 2014, Inc.’ to plan the 2014 centennial celebrations of the First Airline. These included the Florida Aviation Historical Society, the St. Petersburg Museum of History, the Tony Jannus Distinguished Aviation Society, and the Chamber of Commerce. Flight 2014 is now seeking to erect a monument to the First Airline. Approval has been obtained from Mayor Kriseman and the city council for the project. The monument will be located on the Approach to the New Pier at the site of the original hangar, just west of the previous Pelican Parking area. This will be a high-visibility part of the New Pier Approach.

Ideally, the monument’s central feature will be a replica of the Benoist Airboat, the first airliner. St. Petersburg’s most noted landscape architectural firm – Phil Graham Landscape Architecture – has donated their services to plan the surrounding Benoist Plaza site. Panels will tell the First Airline story, and a time capsule of historic information is under consideration. A row of palms and a green berm will serve as background to the plaza blending the monument into our waterfront parks. Blue pavers will simulate the water which served as the Benoist Airboat’s runway.

An honorary advisory board has been established to support the monument. Prominent among community supporters is Betsy Pheil and the Pheil Family. Betsy is the granddaughter of Mayor Abe Pheil, the First Airline’s first passenger. Flight 2014 is seeking to raise half the funds from the airline industry and half from the Tampa Bay community. Donations are now being accepted and sponsors are being sought. Several airlines have already generously donated, including Southwest, American Airlines, and Alaska Airlines. Donations in any amount are most welcome. No city funds are being requested for the monument.

Historic monuments help give cities and other places their unique identity as well as educate the public regarding inspiring events and people. Think Statue of Liberty in New York; St. Louis Gateway Arch; the Marine Corps Imo Jima Flag-Raising Memorial; the Martin Luther King, Jr. Monument; and the Wright Brothers Memorial at Kill Devil Hills, NC. While the proposed First Airline monument is modest by comparison, it too has its importance. Monuments help to mark the spirit of a place. Yes, this is a story of both a Florida-first and a world-first. Yet more importantly, it is a story of the spirit of entrepreneurship worldwide, and a story of the spirit of Tampa Bay – a future-oriented community embracing the latest in innovation, taking a risk on a new idea, and proving the practical value of it all. It is first and foremost an inspiring story of the human spirit, and also a matter of community pride. Monuments are an effective way of making an important story better known and appreciated. While many may read a chronicle about the First Airline, many others will learn by visiting an engaging monument at an historic site. There is something magical about being at the very place where it all began.