Even in Magic, Happiness First 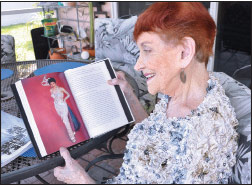 Celeste Evans, one of our Old Northeast Neighbors, was one of Canada’s first and most successful female magicians.

This May, the Florida Magic Convention celebrated its 50th anniversary in Orlando. Neighbors from the Old Northeast and surrounding areas attended as guests on behalf of the Tampa Bay Magic Club. Among those present was one neighbor who enjoyed a professional career in magic, as one of Canada’s first female magicians (and one of the most successful female magicians to date): Celeste Evans.

Evans once thrilled audiences with her performances of dove magic – audiences which included Caroline Kennedy, Indira Gandhi, packed houses in Las Vegas, party guests at the Playboy mansion, U.S. troops in Vietnam, Alaska, Iceland, Germany, Malta, and Libya, and audiences of all ages on six continents. 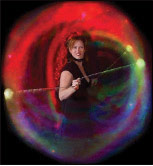 At magic conferences and conventions around the country, Celeste and her daughter, Evanna (a nurse in Charlotte, NC with a penchant for healing with an extra dose of laughter), thrill audiences with Q&A sessions about Celeste’s star-studded life and career. These Q&A sessions, as well as Celeste’s memoir, I Can Still See Me, offer a glimpse into her life of high adventure, celebrity, rough road trips, televised performances, sold out shows, and challenges as a working mother.

Celeste is originally from White Rock, British Columbia, and decided to learn magic when two ‘punk kids’ (boys, of course) declared that it was a career for men only. That was all the impetus Celeste needed.

Through dogged determination, late nights, constant practice, and honing the consistency of her brand, Celeste rose in the ranks of the magic world. Her bodacious body, scantily clad in skintight strapless dresses left little to the imagination – with the exception of where she kept the doves which appeared during her act. She quickly became the most famous female magician of her time, and the first female magician to headline in Las Vegas.
Despite the accolades, it was very much a man’s world. As Celeste says, “The hardest thing about being a female magician was being a female magician.”

Celeste knew that the uniqueness of her act was in her aura of sensual mystique. She quickly developed her own style and image – complete with racy costumes, a strict low-calorie diet consisting of black coffee, hard boiled eggs, bananas, and a teaspoon of apple cider vinegar.

In a few short years, she became a regular on television shows such as Paul Winchell’s, Ed Sullivan’s, and a popular show in the  ’50s and ’60s (and later in syndication) called To Tell the Truth in which she escaped from a straightjacket in nine seconds and won $1,000. Later, Barbara Walter interviewed her on the 1970s program, Not for Women Only.
She performed at the Palace in New York, the Playboy Mansion in Chicago, and countless other venues across the country. Her fame landed her United Nations tours to Africa and the Middle East, and in some cases, due to the political instability in those regions, she had to perform on the back of a truck in case the group had to leave on a moment’s notice to avoid enemy attack.

Her participation in John F. Kennedy’s Cultural Exchange tour proved a pivotal point in her career. Not only did the tour include performances for royalty across India and Asia, but it also brought them to Vietnam during the heat of conflict.

The price of entertainment led her to a near-death experience in the hands of captors in the Belgian Congo. While she would have elected to skip that particular life experience, she says it was worth it to see the faces of impoverished African children fill with delight and wonder, even for just a few minutes.

Celeste’s balanced perspective not only drove her to accomplish far more than many women dare or dream to do – it also informed her opinion of motherhood and achieving a healthy work/life balance. 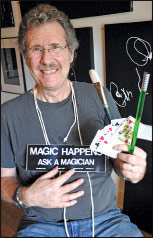 Another Old Northeast magician, Frank Lewis, knows Celeste well. They’ve been commuting to and from Tampa Bay Magic Club meetings together for years. “Celeste is an amazing person,” Frank says. “She’s stubborn, she never gives up. Women in magic during the height of her career – and in a lot of the entertainment fields – had to be really tough. Celeste and I both realized, through our very different paths, that we have a lot in common. Magic, just like art and science, gives you the ability to reinvent yourself.”
Frank is well known locally as an inventor, artist, and scientist. Ever since he started practicing lucid dreaming at age nine (without even knowing it), he has worked to create art through it. Very similar to an exercise that Salvador Dali frequently conducted, Frank draws while sleeping very lightly, an activity likened to sleepwalking. Dali described the exercise as a way to unlock the vast imagination one has while dreaming, in order to bring new inspiration into his art. Frank’s lucid dreaming art does the same. He now has a gallery on Central Avenue with other local artists. Visit his website, TheDreamist.com, to learn more. Frank sums it up best: “When you think about it, magic, science, art – they’re all the same thing. It’s about capturing the imagination with childlike wonder; searching for truth and beauty.”

Celeste reached a milestone in the search for truth and beauty when she married agent Harry Breyn and, shortly thereafter, welcomed their children Evan and Evanna. Both children joined their mother as part of her act, and each picked up various skills along the way, from illusions to acrobatics to clowning to poi (a Maori tradition of tethered, weighted balls swung in intricate patterns at various speeds). Celeste happily shared the spotlight with Evan and Evanna, and taught them an important magic lesson: self-preservation.
“In magic, nothing is sacred,” Evanna explains, her mother nodding vehemently in agreement. “You see something one day, and the next day it’s incorporated in someone else’s act with very little changed.” 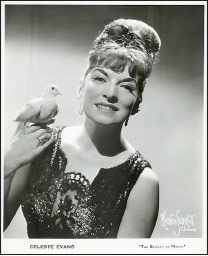 Recently, magicians Penn and Teller won a suit against a copycat magician in Belgium who not only performed their exact trick on YouTube, but also offered to reveal how the trick is done for a price of $3,050. Teller had registered his trick with U.S. Copyright Office in 1983, complete with diagrams, images and explanations, providing proof that he had originated the trick prior to the man in Belgium who copied it. Though he wasn’t the first to sue in such a manner, his victory in the legal systems is seen as a turning point in the magic community – a delightful and long-awaited pivotal moment for a growing industry.

Televised magic events by Criss Angel, David Blaine, David Copperfield, and many others continue to bring magic to a wider (and younger) audience. Both Celeste and Evanna insist that while the magic world still feels like a small world, it’s retaining its foothold on young, curious minds. As Frank Lewis says, it’s all about capturing the wonder of the imagination.
“There will always be the grandfather who pulls the coin out of his grandkid’s ear, and the grandkid with a burning curiosity for how it’s done. It’s something for the puzzling minds of today’s generation. And the more they see things like the televised magic, it brings it closer to home – in their homes,” Evanna says. “Magic is one of those few things where you can go to a convention and see a nine-year-old showing a ninety-year-old a card trick, and vice versa. It gets people of all ages together and learning from one another.” 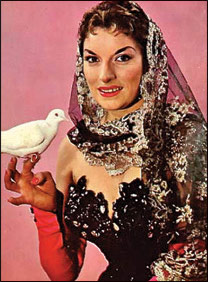 When asked for their advice to magicians young and old, Celeste and Evanna offer this: find your brand, what makes you unique, different, and memorable, and stick to it. And even more importantly, practice constantly. Nothing provides flow, panache, and comfort on stage like constant practice.

Additionally, magicians of every age must remember that everyone makes mistakes, even the greats, as Celeste has chronicled in her other book, Has This Ever Happened to You? A Collection of Magicians’ Faux Pas. The most successful magicians abide by Winston Churchill’s advice: never give up.

Though she garnered fame throughout her career and the title, the Queen of Magic, Celeste maintained her focus on balancing work and life. Happiness was always the top priority – being a mother, enjoying her work, and working hard at both of those roles. Celeste’s joie de vivre is as inspirational as her stories and her legacy.

“Magic is a hard life, but there’s nothing else like it,” she says, smiling. “It can show you the world.”

Today, as she sits at magic conferences, books piled high on the table around her, she autographs glamorous portraits with a firm grip on the pen. She holds them out to the recipients with a broad grin that vaguely mirrors the brooding, sexy starlet staring back from the glossy paper. But the one at the desk is the real Celeste – by Frank Lewis’ description, an indomitable force of positivity and determination.

Celeste’s trademark dedication says it all: “Success – but happiness first.”